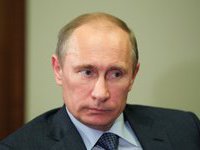 Russian President Putin knows a lot more about Syria than our President Obama does. President Putin wrote an op-ed piece for the New York Times a few days ago. He presents a well-written article on his perspective of the Syrian situation. Here is a link to that article:

I don't want to belittle our prez when he's in the middle of a world crisis but I don't have to - he's belittling himself with a lack of follow-thru regarding his "red line" comment about Syria's use of chemical weapons - he seems to be caught in a storm of vacillation. This is reminiscent of when he was an Illinois state senator. He often voted "present" because he could not make a "yes" or "no" decision. This particular juncture of international politics is where Putin's warrior spirit and Obama's pussyboy spirit meet. Guess which one will win?

Now, if there was ever any doubt, the entire world knows that our President Obama is indecisive and has no concept of military strategies or tactics. His involvement in Syria is over two years late. I'm curious - I know that Valerie Jarrett is actually taking care of many of the presidential duties - but is she behind all of this presidential dithering? One thing is certain - a far-left liberal, socialistic-leaning, pacifistic, gay-loving, Saul Alinsky follower cannot a commander-in-chief be - that would be oxymoronic.

It is interesting to note that Russian President Putin is leading his country away from the suppressive environment of communist-based totalitarianism and into the refreshing atmosphere of a democracy-inspired market-driven economy. He is doing an incredible job of improving the lives of the Russian people. Is Putin perfect? Hell, no -- only God is perfect. But Putin is way ahead of whoever is in third place.

President Putin is now the world leader in solving the Syrian crisis. And I think that that is a good thing. He is an expert on international policy in general and on Syria in particular -- President Obama is not. Putin is a firearms expert and Obama is not. Obama has a strong domestic agenda for America but he is clueless when it comes to foreign policy. And Obama's domestic agenda is, ironically, based on socialist principles - a political system Putin has rejected. Obama is a weakling and Putin is a he-man.

Secretary of State John Kerry and Obama are both trying to grapple with our international problems with their eyes wide shut. Luckily, Putin, who always pays attention, seems to be on the right track. He took Kerry's bumbling comment about Syria's giving up its chemical weapons stockpile to the United Nations, claiming it could never happen, and shoved it right back up Kerry's ass. This situation caught Obama by surprise. Fortunately for all, Putin is a leader of men. Thanks to his lightning-quick thinking and decisive action - we seem to be on the way to a solution. Would I have preferred that Obama solve the problem with a rational solution? Of course - I'm a patriotic American -- but I have been a long-time fan of Vladimir Putin thanks in part to a martial arts buddy, former UFC heavyweight champion Oleg Taktarov. I feel no animosity toward Putin - I have openly admired him for years. And the Stalin era is ancient history -- Americans need to get over that.

This clearly illustrates several points: Putin is more intelligent than either Kerry or Obama who both have high-average IQs as accurately as I can tell, around 115 on the Stanford-Binet scale - the same category as JFK. I am aware that Fox News Channel pundit Bill O'Reilly claims that Obama has a brilliant mind. O'Reilly, of whom I am a fan, is flat-out wrong in this case. When asked by a friend how I know that Obama is not highly intelligent my response was, "Because I listen to what he says - not how he says it. He's a dumb shit" And I do my own research. Obama was never a university professor. He was a lecturer and a senior lecturer.

Putin, as near as I can tell, is in the intellectually gifted category. He got his initial university degree in international law and went on to get a PhD in economics. And he has real-world experience in his early career choice - the KGB. He had to put theory aside and deal with his opponents on a pragmatic basis as he rose up in the ranks to Lt. Colonel. Once Putin entered the political arena, his no-holds-barred style proved very useful. His keen mind and strong martial arts background were the perfect complement to him. In addition to Russian, Putin speaks English, French and German.

US Secretary of State John Kerry, to his credit, speaks fluent French in addition to English. Obama, although he has openly criticized Americans for their lack of interest in foreign languages, speaks only English. This gives Kerry the edge on international issues - learning a foreign language opens the door to foreign cultures. Obama's early Indonesian Muslim upbringing does not seem to have helped him in understanding other cultures.

I see Putin loosely as Russia's equivalent to our President Regan. Putin is decisive and is a man of action -- he lowered taxes in Russia, instigating a flat tax for both personal income and business and helped lower the unemployment rate. Now the Russian economy is improving despite global economic problems.

Our President Obama never owned a cap-gun as a child, never owned a BB gun and never became involved with firearms. He never studied martial arts and was never in fistfights. He was more of a sissy as a youth but he was pretty good at conflict avoidance. He became good at talking his way out of fights and he occasionally ran away. Because he was unwilling to confront conflict directly, he never developed the fighting spirit so common to most Americans.

Neither did Kerry, even though, again to his credit, he was a lieutenant in the US Navy. However, he applied for and received an early discharge so he could run for congress. Kerry developed a strong penchant for conflict avoidance while in Viet Nam. He never understood that in battle, you are there to fight. He was famous for fleeing the scene of skirmishes. This may partly be due to the fact that he went to a Swiss boarding school as a child and spent a lot of time with the French who are mostly a bunch of sissies - also known as surrender monkeys.

I find it mystifying that Obama and Kerry, both of whom received their higher education in America, speaking standard American-English, cannot seem to communicate with clarity to each other. Certainly, when elements of foreign cultures are added, Obama is not the guy to get the job done. Kerry is better at international affairs than the clueless Obama. Obama is a pencil-necked geek who never made the first string in basketball, was too slow to run track and too frail to play football. His body language suggests gayness. In contrast, Kerry was a three sport athlete at Yale -- soccer, lacrosse and hockey. However, like Obama, he was a mediocre player at best - partly because is a low risk-taker. But he is an excellent skier, snow-boarder, windsurfer and stunt flyer - he is licensed to fly nearly anything. On script for a low risk-taker, he did chicken-out when he attempted to fly under the Oakland Bridge. Oh, well. But, what happened to his face? My sympathies.

I suggest that our politicians stop calling Putin a thug. Do a little of your own research -- speaking of Putin in that way is just flaunting your own ignorance. And Senator John McCain - just shut your yap. Even though I agree with your lovely daughter Meghan that you are a badass -- you are so old school. Retire and devote yourself to your beautiful wife Cindy and listen to Meghan - she has a wonderful sense of humor and is politically savvy. But, I must give you credit for being the only politician whom I have ever witnessed giving a straight answer to an interviewer. You were on a talk show a few years ago and Letterman or Leno asked you several questions. You replied to each question with a yes or a no. Then you explained the salient details. That was brilliant. Others need to take an example from that. And Senator Lindsey Graham, whom I think is gay, is an embarrassment to most Americans. Graham has a talent for saying what his immediate audience wants to hear. He should listen more and yammer less. And he needs to take a lesson from Obama - get a beard.

Anyway, since Russian President Vladimir Putin has become involved; the situation in Syria should improve. We thank him for that. I hope he helps with Iran as well. Iran could be a huge problem with its nuclear situation. Once Obama is out of office, I hope that our next president will further strengthen our alliance with Russia - this would be a good thing for the whole world.

Note that for perspective, I'm a lifelong martial artist, have had scores of fistfights, winning nearly all of them, and I'm a handgun and rifle expert. I notice that Putin, who is a marksman, is right-hand dominant but aims with his left eye. My friendly advice to him - always keep both eyes open when you shoot no matter which eye is dominant. If you ever get to Phoenix; I invite you to go out to the shooting range with me and I'll go over the benefits of so doing.

Ron Bryan, a CU alumnus, is a registered Independent in Arizona and he holds libertarian conservative, or, Conservatarian views. He's a former mental health care provider -- he was a councilor and designed and ran the Group Therapy program at the Boulder Memorial Hospital psychiatric unit. His professional background also includes journalism, military weapons projects, the entertainment industry, Emmy and Ace awards and book authorship