Since September 2014, NATO pilots have made several thousand sorties targeting Islamic State (IS) objects, according to the information published by the US Congress the day before Russia has joined the operation in Syria. Still, in the entire year after the start of their airstrikes, the United States failed to achieve any success. IS terrorists just keep advancing.  Many analysts believe that the US air forces were hitting in the Middle East some other targets rather than those of the IS. Otherwise, they say, IS (banned in Russia - ed.) would be destroyed already, taking into account the sheer number of airstrikes. 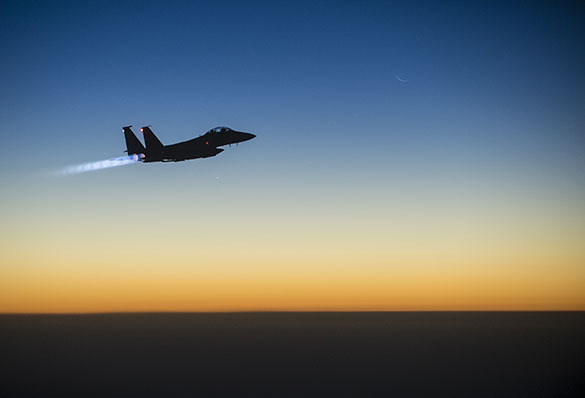 "One sortie is equal to one airstrike, and there were 7000 of them. Let's be realistic, such results of airstrikes are natural," chairman of the BoD in the National Association of the Unions of Retired Officers, Vladimir Bogatyrev, told Pravda.ru, when asked, intentionally or not Washington took mercy on the terrorists, or the US air forces just were unable to fulfill the task.

Currently, he said, the World War Two-style carpet bombings which destroy cities to ground are not used. Usually, today they use high-precision strikes of the particular targets. But the efficiency of those strikes was extremely low, due to two reasons, the expert added.

Also read: Military conflict between Russia and NATO may start in near future

"First, this was due to the lack of contacts between the intelligence and Syrian Assad's government army. Second, this is due to the lack of clear coordination between ground troops and reconnaissance system operating in Iraq, on one hand, and the Syrian government troops, on the other. Many targets likely were false, because it's very difficult to detect a real target in a desert. There are many underground facilities, false objects. This is why the efficiency of the US operation is so low and quite predictable", the expert said.

Bogatyrev noted that Washington, in effect, has admitted its defeat and agreed that Russia would take over the initiative. Still, the US will not stop criticize Moscow, he said.

Meanwhile, the expert turned down the option of the US air forces' weakness, saying that their combat capabilities have been the world's highest.

"They possess the warplanes of the high class, world's best high-precision weapon. We've got these weapons of the nearly similar level but, unfortunately, so far we lag behind by some parameters. The problem is, without interaction with the main structure which maintains the whole system of combat - that is, Syrian military leadership and Iraqi leadership - it's impossible to pin the required targets and hit them precisely. No doubts, the US hit some particular, perhaps minor, targets of the IS," Bogatyrev said.

Admitting that the Americans are rational people who wouldn't waste their efforts, Bogatyrev said that it is impossible for the US to achieve their objectives by the targeted airstrikes alone, as the IS employs an elaborated system of operational disguise, tactical disguise, misleading actions.

IS is not a state with densely populated areas but this is a desert, he reminded, saying that in that desert the IS warlords enforce their orders to the local authorities.

"Take an oil processing plant belonging to some Syrian or Iraqi company. Its profit has now been taken by the IS. IS is not a classical state structure, this is a distributed network of the groups which have seized certain sites. There is neither frontline, nor strongholds. Russian air forces started operating efficiently, because Syrian intelligence provided us with the information. I can suggest that Iraqi comrades also assisted us, as well as our space reconnaissance does," the expert said.

Bogatyrev hoped that US and Iraq intelligence would join collecting information about IS, which would let Russians uncover the principal sites to hit and to allow the Syrian army to start ground operations: "Air-force-plus-ground-troops combination will bring about the results. Air strikes alone will not".

The expert did not rule out that active strikes in the Middle East have been promoted by the West's military-industrial business.

"Even France and Australia joined the operation. Still, all their organizations did not undertake any measures to use modern means of reconnaissance and to strike the groups which have seized towns, roads, other IS infrastructure. The US chose the worst tactic: on one hand, they bomb IS; on the other, they don't want to weaken the terrorists' pressure on Assad," he said.

This is not how a war is carried out, Bogatyrev believes.

"That may lead to Syria disintegration like one that happened in Libya, where there are now about four semi-governed and non-governed parts of the former state, once serious and big. In general, Libya has been bankrupt, with oil goes abroad, which is beneficial for trans-national corporations," he stressed.

Syria's closest neighbors - Saudi Arabia, Qatar, Turkey, as well as the US and, to the degree, France, Italy, Britain - are very much interested in Syria to cease to exist as a state, according to the expert.

"All the rest is just hot air that they allegedly want democracy, or are worried about bloodshed and terrorism. They only need uranium, natural resources, oil, enormous natural gas deposits. This would harm Russia and Iran, as it happened in late 1980s, when the war against Iraq started. Those time the given strategic aim had been set up, today it's being implemented," Bogatyrev said.

"Those countries act openly and dishonestly. God allows we could prevent that, to bring about order and save those people and their once richest countries - Lebanon or Syria".