Four parties may count for success at next year's elections to the State Duma (Parliament) of the Russian Federation: United Russia, the Liberal Democratic Party, Just Russia and the Communist Party (CPRF). So-called smaller parties have a chance too, although their representatives can count on success only in single-mandate constituencies, political analysts believe. 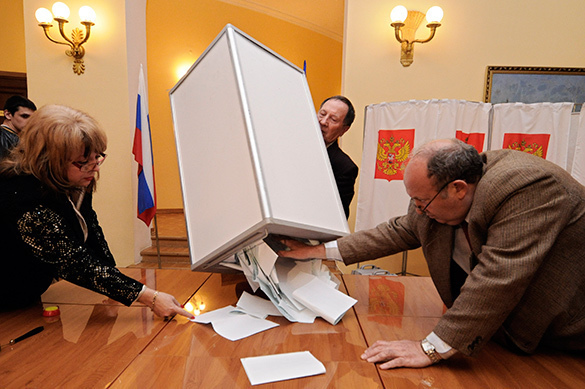 These are the conclusions of the single day of voting that took place in Russia on September 13, 2015. The single voting day is also known as a rehearsal for parliamentary elections in Russia.

Residents of 23 Russian regions went to the polls to elect governors. Some territories elected MPs of local parliaments or legislative assemblies of subjects of the Russian Federation.

About 100 candidates from 16 parties were registered for gubernatorial elections.

With regard to elections of regional governors, the Irkutsk region turned out to be the only region to hold the second round of elections on September 27. Acting Governor Sergey Yeroshchenko (United Russia) gained 49.60 percent of the vote, and his closest rival, Communist Party candidate, Sergei Levchenko, received 36.61 percent of votes.

LDPR leader Vladimir Zhirinovsky, commenting on the results of gubernatorial elections, said that United Russia might lose four regions. Zhirinovsky said yesterday that the election campaign was "quiet in terms of the general atmosphere."

"Our citizens had the choice, meaning that the campaign was a competitive one. Maybe it was boring for political consultants and political scientists, but it was not boring at all for candidates," secretary of the General Council of United Russia, Sergei Neverov, said commenting on the results of elections.

The demand for the opposition in the elections is being met with the help of CPRF, LDPR and Just Russia - there are no new parties that can play such a role.