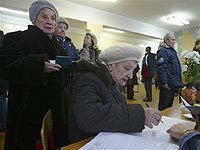 United Russia may receive 238 deputy mandates as a result of the parliamentary elections in Russia. Vladimir Churov, the chairman of the Central Election Commission of Russia, said that United Russia had received 49.54% of votes. Communists received 19.16% - they can count on 92 mandates in the new parliament. Just Russia received 13.22% which is enough for 64 mandates. LDPR gained 11.66% (56 mandates).

Three parties will not be represented in the Duma. Yabloko gained 3.3%. Patriots of Russia - 0.97%, Right Cause - 0.59%. This result was expected, although. Since Yabloko gained 3.3%, the party will be able to receive financial support from the state.

Four parties were expected to win the elections to become the members of the new Duma. Experts had doubts about the chances for Just Russia party. However, the party managed to improve its results in comparison with the elections in 2007.

Communists and Liberal Democrats were also more successful than they were during the previous vote. However, the leaders of the parties did not hesitate to follow the tradition of reporting numerous violations. Gennady Zyuganov, the leader of the Communist Party, was especially predictable. Zyuganov told reporters that he had not seen so many violations even during Yeltsin's stay in power. It goes about the process of the voting and the calculation of votes. Vladimir Zhirinovsky, the leader of the LDPR, also expressed his concerns about the voting. He claimed that his party was supposed to get not less than 30% of votes.

Such statements did not surprise anyone, though. Mr. Zyuganov labels every election "the dirtiest of all time" no matter how his party performs. It would have been strange if Zyuganov had not said anything about fabrications and violations this time.

Just Russia's leader Nilokai Levichy and LDPR faction leader in the State Duma Igor Lebedev announced their intention to establish a coalition with United Russia. Just Russia, Levichy said, is satisfied with United Russia's suggestions for solving various problems in the country, the social problems in the first place. Liberal Democrats seek equal rights in the coalition with the ruling party.

United Russia may not need this coalition, though. The party already has the majority of seats in the Duma, which is enough for passing the majority of laws. A coalition could be required only if it goes about the constitutional majority (2/3 of the deputies).