The anti-Russian campaign in Western media is gathering pace. What can Russia do to resist this campaign on the international arena and inside the country? Pravda.Ru editor-in-chief Inna Novikova asked this question to Director of the Center for Russian Studies at the Moscow University for Humanities and the Institute of System Strategic Analysis, historian, sociologist and publicist Andrei Fursov. 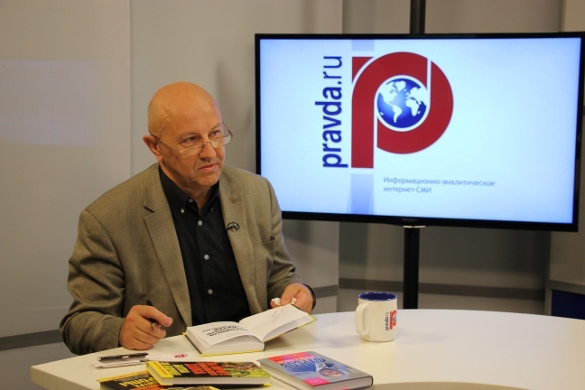 "Firstly, we have to be strong because the world respects only the strong. In general, the current anti-Russian frenzy is far from being news. The systematic information war against Russia, the Russophobic campaign, began in the 1820s. It was the British who started it as they were getting ready for the Crimean war. In general, the campaign against Russia has never stopped since that time. Today, Russia is losing the media warfare - we do not have great skills in this type of war.

"At the same time, we have progress inside the country at this point. Remember how the Russian media were behaving during the Chechen war, especially the first one? Yet, the situation changed dramatically when Georgia attacked Abkhazia in August 2008. The change could also be clearly seen in the media coverage of the Syrian and Ukrainian conflicts. During the Ukrainian crisis, the state-run media crushed the fifth-column media inside the country. This is a very important aspect, but this is not enough.

"Since late 1970s, I have been reading about 60 Western publications regularly - that was a part of my job. From my personal experience I can therefore conclude that the content of those publication was all different during the 1970s and the 1980s. However, I developed the feeling during the 1990s that all those publications - Italian, German, American, French and so one - started playing one and the same record in their materials. Western journalism came to a standstill at the turn of the XX-XXI centuries and was replaced with propaganda: everyone write absolutely the same. A very powerful propaganda machine started working in the West, and Russia needs to set its own propaganda machine against the West. To succeed, however, one should exclude the "fifth column."

"Today, the notion of the "fifth column" has become vague. Who is a part of this "fifth column" and who is a normal, adequate objective critic of the shortcomings that we still have?"

"The "fifth column" is very easy to define. When a person criticizes disadvantages in their country - that is just fine. But if he or she persistently expresses a certain position that coincides with the position of the US State Department, then this person is not an opposition activist, but a representative of the US State Department in our territory - this person is a member of the fifth column.

"The new military doctrine of the United States says that in today's world there is no boundary between war and peace. The psychological information war never stops, and the propaganda machine is a part of the military machine. Therefore, one should act according to the rules of war in this situation."

"What about the social networks and their activity in all this?"

Facebook is a product of the Pentagon and the CIA

"All the talk about Facebook and other networks being the inventions of genius "geeks" is nothing but a total lie. These young men have the Pentagon, the CIA and the military-industrial complex behind them. Actually, the Internet emerged as a by-product of military programs.

"I'm not an Arabist by profession, but the Arab Spring has interested me as one of the general processes of the information war. You have no idea how many small groups have been created to study the blogosphere of Arab countries three or four years before the Arab Spring. By the way, there is an American project the purpose of which is to study the Russian blogosphere."

"It just so happens that it is young people who will stand in the breach. Do you think they will be able to withstand it?"

"I teach at two universities, I surf the Internet, and I can say that the present-day generation of 20-30-year-old Russians, despite all the propaganda, is much more patriotic than their peers were during the 1990s or in the beginning of the 2000s.  Life changes, but the principle on which life determines consciousness does not change. We still have a lot to do to feel safe."