Russia has seven years to return to South Africa 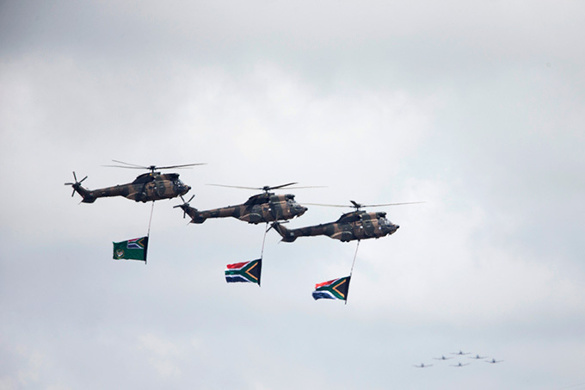 "There is a curious fact about South Africa. Only 15 percent of the territory of South Africa is arable, but the country is self-sufficient in terms of food supplies and even acts as a food exporter. South Africa's GDP is a quarter of the total GDP of African countries. South Africa is one of the most developed financial market in the world."

"Indeed, South Africa combines all advantages of the black continent. The country is rich with natural resources, it has beautiful nature and very favorable climate for life.

"As soon as diamonds and gold were found in the country, the largest colonial power of the time - Great Britain - showed its active interest in the country. This led to the suppression and exploitation of the local population. The system of apartheid that legalized racial discrimination had appeared by 1948. There were people of the first grade, second grade and third grade.

"Apartheid is a very complicated thing. The essence of apartheid is not just about the suppression of someone. Apartheid stipulates for separate development of all ethnic groups. In 1994, the country held its first free elections won by the majority, led by the African National Congress.

"The African National Congress came to power after 40 years of underground struggle, in which thousands of people died. The armed struggle that was supported by the Soviet Union, the political and humanitarian support provided by the Soviet Union, plus economic sanctions imposed by Western countries - all this created a wonderful cocktail that is called modern South Africa. Today, even opponents of the ANC, both within South Africa and in the West, acknowledge that the South African government consists of highly effective managers."

"South Africa is ranked first in the world in terms of gold reserves - 90 percent on the vanadium group. The republic has a variety of strategic materials that are vital for the aerospace industry. Russia and South Africa enjoy an overwhelming advantage on a number of important minerals. However, Russia was pushed aside from this market. Soviet leaders, starting with Gorbachev, denied Nelson Mandela entry to the USSR for seven years. That was a finely calculated foreign policy course of our enemies to break the friendly relations between Russia and South Africa. In the early 1990s, there was a clearly strategy to disrupt cooperation between Russia and South Africa.

"South Africa is ready to cooperate with Russia, they propose projects and generally show a lot more energy in efforts to build cooperation with Russia. China is making serious steps in South Africa as well. South Africa is a long-term investment. The government and the state must be seriously interested in developing this market."

"Do you think we have lost the chance?"

"Not yet. Russia will have five or seven years to take advantage of this. In South Africa there are still people in power, who remember the contribution of the Soviet Union. For example, South African President Jacob Zuma received military training with the participation of Soviet military specialists."

"Do yo think the cooperation within the BRICS bloc can do to help? South Africa is the strongest country on the continent, but does it have the right to speak for the whole continent?"

"Yes and no. Africa comprises more than 50 countries represented in the African Union, and all of them are absolutely equal in political terms. South Africa is a part of the BRICS bloc on an individual basis, similarly to how Brazil joined the association as a Latin American country, and Argentina is showing interest in joining the bloc as well."

"How profitable is South Africa's BRICS membership for Russia?"

"Russia needs to develop cooperation in all spheres, both bilaterally and multilaterally. Now there is a new BRICS bank being established. Russia is investing in the project, so we should take efforts to have South Africa involved fully so that they benefit from this economic cooperation too."

"Is there anything that Russia can offer?"