Americans have a right to act stupid?

John Kerry set off on his first tour of Europe, this time as the Secretary of State. The trip was carefully prepared by Kerry's advisers and initially was planned as an introductory tour. During his the first speech in front of the students at the Berlin University, Kerry misspoke and incorrectly pronounced the name of a country. Was it a deliberate slip of the tongue, or is the Secretary of State not familiar with the detailed map of the world?

John Kerry was expected to meet with the heads of nine countries and participate in a press conference. Kerry planned to inquire about the opinion of his colleagues on the exciting world issues such as the Palestinian - Israeli conflict. Last Sunday, the new Secretary of State arrived in London. 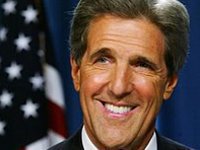 The tour would have not made it to the front pages of European newspapers if it hadn't been for a funny incident that happened in Berlin, Kerry's second stop. Speaking in front of the students at the Berlin University, Kerry began to talk about democracy and moral values, and expressed his personal opinion on the matter. After the conference, world media presented headlines stating that the American "freedom", according to the U.S. Secretary of State, is the right to stupidity.

John Kerry could not imagine what reaction his response would cause and how much attention will be drawn to the current tour. Now, apparently, the entire world is looking forward to the "gems" from the U.S. Secretary of State. He said at the Berlin conference: ""People have sometimes wondered about why our Supreme Court allows one group or another to march in a parade even though it's the most provocative thing in the world and they carry signs that are an insult to one group or another. The reason is that's freedom, freedom of speech. In America you have a right to be stupid, if you want to be." This idea was immediately caught by journalists, and the same day made it to the headlines of foreign publishers. Perhaps, Kerry should be given a benefit of a doubt since he might have meant something different.

Yet, the statement that followed refutes any doubts and makes one wonder about Kerry's worldview. He said that this right was "a virtue" worth fighting for.

Does the American Secretary of State really give the Americans the right to stupidity and is proud of the privilege? This is the strangest statement the world ever heard.

The talks about the new U.S. Secretary of State will not subside any time soon, especially because this is not the first embarrassing incident for the politician. Many journalists immediately remembered his past speech, in which he expressed his knowledge of geography and called Kyrgyzstan with a nonexistent name "Kyrzahstan."

Kerry confirms his words with a good example. The Americans do have a right to be stupid, especially if a representative of the government shows a great example.

John Kerry made this mistake during a speech at a university in Virginia. In front of a large student audience, he told the youth about the brave State Department, supporting democratic institutions in "Kyrzahstan and Georgia." This mistake was quickly edited and later corrected in the official transcript.

John Kerry is one of the most respected U.S. politicians, and has a reputation of an extremely intelligent and tactful person. Why did he admit such statements? Was it an accident, the result of nervousness or is this becoming a tradition?

Many high-ranking officials in the U.S. government entertained the audience with their "statements." President George W. Bush when giving a press conference for the Western media, confused Russia and Georgia, noting that external forces were making efforts to overthrow the legitimate government of Russia. A year earlier, George W. Bush managed to mix up Austria and Australia.

In 2010, former Alaska governor Sarah Palin in her speech confused South Korea with North Korea and then called the latter a "loyal supporter of the U.S. policy." Her running mate John McCain, too, made a mistake at an international meeting confusing Belarus and Lithuania, and calling Russian President Vladimir Putin the President of Germany.

Barack Obama back in 2008, during his election campaign, said that the United States consisted of 57 states. Once he said that, the country that invented automobile (alluding, of course, to the U.S.), would not turn away from him. Obama's statement is a mistake because automobile was not invented in the U.S. but in Germany in 1855 by Carl Benz. Everyone has the right to make mistakes, but not the president of a great country, speaking in public.

These and other equally interesting statements of American politicians responsible for foreign and domestic policies of the United States can be found on the Internet. Politicians and heads of state are, of course, the face of nations, and their thoughts express the opinion of the country. Let's hope that Kerry was talking about the stupidity of the Americans in the "smart" sense of this word, and then everything will be just fine, and the Secretary of State will be understood by both Americans and Europeans.