Nationalism is the foundation of any nation?

It is believed that the wave of immigrants has flooded Moscow because of low birth rates in Russia. However, Moscow is a Russian city. According to the census of the population of the capital since 1926, the percentage of the Russians has always prevailed. To date, it is 91.65 percent followed by Ukrainians that account for 1.42 percent. 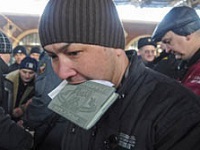 Could that be that Russians are unwilling to do low-prestige work?  This question was addressed to the deputy director of the Institute of CIS Vladimir Zharikhin. The expert believes that "Russians are willing to work at any job as long as the pay is good." According to Zharikhin, Russian businessmen have entered into a criminal conspiracy with officials and found an alternative cheap labor: "If Russian citizens refuse to work under the conditions that immigrants work under, they are right. If students were paid 20,000 rubles as genitors are paid, they would work. During the Soviet era students worked hard for very modest remuneration. All talk about low birth rate is initiated by the mafia formed around these immigrants."

President of the Academy of Geopolitical Issues of the Russian Federation, Doctor of Historical Sciences, Colonel-General, ex- chairman of the "Union of the Russian People " (Military Russian Imperial Union) Leonid Ivashov told a reporter of Pravda.Ru: "If we talk about the Soviet period, Moscow was an international city. Anytime and anywhere you could meet people of different nationalities. The purpose of visits to Moscow has radically changed. In those times people would come to study in the best universities of the world and the Union, to be closer to the great Russian culture, to something historically significant. Moscow was visited by prominent artists, musicians and actors. They all revered Moscow as the center of spirituality, science and culture. Today, alas, not the best representatives of other ethnic groups are coming here. They come with completely different goals of gain or feeding their families. I'd say that those who could not find themselves in their home country come to Moscow."

If Moscow is a Russian city, the visitors have to live by our rules. The Russians are not the only ones that believe that when in Rome do as the Romans do. An old African proverb says the same: "In a village where one-legged people live, one has to walk on one leg."

"It is important that all visitors comply with the rules of the life in a multi-million metropolis that are not much different from the rules of conduct in any other city in the world, whether it is New York, Paris or Tokyo," said Vladimir Zharihin.

"All visitors must live by the legal and moral laws," says Leonid Ivashov. "This is indisputable. The question is, who will ensure implementation of such a policy? They say, the Interior Ministry, law enforcement agencies, but you need to understand that if the problem is political, then it must be solved by politicians, including through law enforcement.

There is an issue of complete irresponsibility of the president, the government, the State Duma, the ruling parties and the head of the council. No one is responsible for public safety. During the Soviet times that we criticize, the head of the District Committee, Provincial Committee, was responsible for everything that happens on their territory. They had a powerful tool in the face of party members. Each of them was personally responsible even for a street fight.

Today they say that the police should be responsible. No, because it is only an instrument of policy. If you give them a command to catch five people, they catch them. If you give them a command not to touch them, they don't. There is another important point. The population of Russia in general and Biryulevo West, in particular, is removed from the management of their territories. I'm sure when a question was raised about the construction of the shopping center "Biryuza" the community has not been consulted. There were no surveys or a mini- referendum. The real instigators are not acting rioters, but those who open something for bribes, those who let go or justify criminals for a bribe.

- Where did the spirit of internationalism go? How did it happen that the friendship between peoples has disappeared?

"Today we have the power of the oligarchy and criminal organizations," said Leonid Ivashov. "We have a clan- oligarchic system of power. Ethnic conflicts promoted by the media occur in just those moments when social stratification reaches such a point that tomorrow there will be a conflict on the social grounds. To avoid this conflict, there is always a lever to transfer it to another plane, interethnic one. The policy of our government is fully consistent with the policies of the states and regions where the immigrants come from. Here we get slave labor and no social responsibility. Instead, migrant workers bring huge profits to all branches of government, including the council. By leaving their homes, they relieve social tensions in their regions. They do not need to create jobs and pay pensions. This is the balance."

Do you think that the concept of "Russian nationalism" is purposely designed to internally weaken our country? Maybe it would be far more logical to talk about patriotism and national pride that is humiliated?

"Nationalism is the foundation of any nation. Without nationalism a nation, therefore, the people, cannot exist. Another thing is a form of nationalism. It is either love of their land, their history, their culture and a willingness to protect it, or an opposition to other peoples and ethnic groups, national extremism or Nazism. There is nothing surprising in the fact that the Russians are nationalists. All representatives of all nations and peoples are nationalists," said Leonid Ivashov.

"Among the Russians there are rootless cosmopolitans also called pro-Western liberals. There are also extreme nationalists. But the majority is normal people. The Russians may even lack a few elements of nationalism," Vladimir Zharikhin said.