Why the West fears Putin

By Xavier Lerma. Part I 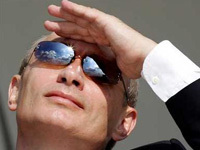 Russia's Prime Minister, Vladimir Putin, is a good Orthodox Christian but you would never know that from the way the West portrays him in the media. They have their own reasons for hiding this from everyone. Russia seeks expansion not as the atheistic monster from the Soviet Union, but as a Christian nation that overcame a turbulent and horrific past. Christians in Russia have survived Hell's fury from communism. The blood that once soaked the land was the seed for Russia's new destiny. The evil that spread from Russia in 1917 to the West will be destroyed by Russia's renewed faith that will heal the world.

American liberals hate the Tea Party and Christians in "public view". They demonize Sarah Palin, Michele Bachmann and ridicule Christians in America as crazed right-wingers. They danced when President Reagan, Jerry Falwell and Charlton Heston died. There is no longer a powerful conservative in the West the liberals fear. They know they can handle the majority of America through Hollywood and the entertainment media.

They control America as a toy captivates a child.

Putin has real world power, which causes the liberal media to fearfully ignore or warp his image. Like a good Christian King he leads a nation to Christ. As a small example, last February, Russia bought some land near the Eiffel Tower where an Orthodox Church will be built. The liberals don't want Russia's Christianity to spread and re-Christianize Europe. Liberals, like most Democrats in America, would hate Russia if they inspired and renewed Christians throughout the world.

With the World Cup coming to Russia in 2018, the writing is already on the wall and Prime Minister Putin seeks to expand to the West, not militarily but economically and more importantly, allowing the kingdom of Christianity to spread. One way to do that is to have a Visa free trade zone between Europe and Russia to stimulate the economy. Putin helped to bring the World Cup to his country and it is only logical to open the doors between Europe and Russia. RT reports about the Visa free travel here.

Putin told the Süddeutsche Zeitung newspaper, "Europe needs its own vision of the future. We propose to shape it together, through a Russia-EU partnership. It would be our joint bid for success and competitiveness in the modern world."

Senator John McCain is typical of those who stereotype Putin when he said, "I looked into Mr. Putin's eyes and I saw three things - a K and a G and a B".

McCain is insinuating that Putin, a former KGB agent, is an old hard line communist like the NKVD was under Stalin. McCain has read Alexander Solzhenitsyn and even did an article about him. However, he really knows nothing about Russia, Solzhenitsyn and Putin otherwise he would know why Solzhenitsyn would vehemently disagree with his KGB statement which I will prove near the end of this article.

He later said "I think it's very clear that Russian ambitions are to restore the old Russian Empire". I respect Senator McCain's service in the military and as a POW, but he is a typical politician. He makes Putin sound like Godzilla about to attack. McCain also opposed Russia's membership in the G-8. Putin is a straight talker and not a politician like McCain. Putin's reply to McCain was, "forego your threats until after you're elected." McCain did lose to Obama.

"John McCain funded by Soros since 2001"

It is necessary to note that McCain like Obama, received money from George Soros. McCain is known as one of the most liberal Republicans. I, for one, cannot trust anyone who deals with Soros.

Atheist Soros hates and fears Putin. When Soros sees Putin he sees his own end. Long ago I had heard that Soros' Nazi collaborating hand was in Georgia but I had no confirmation until later. Andrew Bolt from the Australia's Herald Sun wrote, "of course, Australia is only one of 50 countries in which Soros works. And his meddling here is nothing given what he's just done in Georgia..He then backed Georgia's former
justice minister, Mikhail Saakashvili"

Some westerners speculate Soros and Putin are a team. The truth is, billionaire Soros knows Putin would throw him in jail as he has done to other oligarchs who misbehaved. Even today Putin pushes greedy oligarchs to help their country. Do you think a devious man like Soros would allow Putin to tell him what to do? Last March, the UK's Telegraph wrote, "Not since he threw a pen at Oleg Deripaska has Russia's prime minister so publicly berated the country's richest billionaires"

There are many examples of the prime minister not being afraid to push the rich to help Russia. The World Cup is coming to Russia in 2018 thanks to Putin's help and he is also persuading the billionaires to invest millions for a new stadium, new high speed rail services and other necessary construction. Billionaire owner of the Chelsea football club, Roman Abramovich was told by Putin to pay for the World Cup. He will at least pay more than £500m for the new stadium outside of Moscow. In comparison, sport team owners in America, like the NFL owners, scheme to have the people pay for the stadiums through higher taxes.

The western media constantly portrays Russia as the same old Soviet Union. I understand their mistrust but they should learn at least to report the facts.

When Soros' Georgia attacked innocent civilians the same McCain said, 'we are all Georgians'. Remember it was the American media who told us on August 2008 that Russia was invading S.Ossetia and Georgia while insisting Russia was at fault and should be stopped. Condoleeza Rice kept referring to Russia as though it was the Soviet Union. AP news reported she said that the NATO alliance would "punish Russia". CNN quoted Bush telling Russia,"We strongly condemn bombing outside of South Ossetia". Reuters reported that Obama said, "Georgia's territorial integrity must be respected".

The American media was still eagerly blaming Russia for starting the war even when the young S.Ossetian girl Amanda Kokoeva went on Fox News and thanked the Russians for helping.

The truth was unveiled on November 2008 when Georgian President Mikhail Saakashvili admitted he did start the war. Oops! Did the American media or politicians such as Senator Obama, President Bush, Condoleeza Rice and McCain admit their mistake in condemning Russia? Did they acknowledge the thousands killed by Saakashvili? No, of course not. Admitting a mistake would lower credibility and network ratings.

Later, CNN did allow Putin to have his say but the damage was done in portraying Russia as an invading menace. On May, 2010, the European Parliament said Georgia, not Russia, was responsible for starting the war with South Ossetia: "The European Parliament supported the findings of a special report which says Georgia "triggered the war" with heavy artillery attack on Tskhinval."

I met Buchanan in 1996 during a fundraiser for the presidential election. He was against globalism then as he is now. Even he said that Georgia started the war. In his article, "Blowback from Bear Baiting"

he wrote: "Georgia started this fight - Russia finished it. People who start wars don't get to decide how and when they end." VIDEO

Why didn't America follow Reagan's path and keep her promises? Russia was like the South after Lincoln was shot. Without a strong leader, Russia was open to attack by the "New World Order". Buchanan further wrote:

"When Moscow pulled the Red Army out of Europe, closed its bases in Cuba, dissolved the evil empire, let the Soviet Union break up into 15 states, and sought friendship and alliance with the United States, what did we do? American carpetbaggers colluded with Muscovite Scalawags to loot the Russian nation. Breaking a pledge to Mikhail Gorbachev, we moved our military alliance into Eastern Europe, then onto Russia's doorstep. Six Warsaw Pact nations and three former republics of the Soviet Union are now NATO members. Bush, Cheney and McCain have pushed to bring Ukraine and Georgia into NATO. This would require the United States to go to war with Russia over Stalin's birthplace and who has sovereignty over the Crimean Peninsula and Sebastopol, traditional home of Russia's Black Sea fleet.

When did these become U.S. vital interests, justifying war with Russia?

The United States unilaterally abrogated the Anti-Ballistic Missile treaty because our technology was superior, then planned to site anti-missile defenses in Poland and the Czech Republic to defend against Iranian missiles, though Iran has no ICBMs and no atomic bombs. A Russian counter-offer to have us together put an anti-missile system in Azerbaijan was rejected out of hand.

We built a Baku-Tbilisi-Ceyhan pipeline from Azerbaijan through Georgia to Turkey to cut Russia out. Then we helped dump over regimes friendly to Moscow with democratic "revolutions" in Ukraine and Georgia, and tried to repeat it in Belarus."