Russia is in dire need of military bases

The United States has 500 military bases around the world, while Russia only has four plus two logistics points, editor in chief of Arsenal of the Fatherland Victor Murakhovski said in a live broadcast of Pravda.Ru. Even in this situation the United States strongly impedes recreation of Russian military bases, especially in Central Asia and in the Pacific Rim. 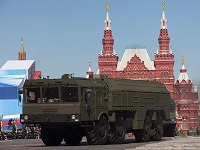 "Currently Russia has military bases in Tajikistan, South Ossetia, Abkhazia and Armenia. There are logistics points in the port of Tartus in Syria and in the port of Cam Ranh Bay in Vietnam. Now a similar military facility in Belarus is being established. So far it is unclear what it will be called," said Viktor Murakhovski.

The expert said that in Soviet times the country had a military base in Cuba with deployed land, mechanized infantry and armored units, air defense, and electronic intelligence. There were bases in Somalia and Ethiopia, in the archipelago Dahlak, and in some other places." Victor Murakhovski believes that today's potential is about 50 percent of the potential of the USSR. According to him, today the Americans who have 500 military bases in different parts of the world are trying to prevent the restoration of Russian military influence and placement of Russian bases in Central Asia and the Asia-Pacific Region (APR). This is evidenced by the story of the Russian military base in Kant, Kyrgyzstan. "The Americans tend to control the main trade routes of the Pacific where their main trading partners and powerful military powers are China, Japan, and Korea. Russia did not have anything in this region. Only recently Kamran was recreated," Murakhovski said. He added that the Americans also decided to leave the nine bases in Afghanistan despite the impending withdrawal of ISAF coalition forces.

"30,000 ISAF troops will be withdrawn from Afghanistan, but the bases will remain in the area under the pretext of creating training units for the new Afghan army. They will be fortresses that will control vast areas with fire," said Viktor Murakhovski.

The expert believes that widely criticized leadership of the former minister Anatoly Serdyukov did not affect the issue of creating new bases of the Russian Federation abroad. "I would not talk about Serdyukov so negatively. He acted in line with the course of the military reform developed by the Council of National Security and the Russian president before the 2008 events in the Caucasus. The events in South Ossetia forced a quick promotion of a military reform, a compact, professional army, always ready units, increased share of contractors, and humanization of military service. The Minister made certain mistakes in the field of military education, military healthcare, outsourcing (only in permanent locations), in the area of upgrading and establishing a normal dialogue with the industry, but these mistakes have been corrected," said the expert.

Victor Murakhovski explained that the cost of maintaining military bases is determined by bilateral agreements. "Russia bears most of the cost and undertakes the supply of arms and equipment, training of military personnel with respect to the host countries. As far as I know, we do not pay for maintenances of the bases like the Americans do, we barter."
The expert does not think that the military base in Armenia may be shut down. "There is a motorized infantry brigade there, battalion S-300, and air squadron. This base ensures the territorial integrity of Armenia."

The expert believes the position of the Russian base in Sevastopol to be unshakable and stipulated by an intergovernmental agreement. "Russia, in case of a conflict, will legitimately resist and will be supported by the population of the Crimea."

Victor Murakhovski noted that a high level of security in the country must be maintained, so the military budget should not be redistributed to social spending. Especially because for over 20 years sufficient funds were not allocated to the army, which has led to the fact that in the North Caucasus in the two Chechen campaigns instead of an army we had an unmanaged conglomerate of people in green uniforms.

As for the modern army, the tests conducted in the summer showed that it was in satisfactory condition, but it should be in a good or, even better, great condition. "The army has to be re-equipped, and an increase in spending on rearmament must be planned. One third of the funds will be spent before 2015 and two-thirds after 2015. The emphasis is on upgrading of reconnaissance and communications, aerospace defense, aviation, precision weapons, impact weapons and strategic nuclear forces, Russia's "sacred cow." In the next year over 40 new intercontinental ballistic missiles will be delivered to the troops," said Victor Murakhovski.

The use of unmanned aerial vehicles is becoming increasingly more important - no sanctions, no declaration of war. The Americans are flying over Iran to strike at Pakistan, Somalia, Yemen and other countries. Russian Federation will also pay more attention to this area.

The expert said that presence of Russian peacekeepers in Syria after Geneva-2 Conference was unlikely. "There were cases of attacks on Russian peacekeepers in South Ossetia, and everyone knows what it resulted in. Those who want to use peacekeeping forces for their own purposes really do not want the Russians present in Syria. Negotiators, especially from the West, will try to ensure that peacekeeping forces of the third countries are present, including India, Pakistan, and Japan," editor in chief of Arsenal of the Fatherland Victor Murakhovski concluded.
Lyuba Lyul'ko