Russian weapons coming to Brazil instead of American ones

The Russian military delegation headed by Defense Minister Sergei Shoigu flew to Brazil. The visit to sunny Brazil is based on the subject of arms supplies. The Russian minister also plans to visit Peru to discuss and sign contracts for the supply of arms in the total amount of about $1,7 billion. In general, Russia is strengthening its position on the arms market in Latin America. 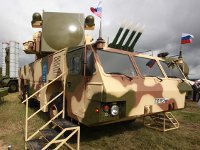 In Brazil, Russian and Brazilian officials will sign the previously discussed contracts for the supply of Panzir-S1 air defense systems and individual complexes 9K38 Igla worth more than a billion dollars. Shoigu will have a meeting with Brazilian Defense Minister Celso Amorim, Chief of Staff José Carlos de Nardi and possibly President Dilma Rousseff. During the visit, Rosoboronexport intends to offer Brazil to buy Russian fighter jets Su-35, including the possible transfer of technology for their production. The Russian minister will also discuss collaboration on the development of fifth-generation fighter aircraft PAK FA T-50.

The activity of the Russian side is based on Brazil's move to suspend the implementation of the signed contract for the purchase of U.S. F-18 fighter jets worth about $ 4 billion. The move is based on Brazil's dissatisfaction over America's total surveillance of the Brazilian president, government and public companies. However, according to the Brazilian press, the problem is that it is impossible to re-include Russia in the tender for F-X2, since Sukhoi design bureau with the same aircraft dropped out of the tender in the first round. If this tender is closed and a new one opens for F-X3, it may cause damage to reputation and possibly trigger a diplomatic conflict, the Brazilian newspaper Estadão wrote.

Russia, being inspired with Brazil's move not to sign the contract with the Americans, now intends to sell its Su- aircraft, offering the joint development of next generation T-50 aircraft. This military aircraft, which will be the core of the future Russian fighter fleet, was created with the use of stealth technology, which reduces visibility in visual, audio, infrared and radio frequency spectrum.

With the help of high-impact systems, it can penetrate into the areas of high risk. The plane is equipped with laser-guided weapons and a radar station with an active phased array antenna. According to the plans of the Russian government, the planes will start arriving in the Russian Air Force in 2016. Russia already has the experience of joint development of the T-50 with India. According to representatives of Indian company Hindustan Aeronautics Limited (HAL), which will be building the plane, the parties have completed the preliminary design of the aircraft, tentatively named FGFA. Negotiations are underway about its details.

"Our proposals are of systemic and complex character," Igor Korotchenko, chief editor of National Defense magazine told Pravda.Ru. "The air defense weapons systems that are being offered to Brazil, are very effective weapon, according to their performance characteristics, and we can assume, with high probability, that Brazil will sign the contract. As for the proposals for the joint production of the Su-35 and the development of the T-50, no one except Russia will make such a proposal to the Brazilians. No Western country will ever offer such a package of options with the transfer of technology. This means that the Russian Federation considers Brazil a strategic partner," concluded Korochenko.

In this context, the Brazilians could appoint a new tender for the purchase of fighter aircraft.

Noteworthy, the air force of Brazil has Russian multi-purpose attack helicopters Mi-35, another batch of which was delivered to the country from Russia in August under the contract with Rosoboronexport. In addition, during the visit of President Dilma Rousseff last year, Russian Helicopters holding company signed the first export contract for the supply of seven Ka-62 helicopters to Brazilian company Atlas Táxi Aéreo. This transport helicopter won the tender of the Brazilian national oil company Petrobras. In the future, the fleet of these helicopters will only grow.

The Russian delegation, which, in addition to Defense Minister Shoigu, includes Alexander Fomin, the head of the Federal Service for Military and Technical Cooperation, and Anatoly Isaikin, the head of Rosoboronexport, will also visit Peru before October 17. The delegation will meet with President Ollanta Humala and top military leaders of the country. Peru intends to buy from Russia 110 T-90S tanks and BTR-80A worth about $700 million, according to the Kommersant.

"This is an important visit. Our Army and the Air Force initially appeared with the cooperation and logistical support from the former Soviet Union, and today - Russia," said former defense minister and Congressman Daniel Mora. He stressed out the importance of Peru's rearmament and co-operation with Russia in the field of advanced technologies, including space.