An outbreak of African swine fever has hit Russia once again. Outbreaks of the disease have been reported in dozens of Russian regions. The disease inevitably entails the destruction of a huge number of domestic animals, leading to the reduction in pork supplies for domestic consumption and ruins the grandiose plans of Russian officials to increase exports to the world market. 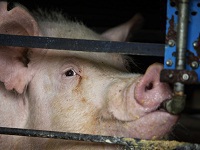 Vladimir Putin announced the intention to turn Russia into the world's largest supplier of pork in December 2012. According to the president, domestic livestock producers must supply the domestic market with their products and significantly increase exports. The president outlined the plans: Russia should deliver 200 thousand tons of pork to the world market by 2020. However, on the way to the execution of these ambitious plans, officials faced a problem that was not related either to the corruption component, or the lack of funding, or any other economic hiccup. The problem turned out to be a very down to earth one: An animal disease - African swine fever - can easily destroy government plans.

According to the Russian Federal Agency for Agricultural Control, Rosselkhoznadzor, swine fever has been reported on the territories of 31 subjects of the federation. In 2013, outbreaks of the disease were registered in North Ossetia, Voronezh, Rostov, Volgograd, Tver, Tambov, Saratov, Yaroslavl, Tula and Moscow regions, Krasnodar and Belgorod regions, which is considered the center of pork production in our country. The only way to fight the epidemic, that  cattle-breeders have, is the destruction of livestock. However, a question arises of why veterinarians can not predict and prevent an epidemic of animal plague in the 21st century?

"Of course, we can predict it, and everything is progressing according to the scenario that we predicted, unfortunately, assistant director of Rosselkhoznadzor Alex Alekseyenko told Pravda.Ru. - The situation is very dangerous indeed. This is due to the fact that in reality the roots are far enough in 2004, when an administrative reform took place and the veterinary service was literally split into regional and federal levels. The reform led to the creation of separate stand-alone veterinary services in all business departments. The situation has been unmanageable since then."

According to Rosselkhoznadzor, the segmental work of veterinary services can not protect the country from epidemics. The service was most effective when it was single and all its actions were coordinated. A good example to prove it is the outbreak of African swine fever in 1977 in the Odessa region in the USSR. At that time, the disease was suppressed quickly, efficiently, and it never returned. It is important to note that the timely prevention of serious diseases, such as swine fever and foot and mouth disease, which has been reported in the North Caucasus and in the Far East of Russia, helps the state avoid serious economic losses.

"Because of African swine fever, we lost more than 1 million pigs, so the economic blow is already very strong. They did not get to save anything, as they wanted to, when they dismembered the veterinary service, - said Alexey Alekseyenko, - because the compensation (not including everything else) for the pigs that had to be culled, amounted to 2.5 billion rubles. All this is happening because they made that decision in 2004, without consulting experts in the field of veterinary medicine."

In general, the control of animal diseases should be conducted on the international level. African swine fever and other dangerous diseases come to Russia's Far East from China and Mongolia, where they are transmitted by migrating antelopes. First and foremost, one has to change the Russian veterinary legislation, especially in light of the plans to improve the country's role on the global pork market. In this regard, Alekseyenko expressed a hope that in 2013, the people interested in the efficient operation of veterinary services will prepare a new law to change the situation for the better.