Russia drowns in 60 million tons of garbage a year

The problem of waste disposal in Russia is not just urgent and requires a quick fix, it has grown to the scale of a disaster. Authorized landfills, especially in the central regions, are already overflowing. At the same time, illegal dumps are multiplying. To prevent Russia from drowning in waste, it was decided to establish a new garbage processing industry. 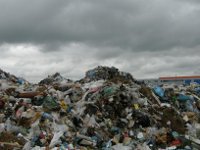 The proposal to create a separate branch for garbage recycling was made by the Minister of Natural Resources and Ecology of the Russian Federation Sergey Donskoy. Environmental concerns have been raised during the St. Petersburg International Economic Forum held last weekend in Russia's northern capital. The head of the Ministry named the extremely high level of waste and a very low level of processing the main reason of abundance of garbage in the country.

If government officials continue ignoring the problem, in a few years the Russians will live in a landfill, as it is now happening with the residents of Haiti, one of the world's poorest countries.

This is a sad example, but it is eloquent enough to understand the magnitude of the problem. So far Russia is at a much higher level than this poor Caribbean country, and prevention of the environmental disaster is still possible. A draft law prepared by the Ministry of Environment may be adopted in the spring of 2014. Its main goal will be to encourage maximum involvement of recycled waste into a closed loop. In addition, the document is aimed at reducing the loss of mineral resources, Interfax reported.

Today, the volume of recycled waste in Russia is only 11 percent. The Ministry hopes that in seven years it will reach 80 percent mark. By 2020 the recycling industry will be finally formed, and a sufficient number of recycling facilities will be built. The amendment to the law "On Waste" describes the source of funds for the construction of such facilities. Recycling of packaging can be incorporated in the cost of products. A tax fee of 0.4 percent of the value of the package was proposed. The money will be sent to the state fund that finances the establishment of waste recycling plants.

Head of the Ministry of Natural Resources Sergei Donskoy believes that the tax will not affect the inflation because this amount will be unnoticeable in the final cost of goods. According to expert estimates, it usually does not exceed 10 percent of the sale price.

At the "round table" on "Management of Solid Waste in the housing and communal services" held by the State Duma in March, the deputies noted a sharp increase in the number of illegal dumps after the abolition of licensing for collection and transportation of waste. During the debate a legislation establishing a ban on the disposal of waste without pre-sorting was proposed. At the same time, penalties for dumping garbage must be significantly increased in order to economically stimulate recycling.

According to the calculations of social ecologists and specialists of government structures, each year the average Russian "produces" a half a ton of garbage. Nation-wide, each year over 60 million tons of household waste is created. To date, only seven to eight percent of all collected municipal solid waste (MSW) is recycled and reused in one form or another. This is considering that approximately 40 percent of solid waste is non-food materials (paper, plastic, glass, and metal) that can be recycled and reused.

In the EU the program for separate collection and subsequent disposal of garbage has been ongoing for many years. No more than 20 percent of the garbage goes to landfills. However, in recent years garbage is often excavated, because, for example, Sweden has processed its own trash into heat and electricity, and wants to take waste from the neighboring countries.

The Ministry of Natural Resources believes that the low rate of recycling of MSW is associated with the lack of infrastructure. In Russia there are 243 recycling facilities, 53 sorting facilities, 40 waste incineration plants, and this number is not sufficient for the processing of all incoming waste.

This is used as an argument in the creation of the state fund, introduction of a tax on packaging and financing the formation of waste recycling industry. However, in 2004 the responsibility for municipal solid waste was transferred to municipal authorities, and it is not entirely clear how financial and industrial cooperation will be established at various levels. Most likely, the details will be described in the draft law, which, according to Donskoy, will be presented to the State Duma in the fall.

The legislative initiative of the Ministry of Environment is correlated with the new EU Directive on packaging, and at the same time points to the issues that lawmakers and processors are likely to face when implementing the initiative. According to the EU directive, starting 2014 European manufacturers will be obliged to use packaging that is not excessive for the intended use and is suitable for recycling, using as fuel or composting.

According to Eurostat data, the amount of waste in the form of plastic packaging in the EU-15 countries rose from 9.9 million tons in 1998 to 13.1 million tons in 2008. 40 percent of this volume has not been processed but sent to landfills.

The EU insists that the minimization of waste and reduction of the recycling cost should be included at the stage of packaging design. This is logical, because sometimes the only way to dispose of plastic is burning, which pollutes the air with hazardous substances deadly to humans and nature. The cost of waste is included by the manufacturer in the cost of production and leads to higher prices.