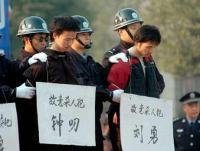 On the central square of the town of Kermanshah, Iran, two pedophiles, who raped a nine-year-old boy, were executed by hanging publicly. One of the perverts filmed the hideous crime on video. A crowd of people gathered on the square to watch the execution. As the two criminals were being hanged, the crowd was chanting: "Thank you, court!" and "Bravo!" As many as 145 people have been executed in Iran since the beginning of the year.

Iranian officials assert that the authorities execute only most dangerous perpetrators, whose crimes are fully solved and proved. According to official statistics, there were 179 people executed in Iran in 2010. In other words, the number of executions in the country grows.

Most often, Iranian courts execute criminals for drug-related and sex crimes. This year, over 85 from 145 people were executed on charges of drug trafficking and rapes. It is worthy of note that Iran practices death penalty for homosexual activities. Adultery, especially committed by women, is considered a grave crime in Iran too.

It has been recently reported that an Iranian court found a young Iranian female, Sakineh Mohammadi Ashtiani, guilty of committing adultery. The woman was sentenced to death penalty by stoning.

The woman has been living in prison since 2006; her execution has been delayed indefinitely. The sentence triggered an international scandal: even the UN General Assembly took the side of the poor Iranian woman. Icelandic Foreign Minister Össur Skarphédinsson stated that his country was ready to grant political shelter to the woman.

Iranian justice looks quite original from the contemporary point of view. Majid Mohavedi, a young Iranian, threw hydrochloric acid at the face of his beloved woman after she refused to marry him. The court decided that the man must be punished similarly. As a result, the court sentenced the man to have acid dripped in his eyes to blind him.

According to Iran's Islamic laws, such punishments are allowed after causing bodily harm to an individual. In Iran, even underage individuals can be sentenced to death penalty.

Eleven people were executed in the country on May 27th. According to Iranian news agency IRNA, the criminals were convicted of drug use and trafficking, armed robbery, kidnapping, rapes and murders.

Russian President Dmitry Medvedev has recently spoken about the need to toughen punishments for sex crimes committed against children. The president particularly put forward a suggestion to consider the issue about chemical castration for pedophiles. In Iran, they do not castrate, but hang pedophiles. Many Russians would probably chant "Bravo" to executions of pedophiles too.

Pharmaceutical prophylaxis of sex crimes is practiced in many states of the United States of America: California, Florida, Georgia, Texas, Louisiana, Montana, and others. Such measures are used in many countries including Canada, Israel, Britain, France, Germany, Denmark, Sweden, Poland and Norway. In the USA and Poland, the chemical castration of pedophiles is an obligatory procedure.

Iran is not the only country that uses death penalty for sex crimes committed against children. This type of punishment is practiced in South Korea, Iraq and Saudi Arabia. In other countries, such convicts are isolated from the society to life or for an indefinite period of time.

In general, death penalty was legally abolished in 31 countries of the world. China, Iran, Saudi Arabia, the USA and Yemen take the lead on the number of death penalties in the world. According to official information, there were 527 death sentences executed in 2010. It is lower than in 2009, when there were at least 714 executions conducted. However, as unconfirmed information says, there were several thousands of people executed in China in 2010.