China loves death penalty too much 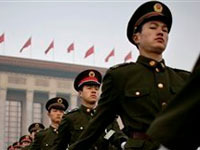 According to international human rights organizations, China is a country with the largest number of death sentences. However, the official statistics of executions in the country is kept secret. Currently seven Russians are sentenced to death in China, all of them are drug dealers. They still have a chance to survive.

Russian national Maria Lopatina who was sentenced to death by the court of a Southern China city of Zhuhai for drug smuggling with a two-year postponement of the execution can expect a reduced sentence. In the case of good conduct according to the Chinese law in two years her sentence could be mitigated to life imprisonment or a prison term of 15 to 20 years. The same situation is with other convicted Russians.

In theory, Lopatina may very well be transferred to Russia and serve her term at home. This is provided by the Russian-Chinese treaty of mutual transfer of sentenced individuals. However, this measure is used very rarely. In the disciplined China prisoners from all countries are treated the same.

In 2007, a resident of Glasgow Akmal Shaikh was arrested in the Chinese city of Urumqi. He was charged with possession of as many as four kilos of heroin. The British denied the charges until his last day. In 2007 he was sentenced to death with a two-year sentence suspension. No one believed that the man would be executed. Nearly the entire world rose to defend the British.

China's statement that the sentence will be executed at all costs led to sharp criticism of the UK and the entire world community. Yet, the Chinese side was affected neither by the addresses of his relatives, nor the Western human rights activists, nor an official letter from the British government. The British Foreign Office alone sent at least 10 requests for revision of the sentence to Beijing. However, despite all the efforts, on December 29 of 2009, the 53-year-old man was put to death by a lethal injection.

Last year four Japanese nationals charged with drug dealing were executed in China. The Japanese authorities had been addressing the Chinese Themis with numerous petitions for years. However, the Japanese drug traffickers have been executed.

A member of the International Bar Association, Igor V. Schmidt, Ph.D., commented on the situation for Pravda.Ru:

"It is true that criminals in China are treated with all severity. At some point I was an intern for three months at Peking University law school. I got to learn about law enforcement practice of the country and even visited Chinese prisons. I will say this: the highest level of discipline that exists in their prison system is striking. Criminals are well schooled and drilled. It is clear that daring and freedom-loving Russian people have hard time in those prisons.

Death sentence is provided by over 60 articles of the Chinese criminal law. For example, the death penalty can be given for financial fraud, pimping, violent crime, bribery, sale of counterfeit drugs, damage to electrical wires, unauthorized excavation of ancient tombs and a whole bunch of crimes for which in Russia one cat get no more than probation. I am not talking about corrupt officials or drug dealers.

However, in April of 2011, the agency "Xinhua" reported a reduction in the number of crimes for which capital punishment is provided. In particular, this applies to certain economic crimes. Adolescents and pregnant women are not subject to death penalty in China and now this amendment is true for people over 75 years of age. However, they still can be subject to death penalty if the crime was committed with extreme cruelty.

Interestingly, the official statistics of executions in China has never been published. But, according to observers, thousands of criminals are executed in the country every year. Previously offenders were shot, but now, as far as I know, more often lethal injections are used.

And here is a purely "local" flavor. The Chinese justice has never divided criminals into ordinary mortals and high-ranking criminals. That is, the Chinese Themis is virtually incorruptible, and it does not care about high positions or military rank. During my internship in Beijing in July of 2007, Zheng Xiaoyu was executed (I am not sure about exact spelling of his name), who served as the chairman of the state Management of China for Supervision of the Food and Drug Administration. This is a very high position.

Zheng Xiaoyu was convicted of accepting bribes totaling over 800 thousand dollars. The high-ranking official was also charged with death of 10 people who died from the use of poor-quality medicines for which he has issued licenses to companies producing drugs.

Another peculiarity of the Chinese justice is the speed of execution of death sentences. In Russia a trial can drag on for years. In developed countries, death sentence is always preceded by a long-term trial on different levels, and the convicted shall have an opportunity for an appeal. This often leads to the fact that years or even decades pass between the sentence and its execution. For example, in the U.S. Jack Alderman was sentenced to death for the murder of his wife on June 14, 1975 at the age of 24, and executed only on September 16, 2008 at the age of 57, or in more than 33 years.

So far there are 130 countries in the world that abolished death sentence, and 68 countries that retained and continue to use this measure."