Dmitry Medvedev annoys Japan with his cross-country trips in Russia

Russian Prime Minister Dmitry Medvedev visited Kunashir on July 3rd - an island of South Kurils. The Kuril Islands lay the foundation of the never-ending territorial dispute with Japan, which claims its rights for the Russian islands. Officials with the Foreign Ministry of Japan want the Russian Ambassador to Tokyo to clarify the reasons of Medvedev's visit to the island. 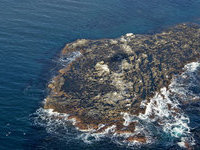 Medvedev visited the deep-water berth in South Kuril Bay. The PM headed for the berth complex immediately after the arrival on the island, Vesti.Ru reports. The port has already been launched. State-of-the-art vessels will be able to call at the new port after the construction is completed.

"We have purchased two large-tonnage vessels, which can operate independently at sea and deliver the products to the base," Konstantin Korobkov, the director of Yuzhno-Kurilsky fishing factory proudly told Medvedev.

"You've purchased the ships, but is there fish?" Medvedev wonders.

"Yes, there is - this region is very rich with fish," the official responded.

"Our neighbors have their own land, we have our own land. We are on our land and we catch our fish," the Prime Minister said.

Several hours prior to the trip, the General Secretary of the Japanese Government, Osamu Fudzimura, stated at a news conference that the visits of Russian officials to the islands are "incompatible" with Japan's position. Russia should be aware of that - the Japanese official claimed.

Japan's Foreign Ministry demanded the Russian Ambassador to Tokyo should present explanations regarding Medvedev's visit to the Kuril Islands.

The long-standing territorial dispute between Russia and Japan about the South Kurile Islands aggravated in November 1, 2010, when then-President Dmitry Medvedev paid a visit to Kunashir. The Japanese Government showed a harsh reaction to Medvedev's visit. Japanese officials stated that the visit could lead to negative consequences for the Russian-Japanese relations.