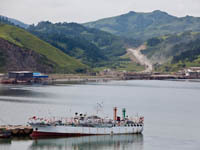 Russia's Foreign Minister Sergei Lavrov is to make a six-day visit to Japan in a few days. It is expected that the host county will focus on the ever-present topic of the status of the Southern Kurils.

The current visit of Lavrov will be held sometime after another demonstrative "inspection" of the South Kurils by a high-ranking Japanese official. On January 14 Minister of Foreign Affairs of Japan Kōichirō Gemba inspected the island from the deck of his ship, which gave rise to another wave of statements of politicians, public figures and journalists on the territorial issue between Russia and Japan.

Recently, the territorial issue for the Japanese has been more acute than ever (think "celebration" of the Northern Territories Day by the Japanese on February 7, 2011, abuse of the Russian flag and a bullet delivered to the Russian Embassy in Tokyo in an envelope). The situation is aggravated by repeated statements by the U.S. State Department of their support for Japan's territorial claims.

Russia confirmed a fair opinion on the inadmissibility of using the term "return of the islands", since such a statement carries a tint of unwillingness to accept the conditions of the postwar world. The proposed replacement term "voluntary transfer" on the one hand, emphasizes the benevolent attitude of the parties, and on the other hand, does not imply reconsideration of the results of the Second World War.

The vast majority of Russians do not accept the idea of ​​transferring the South Kuril Islands to Japan. According to a public opinion poll conducted by the portal Superjob.ru in March of last year, even in the wake of the general sympathy for Japan after a major earthquake, 75 percent of Russians did not consider it right to give the islands to Japan. After a possible transfer of the Kuril Islands to Japan border issues with countries such as China, Estonia, and Finland may escalate.

It is unacceptable both for the political leadership and for the citizens of Russia, most of whom have witnessed the dramatic events of the collapse of the USSR. In this regard, it can be argued that Russia in the foreseeable future is unlikely to change its position on the Kuril Islands. Nevertheless, the Japanese are unlikely to settle down.

After the collapse of the Soviet Union, Japan lost its role of a "Pacific aircraft carrier" for the U.S. and started searching a new role in the region. On the one hand, in the wake of the collapse of the superpower neighbor, the desire to return the "captured" territory was revived. On the other hand, the need to adapt to gradually diminishing role of Japan for the U.S. has emerged. That is why the development of economic cooperation between Russia and Japan occurred along with the toughening of the territorial demands.

The Japanese are attracted by the natural resources of the Kurils: 1,867 tons of gold, 9,284 tons of silver, the world's largest deposit of rhenium used in jet engines creation, deposits of natural gas, oil, sea rich in plankton, and ice-free straits of Vries and Catherine. For the country that always had scarce natural resources, the possession of these islands could play a positive role.

Russia, feeling the urgent need to attract investment into its economy, has repeatedly proposed "internationalization" project of the Kuril Islands, creating an Open Economic Zone and introducing visa-free regime for Japanese nationals at the islands.

This would open up a greater access to Japanese companies to the Russian Far East. In addition, the two countries have accumulated rich experience of cooperation in Siberia, where Russian companies along with the company "Mitsui" lead the development of the Elkon uranium deposits, and on Sakhalin Island, where the "Gazprom" along with the Japanese consortium Japan Far East Gas are designing a plant for processing liquefied natural gas and its transport to Japan.

The increase in turnover is quite obvious: in 2001 it was four billion dollars a year, and in 2009 it reached 30 billion dollars. However, against the background of progress in economic cooperation, primarily in the development of the natural resources of the Far East, it is odd that Japan does not see Russia as an economic partner in the Kuriles. Japanese political elite initiated the creation of "Association for the Return of Northern Territories", and is making laws indicating that the South Kuril Islands belong to Japan.

What is behind this paradox? On the one hand, the reasons must be sought in the nature of the Japanese elite. It is a corporate group, many of whose members descended from the politicians of the early to mid-20th century (a vivid example of this is the Hatoyama family, whose representative Yukio Hatoyama served as prime minister in 2009-2010, and his grandfather, Ichiro signed the declaration of 1956 with the Soviets) .

"New players" caught in this system have to play by the established rules. This reduces the area for maneuver in decision making, which explains the commitment of the Japanese to one course. Once in the highest echelons of power in Japan, the politician must demonstrate their unanimity with the common point of view, especially in foreign affairs that are extremely important for Japan.

Loyalty to the general course is required for members of both the Democratic and Liberal-Democratic Party. This is the way to instill the necessary group characteristics of the Japanese politicians. As a result, experience has shown that Japan's position in the Kuril issue has hardly changed since coming to power of the Democratic Party, and in the near future it is unlikely to be different.

With regard to Russia, the Japanese Foreign Ministry voiced the collective position of political and business elite of Japan, as well as part of transnational corporations and the U.S. that also has its own interests in the Kuril Islands. No softening of the Japanese position is expected. The topic of ownership of the South Kuriles will long continue to hinder the development of Russian-Japanese relations.

After a major earthquake on March 11 of 2011 and accidents at nuclear power plants "Fukushima," Japan's energy crisis erupted that has increased the demand for imported energy. In the current circumstances, Russia will become a major supplier of gas to Japan, providing an opportunity for the gradual recovery of the country. This was discussed during the talks between Prime Minister of Japan Noda Yosihiko with Vladimir Putin in September of last year.

However, no progress has occurred in solving the territorial issue, and the ministers once again only touched upon the need to solve this problem. The need for new sources of energy to Japan also increased due to the threats of Iran to block Strait of Hormuz and thereby interrupt the supply of oil (the share of the Middle East in Japanese imports is 87.1 percent). Russia, according to experts, can cover approximately 10 percent of Japan's import requirements. However, Tokyo does not agree with the Russian proposals.

Last March, the presidential envoy in the Far East Federal District Viktor Ishayev said that Russia made offers to a number of countries in the Asia-Pacific region for joint development of the Kuril Islands, and if Japanese companies do not participate, other investors from America, China, Brunei, Singapore, and Malaysia will be attracted.

This means that if Japan, as before, will not agree to jointly participate in the economic development of the Kuriles while maintaining them within the Russian Federation, it risks losing its leading position in the Far East of Russia and further exacerbating the crisis state of the economy. But the Japanese elite did not react to this warning.

The territorial issue for Japan is not just a disagreement with Russia (and not only with Russia, it has similar disputes with China and South Korea) on ownership of the islands. This is a deciding issue that determines whether or not Japan will be as successful and prosperous in the future as it has been in the past. It is also the question of the mentality of Japanese politicians who are very slow and reluctant to change.