Russia has developed the long-awaited military equipment for "soldiers of the future." It goes about first-class armor suit, which protects 90% of soldier's body surface from fragments, bullets and land mines. The tests of the new products called "Warrior" are set to begin in June. In 2013, if all goes well, the new equipment will be passed into service. 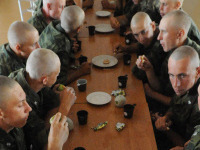 The new suit is 70% better than its predecessors. It was created by Kirasa Company from state-of-the-art Alyuteks aramid fiber. The suit made from the aramid fiber is designed to protect military men from fragments of mines, grenades, shells and open flame.

In addition to the suit per se, the "Warrior" consists of about 20 elements, including a special multi-layered helmet and body armor with ceramic armor plates. The ceramic plates are capable of stopping AK74 bullets and SVD automatic rifles, the Izvestia newspaper wrote.

What is more, the suit of armor blocks radiation in ultraviolet and infrared spectra, which makes warriors invisible to thermal sights.

The new equipment is considered to be ultra-light. The total weight of the standard set of the suit and the body armor of the previous, fifth protection class, is around 10 kg. The weight of the maximum set complete with helmet and combat body armor of the sixth protection class, as well as armored pads for shoulders and hips makes up about 20 kg.

The suit is transpiring and can be worn for 48 hours.

Defense Ministry officials have not spoken yet about the prospects of using the "Warrior" in the army. "Personal protective gear is necessary, of course. Many work over the military equipment and uniforms of the future, and we eye different samples of products, including foreign ones," an official representing Russia's ground forces told the Izvestia. According to him, the choice will be made only after all the tests are completed. The choice will be made in favor of the models that meet highest international standards.

On Monday, the Russian military delegation led by Lieutenant-General Nikolai Bogdanov flew to Italy "to share experience" in the modernization of military equipment, Itar-Tass reports.

During the trip, the officials plan to take part in the presentation of components of Italy's Future Soldier combat system.

The Future Soldier is an international project initiated by the U.S. and allied NATO countries in the late 1990s. Italy joined the program during the mid-2000s. Similar systems of individual protective gear are currently developed in the U.S. (Land Warrior and Mounted Warrior), Germany (IdZ), the UK (FIST), Spain (COMFUT), Sweden (IMESS), France (FELIN) and other countries, reports RIA Novosti.

Russian officials stated that the national analogue of the equipment of the Future Soldier would be designed before 2020.

A year ago, then First Deputy Defense Minister Vladimir Popovkin said that Russia was negotiating with France the purchase of a limited batch of FELIN Future Soldier equipment. Later, the Chief of the General Staff, Army General Nikolai Makarov stated that the Russian Defense Ministry was developing its own future combat system.

In December 2011, first deputy chairman of the defense complex of the Russian Federation government, Yuri Borisov, said that the Russian future combat system would appear during the next three years.

This year, however, the Defense Ministry has refused from purchasing protective gear. The state defense order only includes 3,000 body armor sets and 1,000 armored suits. The bulletproof vests are too heavy, defense officials claimed. Prior to that, the ministry would normally buy 45,000 vests every year.

It is obvious that the current developments of domestic producers do not satisfy the Ministry of Defense completely. Otherwise, the new combat systems would have been created and presented.

It also seems surprising that the Russian defense officials decided to take a look at the Italian equipment: it is far from being the best. The French FELIN or the German IdZ are far more advanced, experts say.