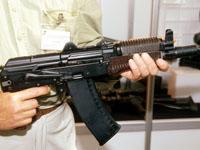 Russia's largest firearms manufacturer, JSC Izhmash, unveiled its first model of the fifth-generation Kalashnikov assault rifle. The new rifle is tentatively called AK-12. The assembly of the new weapon, the development of which was initiated by Izhmash's chief designer Vladimir Zlobin, was completed in 2011. Specialists currently test the new weapon, the press service of the enterprise said Wednesday.

Russia's Interior Ministry has already requested the AK-12 for test exploitation. Izhmash is ready to arrange the deliveries of the new weapon for the Russian army too, Interfax reports.

Russian news agencies reported Wednesday that the Defense Ministry of Russia was not planning any purchases from Izhmash within the scope of the state defense order for 2012. It was also reported that the messages about the creation of the new Kalashnikov rifle were not true to fact.

"The AK-12 is being developed for export purposes. However, it also meets the requirements of the Defense Ministry, which the ministry has for the equipment of the soldiers of the Russian army. If there's an order, the enterprise will be ready to arrange the shipments of the AK-12 for the Armed Forces and special units of the Russian Federation," the press service of the company said.

The state tests of the rifle may begin at the end of 2012 or in the beginning of 2013. "Developing the new family of automatic rifles is a priority for the development of the enterprise. The company intends to retrieve its international market share," officials said.

For the time being, the company tests the AK-12 at its own base. The construction and ergonomics of the rifle will be changed as a result of the tests. "We will have to conduct many consultations with competent specialists who are interested in the creation of state-of-the-art, effective and reliable Russian assault rifle," Vladimir Zlobin, the designer of the rifle said.

Vice Prime Minister Dmitry Rogozin was the first Russian official to have seen the AK-12. Designers managed to improve the parameters of the rifle. They adapted the weapon to modern combat conditions, having preserved Kalashnikov's unique qualities: simplicity, reliability and relatively low production cost.

The AK-12 has classic configuration, which creates a constructively simple automatic rifle with an option to mount powerful muzzles and large magazines. The new rifle is created as a basic platform, which will then be used for the development of nearly 20 different modifications of civil and military firearms. The caliber of cartridges used for the new rifle may vary from 5,45х39 to 7,62х51 mm.

Designers enhanced the ergonomics of the new rifle. The controls of the weapon (the lock, the selector of the kind of fire, the clip latch, the bolt latch) became available for one hand, which a person holds the weapon with.

The Picatinny rails were integrated in the construction of the AK-12. The rails are used to mount additional equipment: optical, collimating and night sights, mexometer, grenade launchers, lights, target indicators and other equipment. The devices allow to use the weapon effectively during any time of the day.

The new rifle also has the folding stock, and the height-adjustable heelpiece. The operating rod handle of the AK-12 can be mounted either on the left or on the right, which makes the weapon comfortable for both left-handed and right-handed people.

The list of novelties includes three fire modes: single shots, three shots and automatic fire. The muzzle of the assault rifle has been amended to shoot foreign-made barrelled grenades. Specialists currently design new magazine cases for the AK-12 - for 95 cartridges.

To increase the efficiency of single fire, the AK-12 was equipped with a new mechanic sight with enhanced sightline. The changes also touched upon the firing mechanism and the construction of the gun group. The AK-12 also uses state-of-the-art technologies in the field of coatings and materials. Over ten technological solutions will be introduced and patented when building various models of the assault rifle.