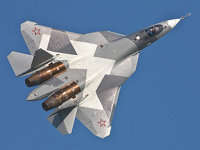 Russia's Sukhoi PAKFA T-50 fifth-generation fighter jet did not struggle with Western rivals for South Korea's lucrative tender of $7.3 billion. First off, Russia is not willing to share its secret technologies with US allies. Secondly, Russia does not hope for victory. To crown it all, the serial production of the widely advertised T-50 fighter jet has not been arranged yet, officials with the domestic aviation industry told Izvestia.

South Korea intends to purchase 60 new fighter jets within the scope of the third stage of its F-X rearmament project. The new jets will be defending the airspace of South Korea during the forthcoming 30 years.

The deal has already earned the reputation of the "contract of the century." The scale of the deal is unexampled for the country. The organization committee of the tender stopped receiving bids last week. It turned out that there would be European and US companies fighting for the Korean billions. It particularly goes about Europe's EADS Concern with its Eurofighter Typhoon, Sweden's SAAB and its Gripen and two US companies - Lockheed Martin with F-35 (Lightning II) and Boeing with F-15SE (Silent Eagle).

It was earlier reported that Russia's Sukhoi design bureau was also going to take part in the tender. The Korea Times wrote with reference to the South Korean defense agency that Russia would offer its PAKFA T-50 fifth-generation fighters.

However, it turns out that the Russian aircraft by the United Aircraft Corporation was not going to offer its products for the tender.

"The T-50 technologies are secret. Only three test versions of the fighter have been built so far. The export variant has not even been created. In addition, South Korea is a US ally. It does not seem to be likely that the country will choose the Russian jets instead of the American ones," officials told The Izvestia newspaper.

Alexander Konovalov, the director of the Institute for Strategic Analysis, is certain, though, that Russia is not ready yet to present a competitive fifth-generation fighter jet to experts.

"We only begin our work in this field. At international tenders, they set forth very high requirements to aircraft. They are supposed to be able to accept and process a great deal of information. They should have powerful computers on board. What is more, such aircraft must develop ultrasonic speed and stay invisible to radars," the specialists list.

"For example, to make their aircraft less detectable to radars, the Americans cover their fighter jets with small copper rings. We do not have anything like that," the expert said.

The T-50 became a Russian response to USA's F-22 and F-35 fifth-generation fighters. The test flights of the US aircraft are to be completed in 2012. Afterwards, in 2013, Russia will launch the tests of new missiles of the new jets.

Igor Korotchenko, the director of the Center for the Analysis of World Arms Trade, believes that Russia's T-50 project does not need the financial support from South Korea.

"Russia is expecting a large contract with India. India has already contracted 250 T-50 fighters. Therefore, the technical loss of those hypothetical $7.3 billon is not critical for the Russian project. We've already participated in South Korean tender before. As experience showed, the country prefers to purchase from the Americans," the expert stated.

Indeed, it appears that South Korea has already chosen its customer - the USA that is. South Korean MBN TV channel reported that Seoul had paid $1 million for the documentation on one of the competing airplanes - F-35. The payment was made prior to the tender. This information may mean that the political decision to purchase the fighter jets from the United States has already been made. Defense experts realize, though, that Eurofighter Typhoon could also be a serious competition.

Russia took part in the tender for the fighter jet for the Air Force of South Korea in 2002. Russia's Su-35 lost the tender to F-15 of the USA. It is worthy of note that Seoul has purchased military hardware from Russia before. The South Korean army has T-80 tanks and BMP-3 armored vehicles.

US, European and Russian companies previously participated in the Indian tender for the delivery of a multi-purpose fighter jet within the scope of the MMRCA program. Russia took part with its MiG-35 fighter, although it did not win the tender.