Russian elections: And the winner is...The Special One!

Vladimir Putin is The Special One of Russian politics after winning a landslide crushing victory, securing his third term as the President of the Russian Federation with a huge majority over second-placed Gennadi Zyuganov (Communist Party) in a free and fair transparent election which cocks a snook at an insolent and hostile western press. 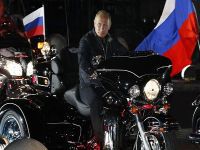 These were the words with which President Vladimir Putin greeted a massive crowd of doting supporters. The entire country celebrates what makes common sense - the right man in the right place at the right time, ensuring that Russian resources are for Russians, ensuring that Russian interests and culture and traditions are respected by the international community - and not insulted - and making sure the State of the Russian Federation is safe against intrusion by hostile foreign powers and agents provocateurs internally.

Urging all Russians to unite around the interests of Russia, President Vladimir Putin celebrated a resounding victory with over 60 per cent of the vote, way ahead of the main opposition candidate, Gennadi Zyuganov (Communists) with around 18 per cent.

For those who wish to concentrate on opposition and violations: Vladimir Putin ordered video cameras to be installed in 91,000 of Russia's 96,000 polling stations.