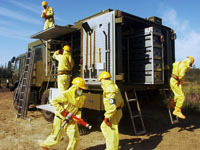 According to the U.S. ambassador in Moscow Michael McFaul, Russia is ready to discuss the reduction of its tactical nuclear arsenal with the United States. It links this issue to the concessions on missile defense systems in Europe. The experts interviewed by Pravda.ru said that in case Russia agrees, it would lose one of its last trumps allowing resistance to NATO aggression.  Obama actively forces the reduction of tactical nuclear weapons arsenal on Russia. It is interesting that Moscow has not ruled out this scenario. Speaking at a recent hearing before the Committee on Foreign Affairs of the Senate of the U.S. Congress, the new American ambassador in Moscow Michael McFaul stated that Russia warned the U.S. that it would not reduce its tactical nuclear weapons (TNW) if there is no agreement on missile defense. This means that under a certain scenario Russia would be ready to reduce its tactical nuclear weapons arsenal.

Obama, after reaching an agreement on START-3, declared "the next round of disarmament talks," which at this time will touch upon nuclear weapons of limited range.  "We have some general agreement that these talks should take place," said McFaul. However, this, according to the ambassador, should be preceded by a legally binding agreement that the US will not undermine their potential strategic deterrence.  U.S. sources indicate that despite the current inflexible U.S. position on this matter, such a deal is possible in principle. But this, again, will be preceded by negotiations. So far the Americans are striving to show the utmost importance of deploying missile defense in Europe. Tactical nuclear weapons, or non-strategic nuclear weapons, are munitions designed to destroy large, including the well-fortified, objectives and enemy forces on the front.

Unlike in case of strategic nuclear weapons, the range of tactical nuclear weapons is in the tens or hundreds of kilometers, and power charges (bombs, warheads of tactical missiles, artillery, ammunition, depth charges, and torpedoes) generally do not exceed a few kilotons. All nuclear powers except Britain are now armed with TNW. Britain refused to have them for various reasons, including geographic location. Why is the U.S. so concerned about Russian tactical nuclear weapons? Earlier, Washington has expressed concern that it was much easier for terrorists to get hold of small-sized nuclear warheads than to take out, say, intercontinental ballistic missiles.

In late December of 2010, the Assistant Secretary of State for Verification, Compliance, and Implementation Rose Gottemoeller reported that Russia had more such systems than the US, and urged the Congress to address these issues. The next step would be the reduction of tactical nuclear weapons.

The Americans are concerned because Russia has several thousand tactical nuclear weapons, while the United States has fewer than a thousand. However, Russia has its own claim to the States since part of the arsenal is still based in Europe. Moscow has insisted that Washington takes it out of there without any preconditions.

But the Americans have not yet expressed a particular desire to do so. Moreover, when the U.S. raised the issue of tactical nuclear weapons, they insisted not only on reducing the Russian arsenal, but also exporting the remaining charges to the Ural Mountains. In the event of a serious conflict Russia simply will not have time to deliver it to the theater of war. In addition, under the conditions of superiority of the serious potential enemy in the face of NATO in terms of air attacks and weakening of the Russian defense, the delivery of the Russian tactical nuclear weapons to the front line looks problematic.

Neither the reduction of tactical nuclear weapons, nor its removal from Europe has any immediate threat to the United States due to the fact that there are no Russian bases at the U.S. borders. The Russian tactical nuclear weapons even theoretically cannot be used against the United States because of their short range. The only exception would be if the Americans invade the Russian territory.

What do military analysts have to say on the issue of tactical nuclear weapons? Experts Konstantin Sivkov, Vladislav Shurygin, Alexander Khramchikhin and Dmitry Tsyganok commented on the situation for "Pravda.ru":

Konstantin Sivkov, first vice-president of the Academy of Geopolitical Issues: "Starting to discuss the possible reduction of our tactical nuclear arsenal, we get on the U.S. hook yet again. We have been deceived by the START 1 and START-2. Suffice it to recall how the U.S. cut its strategic arsenal by simply dumping detachable warheads off alert and forming the so-called "breakout potential" that could be quickly used against a potential enemy.

"Of course, some people are trying to present it in the spirit of "we could not do otherwise, as Russian strategic arsenal is outdated, and the U.S.'s is not," etc. All these are the excuses of the interested parties. Even the service life of the oldest ICBM "Satan" was quite possible to extend. In any case, given the lies of the U.S., Russian should have given an adequate answer and rejected the implementation of the agreements that weaken us, while the potential enemy actually saves the old power. But every time we make deals with those who always deceive us. The same applies to the START-3.

"Thus, we have created a dangerous imbalance in the strategic arsenals. This is compounded by recently released by the U.S. Air Force plans to modernize the nuclear weapons for use on strategic bombers. This has to do not only with extending their service life, but also a marked increase in power charges. This allows the Americans to minimize losses while reducing their existing strategic arsenal. But despite all this we begin to talk about the reduction of our tactical nuclear weapons. Why do the Americans need it? Simply, they want to deprive us of the last trump card we still have to be used in wars of non-strategic nature. Now, after the so-called military reform, our armed forces are not able to resolve conflicts on a large scale.

"The fact is that by doing so we destroyed our deployment base available in case of war that made it possible to create additional units to repel the aggression of a potential enemy. This is the liquidated units on whose basis the deployment in the event of mobilization was planned. If before the reform we could provide an army of three million people, now, taking into account existing troops - only 150-200 thousand. In fact, we can only call for those mobilized only to replenish the parts that do not have the complete set. Let me remind you that to solve local problems in Chechnya, we had to use the grouping of about 50 thousand people. In its current form, our armed forces without the use of tactical nuclear weapons can solve only limited conflicts such as the one in Chechnya.

"We are not only unable to carry out such operations using conventional forces, but also reflect NATO attacks without the use of tactical nuclear weapons. The alliance, if necessary, together with other allies, can put up three million people against us. On our part, in the best case, only 200 thousand from units of permanent combat duty would participate. In case of more global issues, we can only rely on tactical nuclear weapons. If we go into an agreement with the Americans, we would lose our probably only remaining trump card. Relying on the already weakened strategic arsenal in this case is not worth it. Moreover, in a conventional war when the enemy does not use the ICBM we would not be able to use it. You cannot say it about tactical nuclear weapons.

"Our military doctrine has a provision for a possible use of the TNW without having to get an approval from the top. For example, in case when the situation at the front is exceptionally hard and there is no connection with the upper structures."

Dmitry Tsyganok, director of the Center for Military Forecasting:

"The current situation is more than strange. We agree to the Americans START-3, which has a number of misunderstandings. And in particular, in fact, we have not agreed on an issue about missile defense. Nevertheless, we signed it and agreed to reduce our strategic nuclear arsenal. And now, the implementation of Russia's requirements for the START-3 is dependent upon the reduction of no longer strategic, but the tactical nuclear arsenal as well.

"As for the EUROPRO issue, then raising it, the Americans are trying to kill two birds with one stone: to blackmail Russia and to maintain its influence in Europe in order to prolong the life of NATO, which in recent years has increasingly demonstrated its inability to deal with challenges.

"NATO troops have not fulfilled all tasks in Iraq, and there is still a large group of American troops there. Even bigger failures of this alliance with the US bias are obvious in Afghanistan and Libya. In the first case, NATO is increasingly losing control over the situation in the country, while in the second instance it shows the inability to destroy an army parade of Gadhafi in the time allotted despite its superiority in all respects. Lately the leading European countries have been increasingly demonstrating their unwillingness to listen to the voice from across the ocean. Suffice it to mention the fact that countries like Germany and France are openly hatching the idea of ​​creating a European army with no American influence. So we do not need to play along with the Americans on missile defense."

"I do not see how Russia can haggle over the decline of its tactical nuclear arsenal, tying it to the issue of missile defense in Europe. You just have to know a little physics to understand the following: nothing serious threatens Russia. I would have understood the reasons for the concern had the Americans suddenly began to develop a continental missile defense system on their own territory. In the case of placement of its components in the European countries nothing bad will happen. So there is nothing to bargain about, and for this reason, Russia should not discuss with the United States the issue of reducing its tactical nuclear arsenal. This can be done only as it becomes obsolete, but not because of someone else's concern."

"For the Americans, it would be very beneficial. Reduction of our tactical nuclear arsenal is their old dream. And unfortunately, apparently, our leadership will satisfy them on this occasion. To achieve the realization of this objective, the U.S. put forward a purely hypothetical missile defense project in Europe. Moreover, we do not know whether it will be embodied in general and how it will be effective from a purely technical point of view. But in any case it is difficult to imagine that the so far non-existent European missile defense system could give a hundred percent guarantee of protection to a still serious Russian arsenal of tactical nuclear weapons with thousands of warheads. We are ready to destroy our very real tactical nuclear arsenal to the Americans remove this virtual project."