Medvedev: Why compete with Putin? 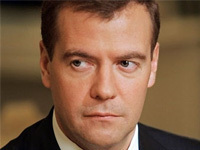 Russian President Dmitry Medvedev gave an interview to central TV channels. In the interview, Medvedev explained why he decided not to run for a second term.

As we have already reported before, the main political intrigue connected with the forthcoming presidential election in Russia was unveiled at the Congress of United Russia Party. Medvedev refused to run for the second term and yielded the right for it to Prime Minister Vladimir Putin. This decision came a surprise for many.

"You have a high trust rating, you are a young and active politician with a good reputation. What is the main motive for this decision? Usually, a person, who takes the position of the president, uses the opportunity to run for a second term. You deal with politics, and politicians are ambitious people. What is your ambition in this decision?" Konstantin Ernst, the director of First Channel asked the president.

"You know, the main ambition for me is to bring good to my country and to my people," Medvedev responded. Me and Mr. Putin - we represent one and the same political force - United Russia. We also and share close positions on the majority of tactic and strategic issues regarding the development of the country. Therefore, it would be absolutely pointless to arrange a competition with each other," Medvedev said.

It could be possible to solve the question by means of primaries, but it would have become the subject of discussion between the leaders, which, by the way, does not go against international practice.

"Let's just imagine this situation: Barack Obama and Hillary Clinton enter competition with each other. They both were presidential candidates in the past. It is impossible to imagine that now. They both come from the Democratic Party. When they were making their decisions, they thought about who could bring best results. This is the decision that we made too," Medvedev said.

The president also said that the rating of the prime minister was higher. Putin still remains the most respectable politician in Russia, Medvedev said.

"These are practical, but very important things, which any politician has to take account of, if they want to bring good to their country. We shouldn't elbow each other," Medvedev said.

The decision, which was announced during the Congress of United Russia, was not something that had been prepared at home. The decision was made on the base of the current political situation.

"Yes, we had ideas long ago about how we could build power in the country if people continued to trust in us in 2011 and 2012. This is true, and we said that during the congress. However, life could introduce special and paradoxical corrections. What if people changed their election preferences for some reason? I must take account of that. Me and Vladimir Putin, we take two top positions of the president and the prime minister, and we simply must support each other because we are common people," Medvedev said.

However, none of that can serve as a basis for the talks about some sort of predeterminacy or the imitation of elections.

"You know, if we, for example, imagine for a minute that we have agreed with Gennady Zyuganov, Vladimir Zhirinovsky, Sergei Mironov and other respectable comrades that they don't participate in the election. They don't run, but we, the greatest, stay. That would be the imitation. But they are going to take part in the election in December and then in March. It's up for people to decide whom they are going to vote for. It's only the people, our citizens who can dot all i's as they cast their votes for this or that candidate or political force. This is democracy," the head of state said.

In general, Medvedev believes that the power must be renovated because "stagnation is always dangerous and always leads to negative consequences. "The power must find strength to renovate itself, although it can't happen impulsively. It can't be bouncing, when everyone steps down, says goodbye, and me and Vladimir Putin also say: "Goodbye, we are leaving." We have to have succession. We have to have the situation when we realize who is going to stay at power. But we also need a renovation, a very serious renovation. I was trying to make this renovation permanent," Medvedev said.

The president reminded that a half of Russian governors had been replaced during the recent three years. "So if Russian citizens trust United Russia, if they vote for the party, if they vote for our presidential candidate, if I become in charge of the new government then it will be a completely renovated government," Medvedev said.

At the end of the interview, Dmitry Medvedev said that his family members were not very happy about the fact that he may become the prime minister.

"My family is used to many things now, but they can guess that if the things that we are talking about happen, if the elections take place like that, then they won't be seeing me more often than they do now. They are not happy about it, of course, but they help me in everything," the president said.