Putin-Medvedev tandem stronger than ever 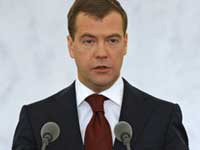 Mass media are reporting about the rift in the Putin-Medvedev tandem, disregarding the context of Medvedev's statements. However, the most important thing in big politics is details.

Dmitry Medvedev released a special statement yesterday, March 21, in connection with the situation in Libya. Medvedev expressed his views about the foreign political situation with Libya and clarified the position of the Russian Federation during the voting at the UN Security Council.

"The Russian Federation originally wanted Libya's internal affairs be regulated peacefully. We were following the situation meticulously and unanimously condemned the actions of the Libyan administration and the leader of the Libyan revolution against its own people. With this in mind, Russia supported Resolution 1970 of the UN Security Council and allowed Resolution 1973 - to protect the population and prevent the escalation of the conflict. But of course, we proceed from the fact that the approval of any resolutions by the UN Security Council must strengthen peace, cease the civil feud and prevent escalation and casualties," Medvedev said.

Dmitry Medvedev also noted that the current development of the situation in Libya falls beyond the scope of normal. "Unfortunately, a real combat action has begun. This can not be allowed, of course," he said.

The Russian president was very cautious in expressing his attitude to the Western coalition:

"I hope that all countries, which are currently participating in the operation to create the no-fly zone above Libya and which are using their military forces, realize that all of that is being done for the people of Libya, not to let Libya disintegrate as a state." At the same time, Medvedev added that civil objects were destroyed and innocent people were killed as a result of those actions.

"Everything that is happening in Libya is connected with absolutely disgusting actions conducted by the Libyan administration and with those crimes that were committed against their own people," he said.

As for the recent remarks by the Libyan leader, who described the actions of the Western coalition as another crusade, Medvedev said:

"It is inadmissible to use expressions such as 'crusade' and so on which in their essence lead to the clash of civilizations. It's unacceptable. Otherwise, it may all finish much worse than it is happening today," he said.

It is important to understand how differently the notion of crusade can be taken in modern-day Europe and in Islamic Asia. For us, it is nothing more than an idiom that appeals to ancient history. For the Islamic world, it means a holy war. Orientalist Yevgeny Satanovsky spoke about it in a recent interview. "The epoch that is now reigning in the Middle East corresponds to the times of Crusades from the point of view of the history of religions," the scientist said.

"There is a dangerous trend to turn the clashes in North Africa and in the Middle East into the conflict between Christians and Muslims. Libyan leader Gaddafi called the military operation of the West in Libya "a new crusade, unprecedented in its treachery," a high-ranking church official stated.

Dmitry Medvedev stressed out in his speech that one should not turn the civil war in Libya into an inter-religious conflict. This is the message that his statement was based on. The phrase "it is inadmissible to use expressions ... which lead to the clash of civilizations," mirrors the position of the Russian Orthodox Church and proves the above-mentioned point.

However, this is exactly the place where the world media found contradictions in the tandem of Dmitry Medvedev and Vladimir Putin. During his visit to a Russian missile factory Putin called the UN Security Council's resolution on Libya "deficient and flawed." "It allows everything and is reminiscent of a medieval call for a crusade," he particularly said. "It effectively allows intervention in a sovereign state," he also added.

As a result, numerous publications all over the world reported that Putin and Medvedev were in a rare public clash over Libya. Pro-Kremlin website Gazeta.ru, for instance, published a news story titled "Medvedev condemns Putin for using word 'crusade' about Libya." Afterwards, the publication strengthened the effect as it published an article with the following subtitle: "Vladimir Putin fears the fate of Arab rulers."

There is a certain media pool in Russia, which has been working for the break up of the tandem since 2008. The subject was picked up and distributed in the media very quickly.

The full transcript of the president's speech was posted on his official website less than an hour after first news stories on the subject began to appear in Russia. However, it did not help to change the situation.

Alexander Voloshin, the former head of the presidential administration tweeted: "Speaking about crusades (sorry), the president criticized Gaddafi, who called those actions so. Putin only quoted Gaddafi. The scandal was arranged from nothing by slow-witted journalists. The media always need something sensationalist. I am not a conspiracy theorist. The subject of the two leaders breaking apart is extremely attractive to reporters, so one has to be very accurate about it," he said.