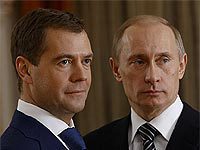 If United Russia Party wins the parliamentary elections, and if opposition parties do not nominate a worthy candidate, then the country will have a new government and the new president during the upcoming six years.

The intrigue with the presidential election in Russia has been unveiled. The scenarios of election campaigns in Russia - both the parliamentary and the presidential one - became a surprise to a certain extent. The surprise came for other political parties: it will be very hard for them to compete with the tandem.

It is official. Prime Minister Vladimir Putin will run for elections in 2012. The news was announced on September 24th, during the congress of United Russia Party in Moscow.

Putin said that he and Dmitry Medvedev had discussed the plans of their political future a long time ago. Putin also suggested Medvedev should head United Russia's list at the parliamentary vote.

"Given the offer to head the party list and engage in party work, and given a successful run at the elections... I believe that it would be appropriate if the congress approved Vladimir Putin's candidacy for the post of the president of Russia," Medvedev said to a prolonged standing ovation at Moscow's gigantic Luzhniki sports complex.

"This applause spares me the need to explain what experience and authority Vladimir Vladimirovich Putin possesses," he told thousands of flag-waving delegates, RIA Novosti reports.

"I have often been asked: when are you going to make up your mind?... Vladimir Vladimirovich and I have sometimes been asked: have you fallen out with each other? What we propose to the congress is a deeply thought-out decision," Medvedev said. "We were actually discussing this course of action as early as when our union was being formed," Medvedev said.

Putin said he had "no doubts" Medvedev would form a "new, effective, young and energetic" cabinet when he heads Russia's government and "continue his work on modernizing all aspects of our lives."

Scientist of politics Konstantin Simonov said that the party congress solved all intrigues at once. "The current political construction is clear now. Vladimir Putin is coming back as the president, whereas Dmitry Medvedev runs at the top of United Russia's list. It is also obvious that Medvedev and Putin disavowed the rumors about the conflict inside the tandem," the expert told Pravda.Ru.

Representatives of political parties showed different reactions to the news. Gennady Zyuganov, the head of the Communist Party, demonstrated his indifference to the news. There could be no other solution chosen, he said.

Sergei Mitrokhin of Yabloko Party, said that the political course proposed by Putin and Medvedev was rather a way to a new setback than modernization. This way, Mitrokhin added, may have a sad ending, like it happened in the past with Leonid Brezhnev's era of setback during the times of the Soviet Union.

Vladimir Zhirinovsky, LDPR's leader, said that he was expecting such a decision.

"This is very good that their team has finally decided that. The uncertainty was making everyone nervous. Putin's experience is more extensive. May it causes more sympathy with people. He is close to the military, to the defense industry and to Soviet traditions. People think of Putin as the new Brezhnev and the new Adropov," Zhirinovsky said.

Representatives of the non-system opposition started talking about the imminent catastrophe for the country, the outflow of capital, the conservation of power, etc.

"The non-changing power is the worst scenario for Russia," Boris Nemtsov said. The man has already stayed in power before, but he still hopes to come back.

Vladimir Zhirinovsky said that the personnel of the Russian government may change considerably after Dmitry Medvedev becomes the prime minister. "All Brezhnev-type governors will have to go. Some 30 people will be dismissed at once, because they represent the remains of the Soviet power," the official said.

Putin's press secretary Dmitry Peskov stated that Putin and Medvedev are strategically united despite insignificant discrepancies that they may have.

"Some people may disagree with the strategic approaches of the tandem. Those people will leave. There will be a qualitatively new government formed. Qualitative changes will take place, but elements of the tandem will be preserved," the press secretary said.

Finance Minister Aleksei Kudrin has already said that he did not see himself in Medvedev's government because of discrepancies on a number of issues.

According to Kudrin, the discrepancies touch upon a number of economic issues, including the defense spending.

Igor Shuvalov, the First Vice Prime Minister, said that Mr. Kudrin would stay in Putin's team in case he decided to quit his work in the government. Shuvalov believes that Kudrin's 12-year work experience in the government will come in handy to strengthen the country's economy in any configuration.

Kudrin himself confirmed his intention to keep on working in the team. "I don't make decisions about the positions on which I can work. The propositions are not supposed to come from me," he said.

As for other members of the government, they are more optimistic about their future. Igor Shuvalov, for example, is ready to continue his work in the team of Vladimir Putin and Dmitry Medvedev.

"I pretty much enjoy the fact that they will continue this work, and I understand how I should work with them. Professionally, they never reject any ideas without giving a reason for that," Shuvalov said.

In case of the victory at the elections in December of this year (if United Russia's candidate wins) the new government will be formed in March. "It will be a new team with freedom of action within the scope of the Constitution," Sergei Naryshkin, the chairman of the presidential administration said.

Putin and Medvedev trust each other completely, Naryshkin believes. The future government will rely on the parliamentary majority. "One may say that it will be the government of people's majority," the official said.