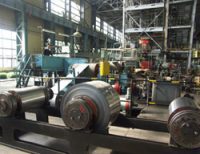 In addition to the state arms program, the Russian government will approve the program to reequip the national defense industry, Prime Minister Putin said.

"Our goal is to guarantee the complex re-equipment of the army. This program is very intense and complicated for the budget, but it can probably be a breath of fresh air for the defense industry," Putin said on March 4, before the inter-regional conference of United Russia party.

"Together with the new state arms program, we need to approve another program - to re-equip the defense industry itself. It is possible to make state-of-the-art arms only on state-of-the-art equipment," the head of the government said.

Pravda.Ru has already reported before that Russia was planning to spend up to 20 trillion rubles within the scope of the state arms program before 2020. The share of state-of-the-art arms in the Russian army is expected to grow up to 30 percent by 2015 and by 70 percent - by 2020.

Putin urged developers and producers to mobilize their efforts and build their work effectively. He also stated that the terms indicated in the new program must be observed strictly.

"There should be toughest control here," he stressed out. According to Putin, the implementation of all future plans will depend on the realization of the current goal. It is extremely important, he added, the funds should be transferred to the enterprises that can execute the current goals already.

In the meantime, there are serious problems about the shipments of new equipment. According to the Audit Chamber of Russia, the state defense order for 2009 was executed on the level of 50 percent only.

"The analysis of the execution of state defense orders showed that the order of the Defense Ministry in 2009 was executed on the level of 41.9 percent," a report from the Audit Chamber said.

As for 2010, the situation became even worse. According to Nezavisimaya Gazeta, the state defense order in 2010 was executed on the level of 30 percent.

It is quite possible that the state defense order is not going to be executed this year either. However, the defense ministry already plans to purchase several types of military hardware from abroad. Russia plans to purchase lightweight armor from Germany, armored vehicles from Italy and Mistral helicopters from France.

It goes without saying that enterprises of the Russian military and industrial complex are unable to produce everything on the weapons list. There is nothing shameful in the intention to purchase military hardware from other countries, especially if there are plans to establish licensed production.

It does not remove a very serious problem, though - the condition of the national military and industrial complex. According to experts' estimates, the machinery of the complex is as much as 100 percent outdated. The average age of employees at enterprises and think tanks of the defense complex is 50 and 60 years respectively.

As a matter of fact, there is no other way out. The program to re-equip enterprises of the military and industrial complex will have to be conducted simultaneously with the arms program for 2011-2012. Any delays are out of the question.