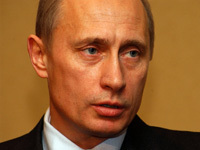 It is understandable that the West is made uneasy by Russia because of the communists that were in charge of the government under the Soviet Union. There is a small communist party that still exists today but Putin is not a member and they are all vocal against him to a point of creating riots in Moscow with people sent in from Vladivostok (January 2009).

It clearly shows the conflict between the Communists and Putin's United Russia Party. Last March 28, Reuters wrote something similar in Arkhangelsk.

Putin recently advised the West concerning democracy: "Rather than talking about democracy in Russia let the West be specific about the issues that matter. If they are worried about nuclear programs in Iran, let's talk about Iran together. If they want us to resolve Kosovo, let's talk Kosovo. We will gladly participate in any debate with our partners."

He also stated in an interview with Larry King on CNN that he would set up a defense if the west were to set up missiles near Russia. He emphasized that he would never start anything but only retaliate. Putin's reply at 2:20
Better translation here.

"Larry, listen, I'd like to make this clear to you and to all Americans, or,
at least, to the audience of your show today. It's not Russia that is moving
missiles close to your border; it's the United States that is planning to
deploy missiles near Russia's border. We keep hearing that the purpose is to
protect yourselves from the threat of a nuclear missile attack by Iran, for
example. But Iran poses no such threat at the moment. And if anti-missile
and radar systems are set up near our border, even in 2015, they will
undermine our nuclear capabilities. So it's only natural that we are alarmed
by the prospect. And we are obligated to take some measures in response.
This is a response; we are not making the first moves... But we continue to be
told: "We don't want to take your interests into account, we are going to do
whatever we want." So we'll just have to view it as a threat to our
security, and we'll be forced to respond accordingly. That's what I'd like
to get across to the American public."

Putin sees no threat working with Iran. The spent fuel from the nuclear reactor is being sent back to Russia as promised. The western media rarely includes the fact that the UN nuclear inspectors from the International Atomic Energy Agency (IAEA) are keeping a watchful eye on the nuclear power plant in Bushehr. Only one TV station in America finally reported it correctly.

Fox News reported last August 2010, "The uranium fuel Russia has supplied for Bushehr is well below the more than 90 percent enrichment needed for a nuclear warhead. Iran is already producing its own uranium enriched to the Bushehr level -- about 3.5 percent. It also has started a pilot program of enriching uranium to 20 percent, which officials say is needed for a medical research reactor."

In my article, "The World Should Follow Russia's Lead", I wrote, "According to the Moscow Times Iran tested its first nuclear plant February 26, 2009 with the help of Russian officials. Russia is working with Iran and not against it. Russia no more wants Iran to have nuclear missiles any more than the US does. Recently, President Dmitry Medvedev on September 22. 2010, signed a ban to stop deliveries of S-300 missile systems to Iran."

"President Dmitry Medvedev ...signed a decree which bans deliveries of S-300 missile systems to Iran.", reported Russia Today. Medvedev will not allow Iran to have the missiles they requested. I remember this happened after a meeting he had with Netanyahu of Israel. The first meeting was in February then I heard they had another meeting later in secret. "Russia certainly understands there is a need to prevent Iran from acquiring nuclear weapons and it understands that certain steps must be taken against it," Netanyahu said.

As though to persuade the reader that Russia could care less, Reuters likes to add, "Neither Medvedev nor Prime Minister Vladimir Putin has publicly commented on the Iranian situation for weeks." Maybe instead of relying on babylon.com or Google to translate the web, Reuters should invest in a human translator. "A web translator is only good for translating "words" not phrases or paragraphs."

"I trust what I heard from President Medvedev on this issue. I know that on this issue Russia is guided by considerations of regional stability," Netanyahu said.

CBS and AP reported last December 1st that Putin warned, ‘resistance to the treaty "dumb,"'. However, Putin never said that it was dumb. They seem to portray Putin as a man ready to attack. They like to scare America by saying, "Mr. Putin warned". Keep in mind that dictators never warned their opponents. Did Hitler warn Russia? Did Japan warn America? Bush warned Iraq but he is not a dictator as Soros and the liberals want us to think. They later referred to Larry King's question about the Start treaty. It is the first question in our video.

The new treaty shows Russia is willing to trust America but should they really trust Obama after what happened in Georgia and S. Ossetia? Medvedev seems content with the new Start treaty that the U.S. Senate and lower house of the Russian parliament recently ratified. Russian military expert Konstantin Sivkov says it is more beneficial to America and leaves a poor missile shield for Russia.

Vladimir Zhirinovsky, the leader of the Liberal democratic party and the the Communist Party also agree that the Start treaty is bad for Russia. The upper house of the Duma still has to debate during the second reading in mid-January of 2011.

McCain, AP, CBS and others like them would be happy to tell you that Putin's father was a devoted communist. They do not want you to know that his mother was a devout Christian and had Putin baptized in 1952. In Richard Sakwa's book, "Putin: Russia's Choice", he writes:

"Maria was a devoted believer, and although there were no icons in the flat she regularly slipped off to church, which in those days of official atheism and persecution suggested a person with deep-felt beliefs. She ensured that the baby Vladimir was christened into the Orthodox faith, although this was done in secret, and she regularly took him to services"

Later, Putin recounts that on the eve of an official visit to Israel his mother gave him his baptismal cross to have it blessed: ‘I did as she said and then put the cross around my neck. I have never have taken it off since'". At 5:25 CNN Larry King asks him about his faith. (English translation below)

KING: There is much talk about Vladimir Putin and religious faith. I'm told that you wear a cross. Is that true? Are you religious? What are your feelings in this area?

PUTIN (through translator): I prefer -- I would prefer not to develop on that subject in detail. I think such things are sacred for everybody. Everybody's belief is not to be shown off, it's inside a man's heart. As regards to wearing cross, earlier I never had it -- once my mother gave it to me and when I visited Israel. I was there two times. First on an official invitation of the minister of foreign affairs of that country. The second time, I liked the country, and I traveled there with my family as a tourist.

So my mother gave it to me to have a blessing there at the Tomb of Lord. I did so and now it's with me always.

Incidentally enough, there was a story about this cross and since then I have always decided to have it on my body, now in the Dacha close to St. Petersburg, there was fire on the Dacha, it happened because of the fact that something went wrong with sauna.

Prior entering sauna, I took off the cross before entering the sauna, and then with my friend we jumped out naked, since it was so unexpected. And I cherish that cross very much, it was my mother's cross, and the fire was really in earnest at the time. So I was thinking about whether perhaps it could get even remnants of it, it was an aluminum-made cross, a very simple thing.

I was surprised completely when one of the workers, just muddling through those ashes of the remnants, found that cross intact. And the house fell, that was a surprise, a revelation, and therefore I always now keep it with me.

The only English versions are the transcripts of the full interview, which is here.

Putin will only allow traditional marriages in Russia. He said, "As for same-sex marriages, they do not produce offspring, as you know. So we are fairly tolerant toward sexual minorities, however we think that the state should promote reproduction, support mothers and children, and look after their health."

The better translation of Putin's interview with Larry King this December 2010 is here.

Putin does not drink and wants Russia to follow moderation. Reuters reported Jan. 14. 2010, "Prime Minister Vladimir Putin, alarmed by Russians' love affair with alcohol, gave the go-ahead on Thursday for a campaign to cut consumption by more than half in the next 10 years."