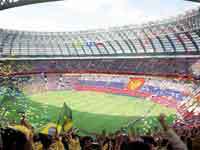 The scandal connected with the choice of the hosting states for World Football Championship in 2018 and 2022 is gathering pace. As it turns out, the right to host the major football event is based on money.

The controversy started on the pages of Britain's Sunday Times, which wrote on October 17 that FIFA officials Amos Adamu of Nigeria and Reynald Temarii of French Polynesia (Tahiti) solicited money for World Cup votes.

Journalists, who appeared as American businessmen to the two FIFA officials, said that Adamu was asking for 500,000 British pounds for his vote. Temarii was more precautious: he was videotaped talking about the construction of a $2.42 million academy in Auckland.

Blatter wrote an open letter to his colleagues on FIFA's executive committee, saying that the Sunday Times' allegation is a "very unpleasant situation" for world soccer's governing body.

"The information in the article has created a very negative impact on FIFA and on the bidding process for the 2018 and 2022 World Cups," The AP quoted him as saying.

FIFA was going to announce the hosting state for the World Cup in 2018 and 2022 on December 2. Russia is bidding for hosting the championship in 2018. Sergey Fursenko, the president of the Russian Football Alliance and the brother of Russia's Minister for Education, stated in the beginning of the year: "We have only one goal - Russia as a World Cup champion. I am certain that we will be able to accomplish this in 2018. This is not just plain talking - you will recollect my words in eight years. Russia has a chance to host the championship, and it will give a powerful incentive to Russia's development," the official said.

The scandal at FIFA has brought up the issue of unhealthy competition during the choice of the hosting state for the Olympic Games. Gennady Shvets, the former press secretary of the Russian Olympic Committee, said in an interview with Pravda.Ru that choosing the hosting states and cities for Olympic Games, World Cups and other major sports events is always a secret behind seven seals.

"It has always been a great secret. Athens has been bidding for the Olympics since 1996, when the Olympic Games were celebrating the 100th anniversary. Greece wanted the Games to be hosted in Athens, but it was Atlanta that won the bid. Atlanta headquarters Coca-Cola and CNN. Afterwards, the International Olympic Committee conducted a large-scale investigation inside the Committee to find out the reasons that made Atlanta the hosting city of the 1996 Games. The names of several IOC officials suspected of bribery were exposed, some of them had to resign.

"Afterwards, Athens won the bid to host the Games in 2004, but the victory led to considerable losses for the city. The city had to spend millions of euros for building sports facilities, but it just so happened that the money had been wasted. The arenas and stadiums were half empty. As a result, the Games triggered a financial catastrophe for the whole country. Olympic Games and other major sports events can be either profitable or unprofitable. If a city or a country wins the bid to host a world championship, it does not mean that they will become fabulously wealthy.

"As for FIFA, I do not know exactly how the voting takes place there, but it is a closed voting, as a rule, and it is not clear who votes for whom there. It is impossible to achieve justice at this point because the voters can promise anything to each other. Money is not the most important factor here. There can be companionship commitment, political considerations or just sympathies. A sports official may vote for Russia just because he or she likes the song Kalinka - such things can also be possible, but this is just an example, a supposition."

"As for Russia, many say that they want Russia to lose the World Cup bid because it is a very cost-intensive event. As long as the country has many economic problems, such concerns are easy to understand."