Russia’s State Duma is going to pass the law about the struggle against the rehabilitation on Nazism, Nazi criminals and their associates in former republics of the Soviet Union. Russian and foreign nationals may expect a prison term from three to five years in this case if they are found guilty of supporting and propagandizing Nazism. 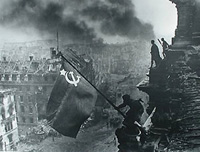 The initiative to introduce criminal responsibility for denying the role of the USSR in the defeat of Nazism was originally voiced by the head of Russia ’s EMERCOM, Sergei Shoigu in 2009. The bill, prepared by Russia’s ruling United Russia party, will be submitted to the parliament before Victory Day, May 9, The Nezavisimaya Gazeta wrote.

Therefore, the actions of foreign governments (the Baltic States and Ukraine) that either support or justify the actions of SS veterans will fall under the influence of the Russian Penal Code. Those countries particularly defame the actions of the Soviet Army during WWII.

Sergei Shoigu said that such a law would help Russia protect “our history and the deeds of our fathers and grandfathers.”

"The presidents of several countries who deny that would not be able to come to our country unpunished, and the mayors of several towns would think twice before they decide to dismantle monuments [to Soviet soldiers]" reasoned Shoigu.

Russia’s Prosecutor General Yuri Chaika supported Shoigu in his initiative. Denying the USSR’s victory over Nazism is at least a breach of morality, Chaika said. He did not exclude a criminal responsibility for such views if they were expressed under certain circumstances.

“The victory in the Great Patriotic War is a great achievement of our whole nation. The USSR sacrificed millions of lives to achieve that victory,” the prosecutor general said.

If the law is approved, a special committee would be set up to track down adequate violations. The decisions of the committee would be considered as acts of recommendation, although state agencies would be obliged to give them a consideration. A foreigner, whom the committee finds involved in the rehabilitation of Nazism, will not be allowed to enter the Russian Federation. If such a foreign national arrives in the country, he or she will have to go on trial. The same measures would be applied against Russian citizens rehabilitating Nazism.

The authorities of the former republics of the USSR that revise the results of WWII would be punished diplomatically. A diplomatic punishment would stipulate the deportation of ambassadors and the complete termination of diplomatic relations.