Russia can never surrender its nukes 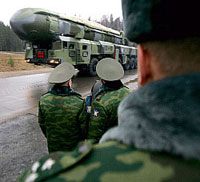 Russia can never surrender its nukes

This past week, following the G20 conference and with a North Korean missile launch as a back ground, the American president Obama made an impassioned plea for the world to be free of nuclear weapons. In his words, America must lead the way: “As a nuclear power – as the only nuclear power to have used a nuclear weapon – the United States has a moral responsibility to act". He planned on doing this through a series of measures such as the Comprehensive Test Ban Treaty and the Nuclear Non-Proliferation Treaty. He also proposed gathering up all vulnerable nuclear material, “loose nukes”, within four years.

Now the soft hearted and possibly soft brained in the Duma and in Russian political bodies may see this as a great movement and goal and will no doubt state as much and even seek funding from the US and NATO to help them make this a reality in Russia, itself. To this, I must say stop!

While the idea of a nuclear free world may seem great and sweat and adorable, it is not quite what it seems. To tell the truth, as it stands, Russian nuclear weapons are the only thing that is keeping the country from at best a Western sponsored civil war and at worst, another Patriotic War, this time against the whole of Europe and America.

Though the Anglo-Marxist sphere is dieing, it is a slow death and one that will still have many violent convulsions. As long as American arms are in Europe and Korea and Japan and Georgia, right outside of Russia's borders and are backed up by NATO as a whole, both militarily and economically, we must look rationally and realistically and historically upon what the Americans are proposing.

This, move to disarmament, is nothing new for the Americans. It is not, however, a humanitarian move but a devious ploy that they have used many times on enemies to destroy them. Early on, in America's short history, when the Americans could not conquer one Indian nation or set of tribes or states or another, they would call them to negotiate and would work to find a treaty of friendship and disarmament. In the mean time, not unlike the Islamics and their Hutnas, they would take this time to quickly move soldiers and build forts in the area. They often used plagues by giving other near by tribes infected blankets and other such niceties, to eventually reduce their enemy's strength and then instantly forgot their treaties and attacked. DC signed over 200 treaties with the various nations and tribes of North American Indians and they broke every single one.

After World War One, the US came to rival its former allies for dominance of the world, while pouring hundreds of millions to Lenin and his cronies to keep the Russian civil war going and while Germany shuddered under repayment. Thus the American's biggest rivals in the world were the British, French and Japanese and in comparison to their navies and thus projections of power, the Americans were second rate. Thus came the American crusade to fix that problem.

The goal was sweet enough in concept. The Americans appealed to the three former allies to disarm their navies, along with the Americans, limiting the scope and size of ships and armaments. Officially, this was done to help relieve tensions in Asia between the British and the Japanese, helping them to disarm. Thus by 1921, these powers were seated in Washington and without truly thinking things through, were agreeing to loose their empires and all the Americans to take everything. But Japan and Britain were not the only fools: France, Italy, Belgium, China, Netherlands and Portugal were also signatories.

The Five-Power treaty called for each of the countries involved to maintain a set ratio of warship tonnage which allowed the United States and Britain 500,000 tons, Japan 300,000 tons and France and Italy each 175,000 tons. Several things came out of this: one, the tonnage was measured so that the British could no longer maintain the full strength needed to control their empire. Furthermore, by this point, England was no longer the dominant industrial power and with both Germany and Russia out of the question and the Austro-Hungarians split into a dozen smaller states, America had the biggest industrial capacity.

Thus in one fell move, for a warm hearted and soft brained idea, the Americans were in a position where they could easily catch and strangle the empires of their competitors and take it all for themselves, as they were no longer having to play catch up to the British fleets, while being on parity with that of the Japanese and French and Belgians. They were now parallel with England and able to scale up much faster then anyone else.

Furthermore, this agreement called on signatories to stop building capital ships and reduce the size of their navies by scrapping older ships. Those older ships and capital ships were the very power center of the British navy and here it was negotiated away.

Nothing has changed and the Americans are still at their old game, knowing full well that the soft brained emotionalists in the world, who want peace at any cost, will always buy into their schemes, rather then make the hard sacrifices needed for national defense and thus freedom. Remember this: in it's short history from 1776, the Americans have invaded, annexed or just attacked well over 40 nations (to include the various recognize American Indian nations) and with this number is even greater if one considers the number of revolutions and civil wars they have personally sponsored.