Alexander Lukashenko, the President of Belarus, arrived in Moscow again. He has become a frequent guest in Moscow recently. The West has changed its attitude to Mr. Lukashenko – he is no longer referred to as “Europe’s last dictator.” 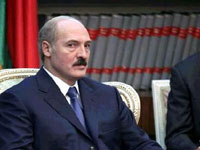 Lukashenko and Medvedev discussed a number of important issues during their meeting in Moscow. The list of questions included the expansion of the economic cooperation, the implementation of the joint anti-crisis plan, the financial cooperation, the cooperation in the energy field and the development of peaceful nuclear programs.

The relations between the European Union and Belarus unexpectedly improved in August 2008, after the war between Georgia and South Ossetia. Western leaders began to court Lukashenko because they did not want him to recognize South Ossetia’s and Abkhazia’s independence. Apparently, the West tries to disrupt the further integration of the Russian Federation and Belarus. The integration between the two brotherly nations may result in the deployment of Russian deterrent forces.

That is why the USA and the EU decided not to topple the Belarussian leader for the time being.

In addition to anti-crisis measures, the two presidents discussed the question about Russia’s loan to Belarus in the amount of 100 billion rubles, The Kommersant newspaper said. The results of the three-hour discussion were not positive for Mr. Lukashenko: Russia will not give the multi-billion loan to Belarus. Russia previously agreed to give a two-billion-dollar loan to Belarus, and the latter had already received $1.5 billion of the amount.

“The money, which Belarus hoped for, will be used to pay pensions and other social allowances in Russia,” an official from the Kremlin administration said.

Russia believes that Belarus must first substantiate the reasons for receiving such a large loan, not to mention the fact that Russia must be certain that the country will be able to pay the loan back.

It is worthy of note that the Parliament of Belarus will gather for a meeting on April 2nd to discuss the issue about the recognition of independence of South Ossetia and Abkhazia. A source from the administration of the Belarussian president said that the question could be solved positively for Russia.