Russia signed a contract with Iran to deliver air defense systems S-300 (SA-10A Grumble). Russia has not made any deliveries of such systems to Iran before, Russian defense officials said. 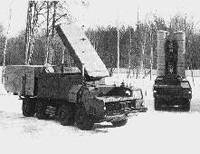 “In spite of the fact that the contract was signed two years ago there were no shipments of S-300 systems made to Iran. However, the contract is being executed step by step,” an anonymous defense official told RIA Novosti.

The deal is evaluated at hundreds of millions of dollars.

“The further execution of the contract will greatly depend on the international situation and the decision of the Russian administration,” the official added.

In 2008, Russia executed a contract to deliver eight S-300 battalions to China. The deal was evaluated at one billion dollars.

The S-300 is a series of Russian long range surface-to-air missile systems produced by the Almaz Scientific Industrial Corporation all based on the initial S-300P version. The S-300 system was developed to defend against aircraft and cruise missiles for the Soviet Air Defence Forces. Subsequent variations were developed to intercept ballistic missiles.

The S-300 system was first deployed by the USSR in 1979, designed for the air defense of large industrial and administrative facilities, military bases, and control of airspace against enemy strike aircraft.

The S-300 is also capable of destroying ballistic missile targets, and is regarded as one of the most potent anti-aircraft missile systems currently fielded. Its radars have the ability to simultaneously track up to 100 targets while engaging up to 12. S-300 deployment time is five minutes.

The S-300PT (NATO reporting name SA-10a GRUMBLE) is the original version of the S-300 system which became operational in 1978. In 1987 over 80 of these sites were active, mainly in the area around Moscow.

This system broke substantial new ground, including the use of a phased array radar and multiple engagements on the same FCS. Nevertheless, it had some limitations. It took over 1 hour to set up this semi-mobile system for firing and the hot vertical launch method employed scorched the TEL.

It was originally intended to fit the Track Via Missile guidance system onto this model. However, the TVM system had problems tracking targets below 500 m. Rather than accept the limitation, the Soviets decided that the tracking of low altitude targets was a must and decided to use a pure command-guidance system until the TVM head was ready. This allowed the minimum engagement altitude to be set at 25 m.

Improvements to the S-300P have resulted in several major subversions for both the internal and the export market. The S-300PT-1 and S-300PT-1A (SA-10b/c) are incremental upgrades of the original S300PT system. They introduce the 5V55KD missile and the cold launch method thereafter employed. Time to readiness was reduced to 30 minutes (broadly comparable to Patriot) and trajectory optimizations allowed the 5V55KD to reach a range of 75 km.