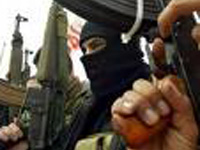 A year and a half of immoral and anti-democratic practices by the international community has created the worst nightmare for those who pursued peace in the Middle East: a Palestinian Authority geographically, ideologically and fundamentally rent in two. For those who criticised Russia for following a policy of dialogue with the democratically elected Hamas Government, and worked against it, congratulations!

The Russian Federation was the first member of the Quartet for Peace in the Middle East (European Union, Russian Federation, UNO and USA) to engage in a process of dialogue with Hamas ( Harakat al-Muqawamah al-Islamiyyah , or Islamic Resistence Movement) after it was democratically elected into government in January, 2006. In contrast, the rest of the international community, so quick to speak about democracy, instead decided to boycott Hamas, restrict aid and turn their backs on it, creating all the conditions for a crisis.

There were two causes for this crisis: the external one mentioned above, which laid the foundations for an isolation of a democratically elected government which would have two choices: obey the will of the people who elected it or implement their power through whatever means they had at their disposal. Furthermore, the boycott imposed by the international community pushed local society to breaking point, meaning that people who had belonged to a prosperous middle class were forced below the poverty line, living on 100 USD per month.

The other cause was internal: in Gaza, the faction loyal to Fatah never allowed Hamas to implement its power. Indeed, the leader of Fatah in Gaza, Mohammed Dahlan, used the security forces he controlled to block any initiatives of the new democratically elected government, including illegal imprisonment and torture of its members. Dahlan is seen in Gaza as a synonym of corruption and working for international interests, rather than Palestinian ones.

The result is a Palestinian Authority rent in two: Hamas controls the Gaza Strip (1,482,000 inhabitants) and Fatah, supported by its military wing, Al-Aqsa Martyrs Brigade, fights to control the West Bank (2,055,000 inhabitants plus 455,000 illegal Israeli occupants). In Gaza, 113 people have been killed, Hamas has effectively gained control of the organisms of power it was granted through a general election a year and a half ago, but denied through stalling tactics employed by Fatah and tens of thousands of Fatah supporters have been left without a voice.

A State of Emergency has been decreed by president Mahmoud Abbas, who replaced the democratically elected Hamas government of Prime Minister Ismail Haniyeh with an interim government led by Salam Fayyad (Doctor of Economics from the University of Texas, member of staff of the IMF and Finance Minister in various Palestinian Governments).

The Quartet reacted in the only way it could: to support the President in a statement of unity, expressing its “clear support”; Hamas called the dismissal of the Government a “coup...against all the laws”, while Prime Minister Haniyeh promised to continue working to govern the state and to “work towards the creation of a Palestinian State based on the borders in existence in 1967”.

The stalemate which has resulted has benefitted only those who were against the establishment of a definitive peace process in the Middle East and goes against all the hopes and aspirations of the Palestinian people, some of whom are pro-Hamas, others pro-Fatah, many more neither one, most in favour of peace and all in favour of getting on with their lives in a climate of normality and political stability.

With the Palestinian Authority so critically divided, an immediate conclusion may favour the hand of Israel. However, a deeper analysis would point towards a tragedy for all sides involved because without a single legitimate interlocutor, how can Israel implement a serious and definitive peace process, if indeed this is what Tel Aviv and its masters, the Jewish Lobby in the USA, ever intended?

Yet again, the unilateralism pursued by the western school of international diplomacy has failed miserably. Yet again, the approach which favoured dialogue, implemented by Moscow, was right.