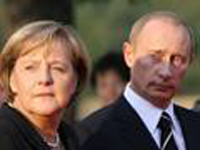 Predictably, western sources paint a negative picture of the 19th Russia-EU Summit, while President Putin underlines the positive points and sets the agenda for the future. What a difference – on one side, outdated diatribes, trying desperately to continue the notion of a “them” to justify the existence of “us” and on the other, a practical and honest approach towards improving relations.

While the western press speaks almost unanimously of the acrimonious stalemate reached during the talks, focusing on ludicrous notions such as Russia’s supposedly bad human rights record and talking ominously about deteriorating relations between the two sides, little or nothing was said about the approach or attitude of this 27-nation bloc.

For a start, and to set the mood of the Summit, the President of the EU Commission, Jose Barroso, described “democracy, freedom of the press, freedom of association, freedom of demonstration” as “sacred principles” of the EU, as if such notions were alien in Russia. He seems to be forgetting several curious incidents when he was a member of Portugal’s government. The first curious incident was when a peaceful demonstration on the 25th April Bridge was attacked by baton-wielding police and another curious incident, in Marinha Grande, where striking factory workers exercising their “freedom of demonstration” were violently broken up, some needing hospital treatment. As with his politics, Jose Barroso is again changing tune according to the flavour of the moment (he began his fighting political career as a Maoist...fighting).

So much for freedom of demonstration. As for democracy, President Putin was elected democratically, not once, but twice and if he chose to change the Constitution and stand again, he would be democratically elected for a third term. And a fourth. And a fifth. Regarding freedom of the Press, those who state that Russia’s Press is not free basically do not know what they are talking about. There are guidelines as to publishing state secrets, like anywhere else, and the Press is obliged to report the truth and not print packs of lies, like the western press does so unashamedly. Finally, the right of association depends on following the rules and laws in force in the Russian Federation and has nothing whatsoever to do with Jose Barroso or anyone else, not indeed the subversive elements queueing up trying to destabilise Russia with “NGOs”.

President Putin set the ball rolling with his statement at the start of the talks that Russia would adopt “an open and sincere dialogue without any taboo subjects”. What he received was a kick in the teeth by a gang of holier-than-thous with an inflated opinion of their importance and a superiority complex.

With virtually his first sentence, the Russian President outlined the positive side of bilateral relations, pointing out the strong commercial relationship and pointing towards an increase in the volume of trade in the near future, mentioning the “favourable business climate” and going on to underline the successful outcome of the Summit.

Indeed, where in the western press is there a single mention of the great deal that was achieved in Volzhsky Utyos? There isn’t.

The positive outcome of the Summit

For those who wish to take a more positive approach than the EU Commission’s President and apparently the EU’s media, the Summit produced a number of tangibly positive results. Not least was the simplification of the visa process between the EU and Russia, and a commitment to simplify it further in future.

Secondly, the Summit allowed for an exchange of electronic information on transporting goods, reducing delays and combating fraud. Thirdly, the Summit resulted in an increase in cross-border cooperation programmes (of which there are 15 in the European Neighbourhood and Partnership Instrument for 2007-2013).

Apart from this, President Putin highlighted the strategic nature of the relationship, there was an opportunity for Russia to stress the savage violation of human rights in two EU member states, Latvia and Estonia, there was an opportunity to discuss serious international issues with a view to approaching crises from a perspective of peace and stability, and not shock and awe tactics favoured by the USA and its European allies.

Jose Barroso’s empty words were reiterated by Germany’s Chancellor, Angela Merkel, who complained about demonstrators not being allowed near the Summit. What demonstrators? A group of marginals, who claim to be Russia’s opposition, orchestrated by an Azeri Jew named Kasparov, who happens to live in New York, were not given authorization to disrupt the Summit. And so what? The United States of America, together with several EU members, perpetrated an illegal act of slaughter in Iraq, murdering civilians, including women and children, but Barroso and Merkel are so concerned about a bunch of wannabes on the fringes of Russian society? Maybe the Russian police should have meted out the treatment that the Portuguese police meted out to peaceful demonstrators during the time Barroso was a member of Portugal’s government.

Furthermore, the President of the EU Commission went onto bring up the more delicate points in his summary speech. Instead of behaving like the diplomat he is supposed to be, he focussed on the issue of Polish meat. A suggestion for Jose Barroso: if he likes Polish meat so much, why doesn’t he eat some, and wash it down with Georgian wine and mineral water? Then he could return to his native Portugal, the world’s leading producer of corks.

And if, as he says, Estonian problems are “problems for all of Europe” what does the EU have to say about the blatant disregard for human rights in this country? Nothing. Predictably, nothing.

How to sum up the EU’s approach? In a word, bitterness. Bitterness because they encounter today a Russia which is strong, which is proud, which is defiant in standing up for its rights and its culture, in defending the propriety of is resources for their rightful owners – the Russian people. Bitterness, because the EU, like the USA and like NATO, the organisation to which so many of its members belong, are ruled by cliques of wannabe cold war warriors who perpetuate their self-importance by broadcasting remakes of the myth of Russia’s hostility.