Personality of the week: Bill Gates 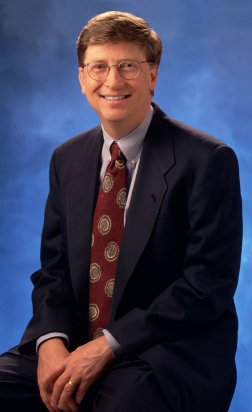 Around one and a half million children die every year from diseases which could be preventable by vaccines. For this reason a number of countries set up the Global Alliance for Vaccine and Immunization (GAVI), to which Bill gates donated his 750 million USD.

While certain governments spend 200 billion USD on slaughtering tens of thousands of civilians and a further 80 billion USD on shoring up the chaos they have created, people like Bill Gates spend their hard-earned money on humanitarian programs. GAVI, for example, is a non-profit making organization linked to the United Nations Childrens' Fund which gives grants to the 70 poorest countries of the world and to date it has saved four million lives, compared to the tens of thousands that George Bush has slaughtered with his shock and awe, freedom and democracy campaign.

William H. Gates III was born on 28th October, 1955 in Seattle and by the age of 13 was already interested in software. At 18 years of age, he entered Harvard University, where he developed the first language (BASIC) for he first microcomputer, the MITS Altair. In 1975, he set up Microsoft, convinced in the future importance of the PC.

He was right. However, the PC market followed Bill Gates, instead of the other way round. He was the one who was constantly upgrading the functional capacity but also the human interest value of software.

In 2004 he and his wife, Melinda, set up the Bill and Melinda Gates Foundation with 27 billion dollars so as to provide financial support for initiatives in the areas of health and education, hoping to make a difference in the 21st century.

Certainly this will be the case. This foundation has already provided 3.2 billion USD for global health programs and over 2 billion dollars to learning schemes.

It would be an insult to Bill Gates to compare his attitude with that of his government. For this reason, we elect Bill Gates as personality of the Week, not for being a supported of the Bush regime, nor for being a US citizen but for being what he is: a shining example of someone who has decided to use his qualities for the benefit of mankind.