There is no war on terrorism

All the stories we see in the TV news, print and Internet media today are like mice in a small room occupied by a grizzly bear. We can see the bear, hear him panting and growling as he attempts to stomp on us, but everyone pretends he's just not there, even though he's eating all the food and we mice are starving. 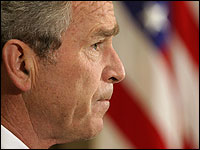 There is no war on terrorism

The bear is the U.S. government and media cover up of the 9/11 attacks. They never came close to proving that foreign "terrorists" were involved. Of all four missing planes' passenger manifests, not one Middle Easterner was on any of them. A jihadist who is bravely going to his death for the sake of his beliefs in Allah and Islam is a martyr and wants the whole world to know it. Martyr's families receive reverential praise and support in their communities for decades. Yet not one of the "terrorists" the American government insists were on the aircraft used their real names or were listed on the passenger lists. At least seven of the nineteen 'hijackers' are still alive.

The 9/11 attacks were created for justification of U.S. covert plans to grab influence over oil politics in the Middle East and as an excuse to take away the rest of Americans' liberties through a manufactured threat-scenario called, "The War On Terror."

What good are all the thousands of articles about politics, global warming, education, scandals, religion, economics and how we must always go out and vote so that we can "make a difference"? If our votes really did make a difference, they'd be illegal.

Who cares about such articles when the cover up of what really happened on 9/11 is hands-off, an untouchable leper? What good are they when in the name of a phony "terrorist attack," our way of life no longer exists except at the pleasure of corporate-driven federal socialists? We are being starved of our liberties by a ursus horribulus that stomps every mouse who dares get in his way or mention that he's there.

I see a lot of authors write all around the grizzly bear, almost approaching the truth, but none seem to have the conviction to call for an open door to run the bear out of the house. Our Founding Fathers would have made a bearskin rug.

I will tell you here and tell you now with no equivocation: THE 9/11 ATTACKS WERE NOT DONE BY TERRORISTS.

There is absolutely no need for the PATRIOT Act, the FEMA Police, Homeland Security, airline and stadium searches and warrantless monitoring of every phone call and e-mail conversation we make.

In the name of a false threat that never existed, all of our rights and freedoms have been trivialized. Every branch of federal government has been suborned, including the U.S. Supreme Court, whose judicial activists invent law and have recently canceled our rights to own property, in Kelo v. City of New London, making eminent-domain confiscations of our homes to increase politicians' tax profits 'constitutional.'

Central government today is one-hundred times worse than under George III, yet how many Americans can see this? Perhaps most don't want to see it, because it might compel them to drop their precious remote controls.

There is no war on terror

If there was, the whole nation would be told to take up arms. Everybody would be armed, even on aircraft. Inexpensive AK47's would be stored in every closet, much like arms are stored in homes all over Switzerland because the Swiss government has nothing to fear from its populace. There isonly a war against our freedomin the name of a created threat that doesn't exist. We have been duped into surrendering our liberty in the false name of security by a government that sends us out into the "War On Terror" unarmed because we cannot be trusted with guns. The most basic of all rights is the right of self defense against criminal attacks. A great equalizer between the weak and the strong, guns in the hands of women could reduce assaults upon them by stronger male attackers by 80%. How can it be said that women have equal rights if they cannot carry, yet Diane Feinstein, Barbara Boxer, Hillary Clinton and Laura Bush all hide behind guns for their protection because they're much more important than our wives, sisters and daughters? Again, the only 'war' is on our freedoms.

People are so used to being indoctrinated by government that they have actually been convinced to ignore their own eyes. Everyone who saw the videos of the World Trade Center Towers saw them fall exactly like other high-rise buildings that were dropped by sequential demolition charges, at the speed of gravity because there was no structural resistance below to impede their collapse into their basement footprints. Yet almost every viewer has been convinced by the lap-dog media that measly jet-fuel fires could melt the massive steel girders of both buildings, then make everything collapse. Just like a pilot's foot pedals could make a passenger jet burst into flames, then crash in Rockaway, NY. Apparently the federal government has learned that the public will buy any lie, no matter how absurd, if it's repeated often enough.

There were dozens and dozens of reports by rescue workers on the ground at the WTC complex that heard explosions over an hour after the planes crashed into the towers. They felt explosions under their feet that were so powerful that seismographs registered them at 2.1 and 2.3 on the Richter scale. Only explosions could have caused them.

The weekend before the 9/11 WTC demolition, all power was shut down to install "computer cables." No one was allowed inside and all security cameras and alarms had no power for 30 hours. Computer cables don't connect with building electricity, so the need to turn off and close both towers to do so is indicative of another motive, like planting charges without alarms and video surveillance. Marvin Bush, brother to President George and Jeb, was a principal in Securacom, which was in charge of security for the World Trade Center. Didn't hear that on the TV news, did you?

Suckers who still buy into the monumental lie that aircraft crashes caused the collapse of both WTC Towers, cannot explain how a steel beam weighing twice as much as a Boeing 767 flew from one WTC building over 390 feet to bury itself very deeply into the neighboring American Express building.

Even harder to explain is why WTC Building 7, a block away, collapsed "because of fire," when it received no damage from the Twin Towers' collapse. No other skyscraper in the world ever collapsed because of a fire of any type, including that from a B25 bomber crashing into the Empire State Building decades ago.

Of all the air crashes in the USA over the past three decades, how many ground crashes resulted in not recovering their black boxes, containing pilots' voices (CVR's) and aircraft telemetries (FDR's) before and during impact? Yet not one usable black box was ever recovered from any of the four planes that reputedly were hijacked on 9/11. Not one.

Flight 93 that contained the "Let's roll!"myth,wherefour passengers supposedly tried to overpower the hijackers, did not crash into one small area like it should have. It's debris was spread over 8 miles, indicating that it was shot down by a military fighter jet, exploding in the sky and raining down debris over eight miles, "like confetti."

The WTC was the biggest crime, mass murder, 'hijackings' and air crashes in US history. Yet all the forensic evidence was immediately removed, buried or shipped to smelters so that not one investigator from any agency could inspect it. Who has that kind of power?

President Bush and all his staff swore to God to support and defend the Constitution of the United States of America , then apparently went on to violate their oaths of office by completely ignoring the Constitution. Bush maintains that he can ignore the U.S. Constitution and tap into private computers, phone lines, medical records and any other private citizens' data whenever he wants, by his self-declared doctrine of "Unitary Executive.” He claims that as Commander-In-Chief the president is the sole judge of the law, is unbound by the Geneva Conventions against torture and possesses inherent authority to subordinate the entire government to his rule - including Congress and the courts.

Bush also originated "Extraordinary Rendition.” This program, also condoned by Vice President Dick Cheney, involves the clandestine transfer of suspected terrorists to countries ruled by regimes that torture and commit other forms of cruel, inhuman and degrading treatment. Dr. William F. Schulz, executive director of Amnesty International USA, referring to a set of CIA flight logs obtained by his organization, said the logs were “...irrefutable proof that the United States is ‘disappearing’ people into secret facilities where they are held incommunicado without charge, trial, or access to the outside world.”

The American Reichstag Fire of the 9/11 "terrorist attacks" was created so that the American public would back the invasions of Afghanistan, Iraq, Syria and Iran in the name of "The War On Terror," while stripping away the rights of the same American public. The results have been the same as in Nazi Germany, suspensions of freedom of speech, freedom of assembly and private ownership of property. Citizens are forbidden to own the same weapons that their "servants," their police and military, carry to defend themselves. There is literally more freedom in most Third-World countries than now in the USA, which has ten times the per-capita prison population than the People's Republic of China.

Alexis de Tocqueville wisely observed, “I know of no country in which there is so little independence of mind and real freedom of discussion as in America.”

The 'War On Terror' is a sham to enable U.S. power to confiscate, to torture, to imprison without due process and to invade any country that the military-industrial complex fancies. When God was kicked out of public life, we know who stepped in.

Where are the cries for impeachment?

Where are the defenders of liberty? None of them seem to work in the broadcast or print media.

When are citizens going to demand that the cover up of 9/11 be kicked out the door along with the people who invented it? When will the truth be told, that THERE IS NO WAR ON TERROR, but only on oil and on citizens' rights?

The bear is there, but where are the mice with the courage to force him out the door?