The Eagle and the Bear?

The author of the article, who belongs to the Bear by ancient heritage and to the Eagle by birth, tries to shed some light on the subject, in terms of humanities

I have given much thought to why this relationship between the USA and Russia is never long lasting. Will it ever be? One can study Alexis de Tocqueville's writings on Russia and the United States of America, who concluded in the early 1830's that these two proud nations will go to war with each other.

Unlike our illustrious scholar, George F. Kennan, I was offended by the writings of “The Marquis de Custine” in his version of Russia in 1839. How could one set out in a fine carriage, with lace trimmed shirts and learn about Russia and her people? The souls in those ”smelly”  sheepskin coats were completely ignored, yet, these people were the core and soul of Russia, but then, not the nobility. Never mind! This is not an academic approach by any means but is imagined with literary lens, thus with only images and impressions.

Since I belong to the Bear by ancient heritage and the Eagle by birth, I shall try to shed some light on the subject, in terms of humanities. Remember too, that even Europe seemingly was surprised, when the Soviet Union was opened by Gorbachev, that so much of Russia was still in tact. So it is natural that Uncle Sam, with the competition in the Cold War would even be more astounded. Remember also, the religious gap is very strong, for basically Uncle Sam's officialdom, until of late, were Protestant in the thought process. The restrictive Russian Orthodox Church, seemingly, evolved cleansed and stronger than ever. Then too, the holy war with Rome and Constantinople has not subsided so that is another fear that lurks in this relationship with Russia and the Great Western Civilization.

But let us go beyond these never ending Holy Wars and scrape the surface, of why these two nations, who claim some basic Christian Beliefs, cannot endure a long term relationship?

We can begin by saying that Russia was an unexplored territory (beyond the nobility) so like the map makers of old, it did not exist or populated by savages. Right? Remember the world Barbarians! But then, there are other reasons why Russian (letters) or writings were ignored beyond poor translations. Here we must give credit to  Elymer and Mrs. Maude for fine translation of Leo Tolstoy's “War and Peace” even though, causing much distress to Sonia Tolstoy, along with the alienation of her daughter, Alexandra, as an example.)

But I believe there is a deeper level with this grave gap between the Eagle and the Bear! The spirit of the Russian writer and the English speaking nation creates a subliminal gap, which is harder to recognize. Remember too, the English language was evolved by an insular nation, surrounded by ocean thus the people are in constant converse with each other. True, ”Americanese” has some different phraseology, but yet, the EAGLE uses the so called English language. So the language and literature would reflect these characteristics in the people. Russians have lived on an endless sea, which it's self is a boundless plain, so it is highly possible that their nation found it's self a place on earth which corresponds best” to their inner-self's." Deep inclinations. Again, it may be that their land conveyed it's character to the Russian souls. So hence, we have this formlessness and irrationality that weaves into melancholy, along with emotional energetic outbursts.

And yet, the Russian literature is ageless and universal by merely changing the descriptive adjectives. So this literature, which is so great yet does not begin to touch the Western Reader, since it is not connected to their thinking. In the light

of this thought process, I watch the nuances between Pres. Bush and Pres. Putin thus try to read the subliminal messages but not what the journalist envision or even feel they are “primed” to project for the people to swallow. So is negative publicity the only way to handle these gaps of misunderstandings? I think not! Pres. Bush is, no doubt, surprised by Russia and her people, even to the aspect of their spirituality. That somehow convinced US that all was lost. So if Europe was surprised, one can imagine the shock in store for Americans.

Pres. Putin understands the possible gains by breaking the barrier that existed or always lurked between these two great nations. Remember too, sanctions make people and nations stronger in ways that are not obvious nor acknowledged by the one's responsible for placing these negative sanctions upon humanity!

There is a part that is not understandable to me, among many, that does not make sense in either nation that I belong. Russia with a lean population, seemingly , has allowed Americans to adopt her children by the plane loads, over the years, without any thought to the cultural; gap that exists between these two bumbling giants. And here, I must ask about the idea of what is; a better life if the genetic memory is never acknowledged?

On the other hand, America has her own children in Foster Homes, many times, going from one home to another but yet, not adoptable nor becoming a part of their own people.

Also, may I add that the negative publicity towards Russia and her people, are beginning to be too obvious to me. The Soviet Union could hardly be called a communist government, which in all probability, our Amish culture come close to this aspect. Soviet Union was overrun by tyrants, exchanging one injustice for another. But not communist Yet, if I may add, that the Old Believers in Russia, who would not escape to the Siberian tundra (had too much to lose), paid Peter the 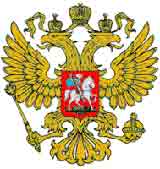 Great's double taxes imposed upon them and continued their very strong

Capitalism during the czarist times.

Remember, they had control of the grain trade, of which, Russia was a world leader in exporting this precious commodity, in Czarist times. Russia needs no lesson in capilatism, for this was also in early times, when her people paddled the Volga with bee's wax, wooden articles, along with precious furs and such. If there is a problem in this area, in today's Russia, then I suggest that Patriarch Alexsei II, have the Old Believer's do some teaching about capitalism. Remember too, it is not only the “Robber Barons” in Russia that is now a problem for Putin, but Uncle Sam has grown another crop of this greedy humanity, once again!

Now a miracle could happen that the Eagle and the Bear, would decide that both suffer a cancer of dire robber barons and join each other, to rid themselves of this human disease, for the American and Russian people. This would be a positive move for both the eagle and the bear!