Russian curlers Alexander Krushelnitsky and Anastasia Bryzgalova have been deprived of their bronze medals because of the doping. 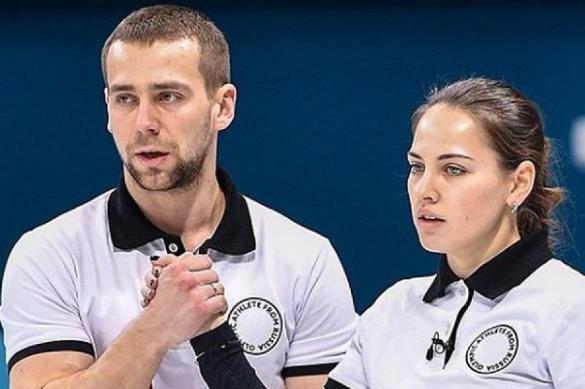 On February 22, it became known that the Court of Arbitration for Sport (CAS) canceled the hearings on the case of Russian curler Alexander Krushelnytsky, whose sample B confirmed the presence on meldonium in the athlete's body. Court representatives said that all parties to the dispute, including the Russian athlete himself, requested to cancel the hearings. The hope for a positive decision of the sports court on the fact of two positive doping tests was infinitely minuscule. To be more precise, there was no hope at all.

And yet again, we have given up the struggle and demonstrated admirable humility and humbleness instead. Although, when the athletes were making the decision to go to the Winter Olympics in Pyeongchang, (not all of them decided to go), they were apparently expecting honest sports competitions. It is obvious now that it was naive of them, to say the least, to hope for honesty and objectivity.

In this particular case, no one, of course, expected the court to take into account the pointless use of the drug in curling, let alone its single intake. Moreover, there was no chance to hope that the court would find that someone wanted Krushelnytsky to take a dose of meldonium unbeknownst to the athlete.

Why don't we fight for the truth? Why don't the athletes fight for their medals and their victories as long as they decided to take part in the Olympics during the times of major attacks on Russian sports? They shouldn't have hid their heads.

Every crime has a motive, apart from, of course, crimes committed by negligence. Does the world really believe that Russian athletes always think of ways to stuff themselves with doping drugs? Russian athletes were attacked brutally, they were humiliated during Olympic and Paralympic Games in Rio, strongest Russian athletes were not allowed to go to the Games in South Korea, and those who went there were forced to wear humiliating uniforms, as if they went to a Nazi camp. Still, the Western world was led to believe that even those Russians who went for the 2018 Winter Games, still wanted to take at least a little bit of doping to finally see if they can get away with it or not. Why did they go to the Olympics? Did they go there to win? I think they went there to check the vigilance of sports officials for the 1001st time.

An American journalist wrote that the Russians performed in Pyeongchang a lot worse than they did in Sochi in 2014 suggesting that many Russian athletes had used doping during the 2014 Winter Games. Therefore, the journalists concluded, the non-admission of Russia's best athletes to South Korea was the punishment that they deserved.

Well, did the Russian athletes have any chance to struggle for their truth? Are they not fighters?
How about judicial precedents from the past?

On October 7, 2017, officials with Athletics Canada Federation announced that world champion in pole vaulting Sean Barber had the right to perform at the Olympics in Rio de Janeiro despite his positive doping test for cocaine.

The good old BBC, a pioneer of modern journalism, said the athlete explained the presence of cocaine in his doping sample with a sexual intercourse. The 22-year-old athlete posted an ad on a dating site on the eve of the national qualifying tournament for the 2016 Games. The woman, who responded to the athlete's advertisement, said that she took the cocaine before meeting the athlete, but did not inform the latter about it. Barber claimed that he could not even imagine that it would be possible to find traces of cocaine in the body of a person, who kissed someone who had taken the drug a while ago. As a result, specialists came to conclusion that the athlete could not take such a small amount of cocaine.

The BBC noted that the athlete was facing a two-year disqualification, but the Canadian Ethics Commission concluded that there were no reasons for such a severe punishment. In Rio, Barber took the tenth place.

In 2009, a similar case occurred to French tennis player Richard Gasquet. The French tennis star also managed to prove that a banned substance found itself in his body through a kiss.

I understand that there is a special approach to athletes from Russia. This is not news, and those who went to Pyeongchang accepted those rules by default. It means, though, that they should now go to the mat. It's all about the will to win. It was like that in the past. Has anything changed when sports income came to replace country's prestige?