Russian curling player Alexander Krushelnytsky, who won Russia's first-ever Olympic medal in curling with his wife Anastasia Bryzgalova, stated that he was very sorry about the fact that their "historic victory" was thrown into the center of the doping scandal, which continues causing great harm to the Russian sport. 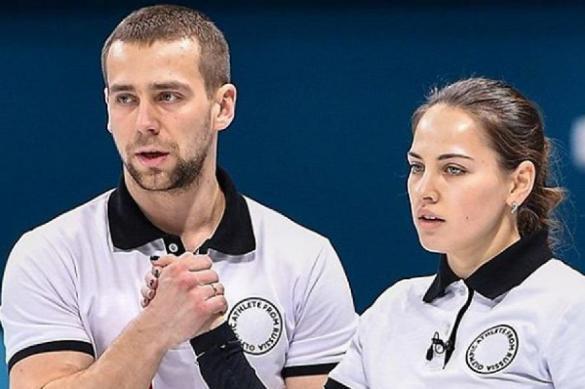 Earlier on Tuesday, representatives of the delegation of Olympic Athletes from Russia said that the analysis of Krushelnitsky's B sample test showed the presence of meldonium in it.

"I am openly stating that I have never ever used illegal drugs, nor have I resorted to any other dishonest ways of performance in sports," Krushelnitsky said in an official statement published on the website of the Curling Federation of Russia.

The athlete assured that he always tried to closely comply with all anti-doping rules. According to Krushelnytsky, the positive test for meldonium has come not just as a shock for him, but also as a huge blow to his reputation and sports career.

"Only a person completely devoid of common sense can use any kind of doping drugs, such as meldonium, on the eve of the Olympic Games. That's why I, like no one else, is interested in investigating the causes of what has just happened," Krushelnytsky said.

The athlete also apologized to his fans and partners in the Olympic team for not being able to protect himself and Anastasia Bryzgalova from the problems that they had to face.

In a statement issued on Tuesday, the OAR said that the concentration of meldonium in Krushelnitsky's doping sample showed a single intake of the drug, although a course treatment was required to achieve any effect.

"The concentration of meldonium found in the sample indicates a single use of the drug, which is absolutely meaningless from the point of view of achieving any therapeutic effect on the human body," the OAR statement reads.

The head of the Curling Federation of Russia, Dmitry Svishchev, stated that he would seek assistance from investigative authorities of South Korea and the security service of the organizing committee of the Olympics in Pyeongchang in investigating how meldonium could find itself in Alexander Krushelnytsky's body.