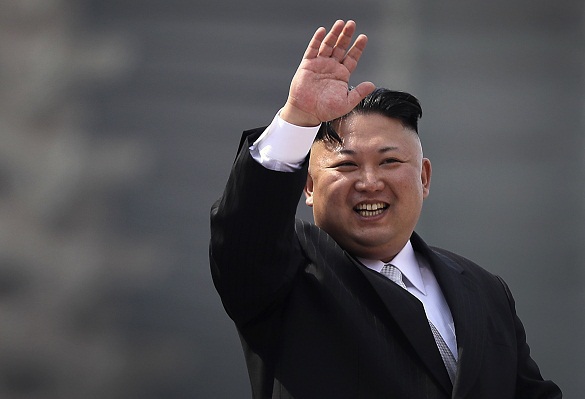 Urgent warnings of a radiation leak have been issued after the collapse of a tunnel under North Korea's 7,200 foot high Mount Mantap, under which the country tests their weapons systems.

The accident, believed to have happened on 10th October - though it only came to light on 31st October - is a disaster which is reported to have killed two hundred people. Were it anywhere else on earth it would surely be a headline tragedy, with Heads of State sending their condolences and offering assistance.

Apparently, however, the parents, sons, daughters which are the workforce of The Democratic People's Republic of Korea (DPRK) are children of a lesser God and the 'phone lines, emails are seemingly silent; the Eifel Tower and Brandenburg Gate have not been lit with the nation's colours in memory of those lost and mourned.

Dangers of radiation are the only headlines, assistance to attempt to assess and curtail it by the world's expert bodies and institutions; hands held out in the light of a major disaster, have not been forthcoming.

Business Insider's Alex Lockie reports that according to North Korean sources, the tunnel initially "collapsed on 100 workers, and an additional 100 went in to rescue them, only to die themselves under the unstable mountain."

Not only is there no help from the "international community", but:  "If the debris from the test reaches China, Beijing would see that as an attack on its country, Jenny Town, the Assistant Director of the U.S.-Korea Institute and a Managing Editor at 38 North, previously told Business Insider."

Feckless testing by the USA

Conveniently forgotten is America's fecklessness in testing in Nevada, where the mushroom clouds could be seen a hundred miles away and: "Las Vegas experienced noticeable seismic effects" ("Nevada Test Site", Wikipedia) and the fate of the so called "down-winders" who suffered radiation related diseases from the nuclear fallout.

"No one has shown more contempt for other nations and for the well-being of their own people than the depraved regime in North Korea ..." Donald Trump told the UN General Assembly in September. He is clearly ignorant of the criminal nuclear history of his own country.

Also apparently forgotten are the US and UK atomic testing in the Pacific (1946-1962) for which servicemen - unwarned of the dangers - who survived, fought for compensation for cancers and deformities of their children until the end of their lives. A few, now very elderly, still fight on.

The population of Bikini Island of course, was evacuated and still remains so radioactive that families or descendants have not been able to return. Another of America's disposable populations.

Whilst it is still not certain whether North Korea has developed nuclear weapons, they have been testing the possibilities in response to over sixty years of US threats. However, unlike the US, their tests have been undertaken under a vast mountain and: "Successive tests have so far not caused any radiation leaks in nearby regions", analysts said recently.

However, in the week of the collapse there was a stark warning that:

"Continued nuclear testing by North Korea could trigger a radioactive leak, South Korea's chief meteorologist warned this week. Nam Jae-Cheol, the head of the Korea Meteorological Administration, said the hollow space in the bottom of the mountain where the tests are conducted could implode, leading to radioactive material seeping through."

Moreover: "Scientists from the Chinese Academy of Sciences' Institute of Geology and Geophysics last month also warned about the possibility of a catastrophic implosion in the mountains ..."

Meanwhile the same report states that North Korea, surely in the light of Trump's apocalyptic threats to the nation of just 25.4 million, "was reportedly conducting mass evacuation drills and blackout exercises in recent days amid increased threats of nuclear war." Poignant and shaming.

But if there is, rightly, such fear of radiation leakage, what, as he has threatened, if Donald Trump unleashes his threat of "fire and fury like the world has never seen"?

On 22nd October, Trump decided that he was preparing to put the US fleet of B-52 fully nuclear capable bombers on 24-hour alert. "This is yet one more step in ensuring that we're prepared", Gen. David Goldfein, US Air Force Chief of Staff, told Defense One.

The first targets, as Trump has made clear, would be the DPRK's weapons facilities, which would make the horror of the current leak fears pale in to insignificance. And as said before, the region, indeed the planet could be rendered incinerated history.

The US President, now in a tight corner, with impeachment an approaching possibility and with seemingly increasingly fading grasp on reality, might just resort to such insanity as a diversionary tactic.

Time for neighbouring countries and US allies to use this disaster to put out the hand of friendship, offer help, diplomacy and normality to a country which has literally built itself up from the ashes, of every town, city and village destroyed by America little over sixty years ago.

And the time to act is now. Next week might be too late.

Incidentally, Donald Trump is to leave for the region and for South Korea on Sunday. He was to visit the border area, a must-do photo-op for visiting warmongers. The day the possible radiation leak was announced, he cancelled the visit.

Trump has a phobia. In his 1997 book "The Art of the Comeback", he wrote of how he hated shaking hands because of the risk of germs: "One of the curses of American society is the simple act of shaking hands, and the more successful and famous one becomes the worse this terrible custom seems to get.

"I happen to be a clean hands freak. I feel much better after I thoroughly wash my hands, which I do as much as possible."

There are reports alleging that he prefers to drink with a straw incase the vessel he drinks out of carries the germs of others.

When Theresa May visited him a week after his taking office, there was speculation that the reason he gripped her hand so tightly ascending stairs was because of his fear of germs on handrails grasped by others before him.

For all his "fire and fury" perhaps he has just realized that no amount of washing can flush off radiation. Any chance that is why he has so suddenly cancelled his visit to the border? Just wondering.