BLAST: The definition of the foreign policy of the USA

BLAST - Bullying Lies Arms Subversion Terrorism, the ABC of Washington's foreign policy whose modus operandi is arrogance, belligerance and chauvinism. We can apply the BLAST analysis to each and every one of Washington's interactions with sovereign states in the last fifty years, an ingrained policy mix of incompetence and sheer evil. 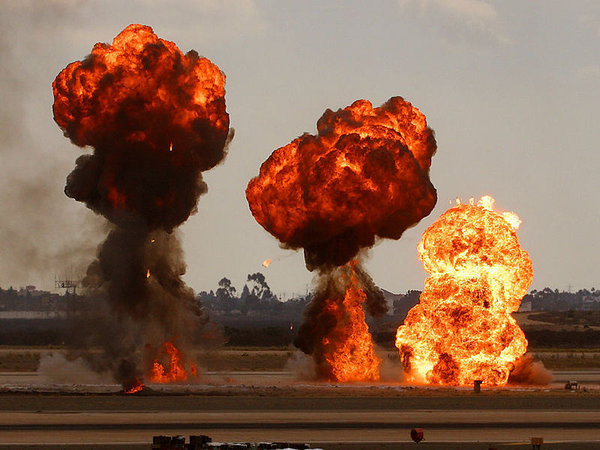 Taking a look at the foreign policy over the last half-century, we can increasingly see what started in 1917 at the time of the end of Isolationism and the beginning of Interventionism in the First World War, taking shape and morphing into what we have today. The last twenty years are a perfect mirror of Washington's BLAST policy.

BLAST - Bullying, Lies, Arms, Subversion, Terrorism, the modus operandi of Washington's international relations. BLAST 1999 - let us start with Kosovo, where the Province of the Republic of Serbia was torn out of the country to which it belonged, and belongs (because Kosovo is and always will be part of Serbia), Kosovo Liberation Army terrorists were armed and equipped, organs and weapons traffickers and terrorists were wined and dined on Capitol Hill, people who beheaded Serbian civilians and conducted terrorist attacks against the police were hailed as heroes. Today Kosovo even has its own soccer team, competing in UEFA competitions as a separate State despite the fact that its status as anything other than a Province of the Republic of Serbia is meaningless under the precepts of International Law.

BLAST 2001 - let us move on to Afghanistan, blamed for the 9/11 attacks although Afghanistan itself was not responsible, there was more evidence pointing towards the Saudis, that great western ally whose human rights record is more deplorable that that of the States the Empire has attacked, which massacres civilians today in Yemen (since you started reading this piece six Yemeni children have died as a direct result of Saudi military action). The BLAST policy was responsible for the utter chaos in Afghanistan in the first place, as Mujaheddin terrorists were sent into the country to create a nightmare into which the Soviet Union was sucked, to prevent further contagion into its southern Republics.

BLAST 2003 - Iraq. More bullying, more lies, lies that Iraq had Weapons of Mass Destruction, lies that Iraq was procuring yellowcake uranium, lies that Iraq posed a direct and immediate threat to the USA and its allies based on a thesis copied and pasted from the net and sexed up by eternal Chief Chihuahua the British Prime Minister (it matters not which), armed intervention throughout the 90s with military aircraft strafing fields of cereals to deprive Iraqi civilians of food, arrogance and insolence in claims that "Saddam must go".

BLAST 2011 - Libya. Same. Copy and paste what is written above - threats, lies that Gaddafy was bombing his own people (lies) including suburbs of Tripoli (lies), the use by Washington and its FUKUS chihuahuas (France-UK-US) of terrorists to implement policy, terrorists on the list of proscribed groups of the British Foreign and Commonwealth Office. The same year that the Syrian tragedy started, now thankfully all but solved by the intervention of Russia which in a short space of time countered the aims of the western-backed terrorist groups and saved Syria and the Syrians from a terrible sectarian fate.

BLAST Venezuela - Bullying, Lies, Arms, Subversion, Terrorism, once again the tools used by Washington to conduct its "diplomacy" in its traditional playground, Latin America. We are not speaking about the whore house Cuba was before Castro took over, threw out the filth, shot the terrorists out of the sky and created a social model with 99% literacy instead of 90 per cent illiteracy. What dictator educates his people (and then exports the model overseas, helping dozens of countries for decades)?

BLAST Venezuela. 2002 - coup attempt. BLAST Venezuela - 2017. The Opposition, unelected, perpetrates murder of political figures, social activists and blocks government policy, asking the USA to impose sanctions and disrupts supplies of food and essential goods, then blames the Government and calls on the international media to condemn the model, call the President a dictator and create another front for the Empire to intervene. Venezuela has oil. We have seen this countless times as social models are sabotaged then accused of being police states when their security forces try to impose order.

BLAST Venezuela 2017. There are 19.5 million registered voters in Venezuela, in the 2015 election only 7.7 million favored the Opposition parties, two thirds favoring the Government. In a democracy, a two thirds majority counts for something. In a demagogy, the one third representing the oligarchy and supported by the USA (who else?) and its chihuahuas, has the right to rule the roost.

In the 2017 Opposition-organized unofficial election against plans to constitute a Constituent Assembly, only 7.1 million people voted. 28% of the vote. But some of these voted seven, ten or fourteen times. Fact.  Of the 102,000 voters registered to vote abroad, some 600,000 voted. A week later, when the official democratic election was held on whether or not to set up the Constituent Assembly, the Opposition parties boycotted the vote and over 8 million people cast their votes in favor. The western media reiterated the lies of the Opposition, namely that the vote was rigged but due to the format of the electronic vote, this was proven to be physically impossible. In fact the Constituent Assembly invited the National Assembly of Venezuela to discuss matters of importance and once again the Opposition interests refused and blocked policy.

Where next? The conclusion is that those of us who have been covering international affairs over the last two decades have become immune to the disgusting and immoral BLAST policies pursued by Washington and its sickening chihuahuas. Basically, nothing surprises us. Just when you think it could not possibly get any worse, it does.

Topics syria
18:18
Ukraine invites NATO to join conflict with Russia directly
17:57
Zelensky won't negotiate with Russia while Putin is president
16:20
Putin signs agreements incorporating DPR, LPR, Kherson and Zaporozhye regions into Russia
15:39
Putin delivers landmark speech in the Kremlin
15:15
Lukashenko: If Europe wants it, the war may end in a few days
14:54
Ukraine and the West may force Russia to use tactical nuclear weapons
13:33
Russia to take control of entire Donetsk People's Republic within its 2014 borders
19:02
Mobilised citizens to control and defend new Russian territories
15:52
USA can still crush Russia, but it can also save the world from chaos
14:36
Polish FM: NATO will take part in Ukrainian conflict provided one condition
Russia
Senator Valentina Matviyenko: Let the whole world wait till October 4