Iraq: Will Tony Blair Finally Stand Trial for his part in the "Supreme International Crime"? 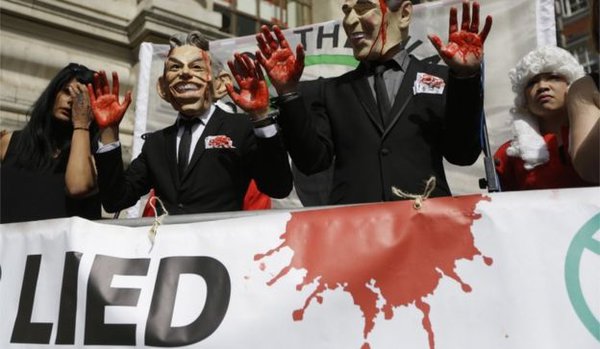 On 30th November last year, Michael Gove, currently UK Environment Minister, pretty well unloved by swathes of the population whatever Ministry he heads, declared, at the post-Chilcot Inquiry debate in Parliament regarding Tony Blair's role in dragging the UK in to a monumental tragedy for which history will not forgive: "History, I think will judge him less harshly than some in this House do." Deciding whether or not to illegally invade Iraq was a "finely balanced act", fantasized Gove.

It was not. It was a pack of lies, many of which came from the Blair regime, as confirmed by Colin Powell's delusionary address to the UN on 5th February 2003, in subsequently unearthed correspondence and of course, the Chilcot Inquiry.

On 15th September 2004, the then UN Secretary General, Kofi Annan, in an interview with the BBC World Service, asked if the invasion was illegal, stated: "Yes, if you wish." He continued without caveat: "I have indicated it was not in conformity with the UN Charter. From our point of view and from the Charter point of view it was illegal."

They broke the law, nothing happened. Crime pays.

Blair, his Foreign Secretary, Jack Straw and his Attorney General Lord Goldsmith did not face a Nuremberg type trial - and surreally, Blair, after his 2007 resignation was appointed Middle East Peace Envoy. Straw and Goldsmith went back to business as usual.

However, after fourteen years, maybe two million deaths, the decimation by ISIS, the US, and the UK of Iraq's (Mesopotamia's) history, culture stewardship and witness, over millennia, to one of the world's great, ancient civilizations, there is a chance that Antony Charles Lynton Blair, Jack Straw and Lord Goldsmith may yet face a Court of Law.

In April this year the UK Attorney General, Jeremy Wright, intervened in an attempt to halt a private prosecution of the three brought by General Abdul-Wahid al-Ribat, former Chief of Staff of the Iraqi Army under Saddam Hussein's government.

The Attorney General argued that the basis of the case, the crime of aggression "the supreme international crime" as enshrined in the Nuremberg Tribunals, did not apply in British law and that the former Prime Minister, Blair and his Ministers had: "implied immunity as former Head of State and government Ministers, therefore offence not made out ... Allegations involve potential details being disclosed under the Official Secrets Act for which Attorney General and Director of Public Prosecutions consent are required." The implication seemingly being that those consents would not be forthcoming.

However, in direct contradiction, relating to the argument regarding the crime of aggression: "In his 2003 memo on the legality of the Iraq war (Lord) Goldsmith, then Attorney General, appeared to concede the key point of those now seeking his prosecution. 'Aggression is a crime under customary international law which automatically forms part of domestic law' ", he wrote in an advice to then Prime Minister Blair prior to the invasion.

Nevertheless the case was dismissed by the Judge at Westminster Magistrates Court. The legal team for General al-Ribat, led by Michael Mansfield QC and lawyer Imran Khan are not easily deterred.

Mansfield has been described thus: "The radical lawyer has become an icon in a disenchanted age ... (Mansfield's) high profile victories take on a hallowed significance: the good guys against the rotten state ... with a flourish of his insolence and a refusal to shut up they flock to him ... and he looks after them all. The Establishment loathes him." (Guardian, 25th October 1997.) Imran Khan: "is one of the most highly regarded human rights layers in the country" and "a rebel with many causes." (The Lawyer, 17th June 2015.) "My objective is to make sure the State is held accountable", he is quoted as saying.

This week, on Wednesday, 5th July, General al-Ribat's case returned to the High Court in an appeal which is being heard by the Lord Chief Justice, Lord Thomas of Cwmgiedd, and Mr. Justice Ouseley.

The General had been motivated, Mansfield told the Court, by the findings of the Chilcot Inquiry that the Iraq invasion was unnecessary and undermined the United Nations.

Iraq was not an immediate threat

'Mansfield summarised the report's findings as: "Saddam Hussein did not pose an urgent threat to the UK, intelligence reporting about [Iraqi] weapons of mass destruction was presented with unwarranted certainty, that the war was unnecessary and that the UK undermined the authority of the UN Security Council."

"Nothing could be more emphatic than these findings," he said. "It was an unlawful war."

He further argued that in 1945: "... when the British prosecutor, Sir Hartley Shawcross, opened the cases against Nazi leaders at the Nuremburg war crimes trials at the end of the second world war, he acted as though the crime of aggression had already been assimilated into English law."

James Eadie, QC. representing the Attorney General, Jeremy Wright stated that: "The crime of aggression is not know to English law" and does not exist in the statute book.

Sabah al-Mukhtar, of the Arab Lawyers Network, commented of the case: "This is just looking at whether the first Court was right in refusing to entertain the case.

"The Magistrates Court dismissed it on the grounds that Tony Blair had immunity and that the crime of aggression was not part of English law. Many think they were not correct on that."

The case can be brought in Britain since the British were part of the occupying forces in Iraq, thus General al-Ribat, now living in exile is: "under the European Convention on Human Rights, deemed to have been within the jurisdiction at a relevant time."

The High Court's decision has been reserved to allow a further week for the General's legal team to make "additional specified submissions." If the Appeal is not dismissed: "the issue of whether the crime of aggression exists in English law will be sent up to the Supreme Court to decide."

It has not been Blair's week. In the light of the Court hearing, Sir John Chilcot - who headed the seven year Inquiry in to the decimating attack on Iraq and found that the Blair Cabinet's decisions on the matter had been "far from satisfactory" - broke a year long silence in an interview with the BBC.

Asked if the former Prime Minister had been as truthful with him and the public as he should have been, Sir John replied:

"Can I slightly reword that to say I think any Prime Minister taking a country into war has got to be straight with the nation and carry it, so far as possible, with him or her. I don't believe that was the case in the Iraq instance."

Millions would surely agree, including a swathe of the media, as encapsulated by media correspondent Roy Greenslade exactly a year ago, on the publication of the Chilcot Inquiry. The sub-heading was: "Without exception, the 'feral beasts' of the press tear the former Prime Minister apart over the Iraq invasion, leaving his reputation in tatters."

Relevant to this week's case may be that: The Tribunal also added several recommendations to its verdict:

1) Report findings in accord with Part VI (calling for future accountability) of the Nuremberg Judgment of 1945 addressing crimes of surviving political and military leaders of Nazi Germany;

2) File reports of genocide and crimes against humanity at the International Criminal Court in The Hague;

3) Approach the UN General Assembly to pass a resolution demanding that the United States end its occupation of Iraq;

4) Communicate the findings of the tribunal to all members of the Rome Statute (which governs the International Criminal Court) and to all states asserting Universal Jurisdiction that allows for the prosecution of international crimes in national courts; and

5) Urge the UN Security Council to take responsibility to ensure that full sovereign rights are vested in the people of Iraq and that the independence of its government be protected by a UN Peacekeeping Force.

It is ten years nearly to the day (27th June 2007) since Blair left Downing Street, left Iraq bathed in blood and tears and walked off to make £millions and a joke of all peace stands for, as a "Peace Envoy."

Perhaps, at last, justice may have a chance, one which might set a precedent and also deter any politician or leader from embarking on the "supreme international crime", ever again. Here's fervently hoping.