Yes, Prime Minister; Your Dorian May picture is safe (for now)

Oscar Wilde was no stranger to the limelight. The Irish playwright and novelist also experienced the opposite. In nineteenth century England, Wilde was cast into prison for his perceived wrong proclivities in re choosing his social circles. The Victorian high society adjudged him immoral. The charge of homosexuality was at the center of their displeasure. Alone, in the stank and confined to a dungeon, Wilde was left to ponder his future. The dim lamps of incarceration were in stark contrast to what he was accustomed to. Somehow, he had to find a path to freedom. It came two years later. Poverty followed. Wilde despite his literary success, especially his novel 'The Picture of Dorian Gray', never made it back to the spotlight of the English elites. He was dead within three more years, at age 46. 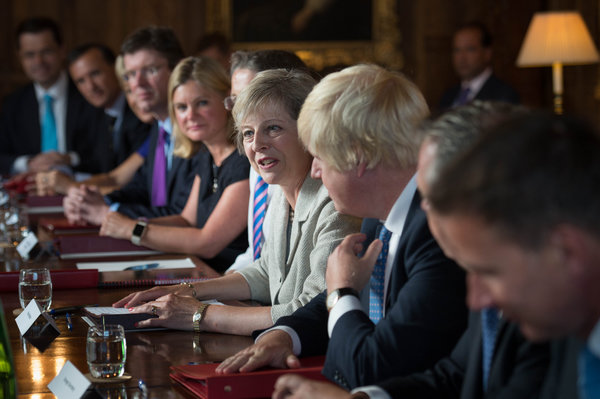 What has Oscar Wilde to do with Theresa May? Everything when you factor in the British Prime Minister's public record vis-à-vis Wilde's artful depiction of, Dorian Gray, the main character of Wilde's novel by the same name. Aside from a comely physical appearance, which really is a minor theme in Wilde's novel, the two personas though separated by a century have much in common. This is especially true when one delves deeper into their respective psyches. Both May and Gray are prominent personalities. Each had an impact on society. They made the social scene albeit in different fields; but the effect was almost the same. Life atop England's social ladder was exactly where they wanted to be. Public life, with all its ostentatious trapping comes with a price. Often the price enacted is much more than one can bear. In Dorian Gray's case, the initial warm receptions started to wane. His charms, though still in fashion had spread far too thin. The ubiquitous flatteries now lacked the former luster. Then there was the problem of debt. His kept mounting. Gray was increasingly beholden to not only friends, but also to mere acquaintances and strangers alike, both well heeled and seedy.

In life, contempt often follows familiarity. Gray was at that juncture. The flame of his youth still burned bright. If he could no longer woo people to his rescue, then he would resort to blackmail. No one would be suspicious. Even theft could be hidden; but for a while. However when one commits murder, make that the heinous murder of a close friend who discovered the lair containing skeletons of his former crimes, it was just a matter of time before the clues all pointed to Dorian Gray's real portrait: grotesque in its entirety.

Now Theresa May is hardly at a point in her political career where she would ever consider crime to solve her problems. She is not beyond reproach though. Many times this past election, May, Britain's Prime Minister only by acclamation was slow to accept blame and accountability. In the aftermath of the Islamist terror attacks on London Bridge and in the adjacent Borough Market where radicalized ISIS recruits murdered eight innocent people and injured scores of others, May still could not utter the words 'Islamist Terrorists'. She instead ducked for cover. Her tepid words brought little solace. "Enough is enough". What exactly was she saying? Did May mean that the young man mowed down by the terrorists' van on London Bridge, the resulting impact which threw him in the Thames would be the last innocent victim to die at the hands of Islamist terrorists? That is precisely the message that U.K. Brits needed to hear. After experiencing three terror attacks in the space of a month, citizens needed much solace from their 'leader'. None came).

May's actions prior to becoming Prime Minster suggested strongly that she preferred cover-ups to resolute action. As Home Secretary in Cameron's Cabinet, May was committed to austerity measures rather than providing Brits with safety and security on their streets. She cut the Police Constabulary ranks in half; from 20 thousand, Bobbies on the beat now number about 10 thousand. How could she defend such a callous act? She tried the balanced budget excuse. It failed; even utterly. Labor's Jeremy Corbyn pounced. In the aftermath of the terror attacks, her political opponent disseminated her past failures everywhere in his campaign message. To a large degree it worked. Labor surged in the polls.

Her announcement and quick retraction of the healthcare 'dementia tax' was another case in May's covering up for a lack of an honest message to the voter. Sounds so much like Margaret Thatcher's 'poll tax'. Many Tories remember that debacle too well. Yes, May 'won' the election; but she lost the former majority that her Tories enjoyed at Westminster. How pyrrhic is that?

Now, Prime Minister May's reputation is still safe. Give it time. In about six weeks, the Tories brief honeymoon with the DUP Northern Ireland contingent will be over. Then Britain experiences déjà vu all over again. Moreover, when the Fleet Street press burst on the scene at 10 Downing Street, in horror (maybe delight), they will witness Dorian May's portrait in her true likeness, and replete with many Tory darts emblazoned with Brexit colors dangling from the official canvas. Nothing new under The Empire's setting sun.