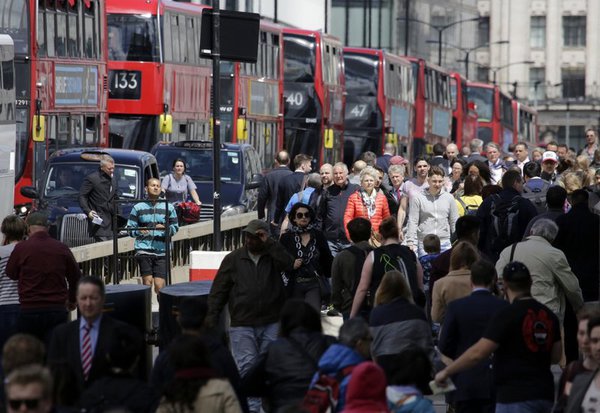 Perhaps the attack which killed seven and injured forty eight - twenty one critically - on a balmy Saturday evening on London Bridge and nearby Borough Market, a popular area of cafes, bars and restaurants, could be described in one word: "blowback."

The lesson could not be starker. In December last year, after the Berlin Christmas lorry attack, a contributor on an ISIS forum called for more attacks with the comment: "Muslim countries will not be the only ones that are sad."

After the attack on a concert in Manchester two weeks before London Bridge, killing twenty three, injuring one hundred and nineteen, twenty three critically, Islamic State responded that it was a response to Britain's: "transgressions against the lands of the Muslims" and a victory against "the Crusaders." Bush and Blair, please note.

US and British bombs drop

As US and British bombs drop and allied soldiers slaughter, year after year, decade after decade, in majority Muslim countries, it is, as in London, Manchester, Paris, Berlin, Brussels, Nice, the innocent going about daily business, enjoying an evening meal, celebration or sports event who pay the ultimate, heartbreaking price. In Iraq and other countries under "allied" assault it is also those called "insurgents" who are in fact simply nationals who want their country, illegally invaded or attacked, back.

"2017 will be the year of the massacre" was written on another forum.

Also in December, Europol, the law enforcement arm of the EU issued a stark, lengthy Report with warnings of attacks: "both by lone actors and groups" are "likely to take place in the near future ... "

The UK belongs to the "Global Coalition", a sixty eight country partnership across Europe, the Middle East, Asia, Africa and the Americas "committed to defeating IS", seemingly regardless of human cost and reducing countries to rubble.

"The UK has conducted more than 1,200 airstrikes in Iraq and Syria since it became involved - more than any other coalition country bar the United States.

In all, the U.S. bombed Iraq, Syria, Pakistan, Afghanistan, Libya, Yemen, Somalia in 2016, raining down an average of seventy two bombs a day, the equivalent of three an hour. 1,337 were dropped on Afghanistan, up from 947 in 2015, three on ally Pakistan, fourteen on Somalia and thirty four on Yemen.

However: ' ... estimates were "undoubtedly low, considering reliable data is only available for airstrikes in Pakistan, Yemen, Somalia, and Libya, and a single strike, according to the Pentagon's definition, can involve multiple bombs or munitions." '

Of course all countries in the Global Coalition will be regarded by their victims and those emphasizing with them, as equally culpable, since in a "coalition", all bear responsibility for the actions of another, with British Ministers ever trumpeting the "special relationship" with the US.

May ignores the connection

In the UK, Prime Minister May seems either not to make the connection, or chooses to ignore it. Moreover, the Manchester suicide bomber was twenty two year old Salman Abedi, British born, of Libyan parents who were part of the murderous opposition to Muammar Gadaffi's government (which had given it's citizens the highest standard of living in Africa.)

When she spoke after Manchester's tragedy: "May's speech did not address allegations that in 2011, while she was Home Secretary, Libyan Islamists previously under surveillance in Britain were given back their passports and helped by the government to fly to Libya to fight Muammar Gadaffi's administration.

Where is the Jihadist funding report?

"Nor did she say why the government is refusing to publish a report on jihadist funding - allegedly because it fingers Saudi Arabia, Britain's arms industry's biggest customer."

Further, Abedi junior, although "known to the authorities" had returned to the UK from Libya and possibly Syria, reportedly, just days before his lethal attack.

In context, regarding Saudi Arabia, as The Intercept points out: "Labour leader Jeremy Corbyn has made the U.K.'s uneasy alliance with the Saudis an election issue, with voters going to the polls on June 8th. The Tories' ties to Saudi Arabia, Labour leaders charge, have resulted in record weapons sales - Conservative governments have licensed £3.3 billion ($4.2 billion) in arms sales to the Saudi military since the onset of the Yemen campaign. They are also noticeably reluctant to criticize Saudi's appalling human rights abuses.

"While Tory politicians have defended the arms sales to Saudis as a move to shore up Britain's allies in the region, Tory members of Parliament have collected £99,396 ($128,035) in gifts, travel expenses, and consulting fees from the government of Saudi Arabia since the Yemen war began." (5)

The unpublished Report referred to above was to be published in Spring 2016. Jeremy Corbyn and Liberal Democrat Leader Tim Farron have charged that the reason for its suppression is that it involves lucrative State customers including Saudi and other Gulf States "funding and fuelling extremist ideology."

This reluctance may well have roots firmly back in Baghdad Butcher Tony Blair's government. This, from The Guardian, 15th February 2008 is worth a few paragraphs quote:

"Saudi Arabia's rulers threatened to make it easier for terrorists to attack London unless corruption investigations into their arms deals were halted, according to court documents revealed yesterday.

"Previously secret files describe how investigators were told they faced 'another 7/7' and the loss of 'British lives on British streets' if they pressed on with their inquiries and the Saudis carried out their threat to cut off intelligence.

"Prince Bandar, the head of the Saudi National Security Council, and son of the Crown Prince, was alleged in court to be the man behind the threats to hold back information about suicide bombers and terrorists. He faces accusations that he himself took more than £1bn in secret payments from the arms company BAE.

"He was accused in yesterday's High Court hearings of flying to London in December 2006 and uttering threats which made the Prime Minister, Tony Blair, force an end to the Serious Fraud Office investigation into bribery allegations involving Bandar and his family.

"The threats halted the fraud inquiry, but triggered an international outcry, with allegations that Britain had broken international anti-bribery treaties.

"Lord Justice Moses, hearing the civil case with Mr Justice Sullivan, said the government appeared to have 'rolled over' after the threats. He said one possible view was that it was 'just as if a gun had been held to the head' of the government." (6)

Apart from accusations of double standards on human rights and terrorism, there is another towering double standard. As always, rightly, when there is a tragedy in the West, world leaders send messages of sympathy and outrage, the Eifel Tower or Brandenburg Gate go dark or display the victim country's colours.

Heartwarming messages poured in to London from leaders across Europe and the world offering prayers, solidarity, hearts and minds. The exception was Donald Trump who can ever elevate tastelessness to new heights who used the grief of others to push his travel ban and to insult the (Muslim) Mayor of London.

Two of the three dead alleged attackers have now been named by the police as east London based, Pakistan-born Khuram Butt, 27 and Rachid Redouane, 30, who police said had claimed to be Morrocan-Libyan and had until recently been living in Ireland. He was identified by his Irish residence identity documents issued by Ireland's Department of Immigration. Perhaps Trump will rain 59 Cruise missiles down on Ireland.

Back to double standards, in just two examples out of Iraq's daily horrors, in July last year in vibrant Karrada, central Baghdad, two hundred and ninety two people were killed and over two hundred injured in a terrorist attack.

On 30th May this year, as people were breaking their Ramadan fast at a popular ice cream shop in Karrada at least fifteen were killed and thirty injured by another attack, both were, as London, said to be ISIS acts.

In between those two carnages have been near daily others across the country since 2003's invasion, as in Afghanistan since 2001, Syria and Libya from 2011, Palestine approaching seventy years devastations. How many Western world leaders have sent prayers, thoughts, solidarity, hearts and minds to them?

Or do they just settle for Trump's travel ban?