Theresa May: A disastrous choice for Prime Minister

Theresa May is perhaps the worst and most dangerous candidate any political party has forwarded to stand for election as Prime Minister in recent political history. Far from being strong and stable, she is the champion of U-turns, it was this incompetent pen-pusher who cut the police force back to breaking point and now tries to appear high and mighty against terrorists. 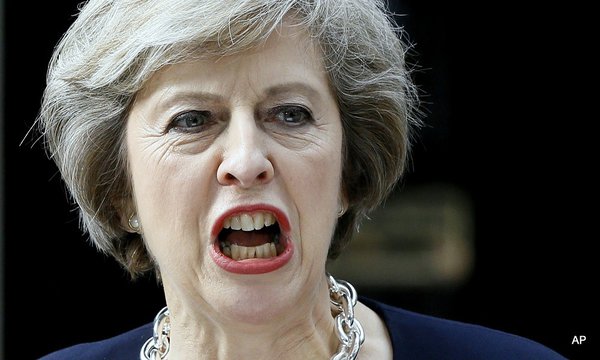 The mouth of Hell

She dodges debates and appears as little as possible in public because she knows that just by appearing and speaking, she will lose votes because she is that unlikeable. As for her policies, let us examine her track record. Every country in the world, practically, has some form of National ID Card, this being a formidable way to tighten internal security and track who did what when and where. In some countries you cannot cash a cheque without one and you need one to make any official transaction or administrative function, however insignificant. What did Theresa May do? She scrapped the scheme, proposed by Labor.

The Financial Times has accused Theresa May of making no less than nine spectacular U-turns meaning she says one thing and does another. So how can she be trusted? Certainly she has appointed as her Foreign Secretary a serial liar who ran the Brexit campaign on the back of a false claim that 350 million pounds a week would be available if the UK left the EU, which is not the case. May herself sat on the fence during the campaign making noises which swung both ways. Leadership? Maybe she should try it some time.

May's party has destroyed the future of Britain and Britons by effectively taking the UK out of the European Union. On the other side of the Channel, people are queueing up to receive the financial players as they prepare to leave the City and deprive London of its fattest cash cow. The negotiations will not he easy - Britain will stand alone and be punished. And which party caused the situation? The USA will give a few pats on the head and mumble about a special relationship while in private they chuckle and laugh at the Brits' inane policy of crawling round Washington's legs and holding hands with Presidents.

May's party has taken Britain to the brink of disaster. The Conservative party has cavorted with terrorist groups in both Libya and Syria, interfering in both conflicts and putting London on the radar for retaliation attacks. The British backed the campaign in Libya to strafe the bombing of the water supply network and the electricity grid "to break their backs" and the British have been involved with LIFG, a terrorist group on its own list of proscribed groups, the British government considered as a legitimate military target the murder of Gaddafy's grandchildren in a bullseye strike on a civilian home during the conflict.

Her foreign policy in tatters, nobody believing a word Britain says any more, and being increasingly regarded as a pariah, nasty state, Theresa May slashed the numbers of police. Not by one thousand, not by two thousand, nor by five thousand, nor ten. Bobbies on the beat were reduced on Theresa May's watch by no less than 20,000 - cuts which have reduced policing to dangerous levels as indeed we see today.

Then we had the crisis in Border Control over the massive relaxation of checks on people coming into the country. Then we had the billboards on the backs of trucks saying "Go home", aimed at illegal immigrants. Then we had abuse of female detainees at Yarl's Wood detention center and then Theresa May banned the UN representative from visiting.

In short, a tissue of incompetence from beginning to end. Theresa May might be a "jolly good cook" but she is not a good leader. She is an incompetent, over-rated, out-of-place, make-it-up-as-you-go-along pen pusher who might have been proficient as an accountant but who has been involved with the party that ruined Britain's future and whose ridiculous, unfounded and ill-studied policies have made Britain a dangerous place to live in, or to visit.