And here we are again Ladies and Gentlemen frontstage at the BBC - Theatre of Butchery, Barbarity and Cruelty. Welcome to Norway, the country which claims it is so civilized and high and mighty, and murders whales. Then it complains that the rest of the world takes issue with its sinister idiosyncracy. 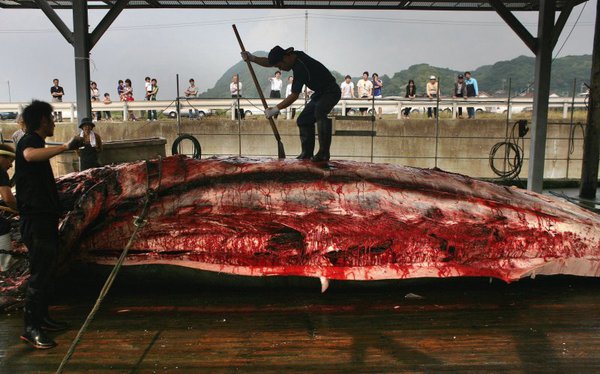 India leads the way in terms of compassion, respect for the environment and an enlightened approach towards our brothers and sisters, the animals we share our planet with, in declaring dolphins and whales "non-human persons" and thereby providing them basic rights of inviolability of the person and against illegal imprisonment and torture.

Not Norway. Norway commits an annual murder of Minke whales, hunting them down while braying like donkeys, firing an explosive harpoon into them and them hacking them to pieces to be sold as ingredients in beauty products. And in so doing, Norway has reached the status as the worst offender in whale slaughter, a pariah state.

Not Norway, No Way! Norway defends itself by claiming that the way it murders whales is humane because it only uses exploding harpoons. The fact is that more than half of the whales that Norway murders every year are pregnant. So Norway is murdering baby whales. In fact around ninety per cent of the whales are female and most of these are pregnant.

The Norwegian fisheries minister is called Per Sandberg and he has stated that he wants to double the number of whales murdered by Norway to 2,000 animals and wishes to sell the whale meat to the European Union. Norway intends to murder 999 Minke whales during the hunting season in 2017, making this country the worst pariah in the world in terms of whaling. With many of the whales pregnant, this figure is inaccurate. Instead of 1,000, the actual number will be 2,000 and what Per Sandberg proposes means that Norway is planning to slaughter 4,000 whales per year.

While Norway is not a member of the European Union, are these European values? If these are Norwegian values, maybe people can refuse to buy Norwegian products or to travel to Norway for a holiday. Norway? No Way!!