The latest buzzword on the Internet is fake news. But what is the difference between fake news, false news and censorship? And why this sudden panic about fake news, after the mainstream media has made millions by peddling lies and swapping pics for decades? Could it be that the MSM has lost the credibility battle by selling lies as news and now has nothing else to do but to lash out? 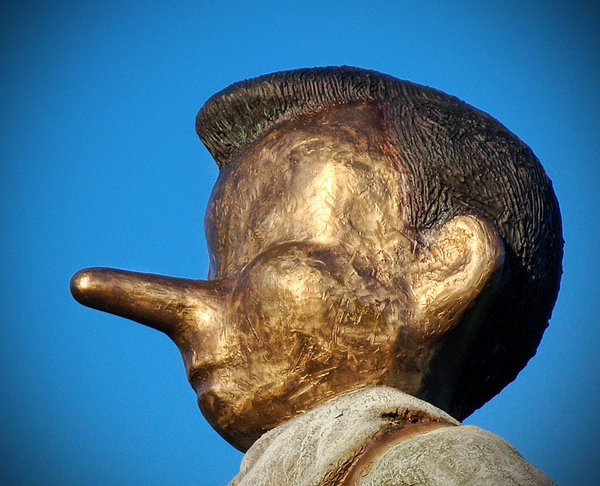 Suddenly everybody is speaking about fake news and is devising ways to stamp it out. Strange, these are the same people who made millions by inventing and peddling lies, selling them as the truth, the whole truth and nothing but the truth. These are the same people who claimed that Saddam Hussein's Iraq had weapons of mass destruction, when the only weapons of mass destruction deployed in Iraq were by NATO forces. These are the same ones who claimed that Saddam Hussein was procuring yellowcake uranium from "Nigeria" (which doesn't have any) in forged documents outed by Mohammed el-Baradei of the IAEA as false documents and lies.

These are the ones who copied and pasted a doctoral thesis from a decade earlier, sexed it up, and then claimed it provided evidence against Saddam Hussein's Ba'athist Government. Then they invaded, based upon this "wonderful intelligence" as US Secretary of State Colin Powell stated, and almost a million people were killed, millions of children were maimed or born with disabilities and birth defects.

These are the ones who posted pics of Greeks outside a Greek bank and stated it was Russia, these are those who posted pics of Iraq early 2000s and claimed they were Syria a decade later, the subject matter being children murdered by NATO, these are the same ones who took out of the Net footage of NATO aircraft strafing fields of cereals in Iraq in the 1990s, these are the same ones who have being hacking and blocking websites, blocking news sites - for instance, Reddit does not accept links to Pravda.Ru because, as they claim, the links are not substantiated and the reporting is biased. In an OPINION column?? And a link is a link.

In a nutshell, this is censorship. The web is not free. Facebook accounts are closed or hacked. During the NATO invasion of Libya my Facebook account was taken over by someone who linked the account to one [email protected] and I lost a thousand plus contacts. For what? For telling the truth about Libya, for saying that NATO was siding with terrorists on its own lists of proscribed groups, for saying that NATO was lying anf was bombing civilian structures.

As it did in Iraq, as it had done in Serbia.

So the conclusion is that by controlling information, you control public opinion. You can censor the Net all you want, you can hack and block alternative websites, you can launch a war against the social and progressive media. Just don't say that these are false or fake news sites when the social media by and large produces the real picture and the Mainstream Media (MSM) has been caught time and time again with its journalistic pants down around its ankles.