"I have a dream", a nice sound-bite attributed to Martin Luther King, in his case a very valid dream and one which became reality, turning a nightmare of prejudice and inequality for so many people into a multi-cultural and inclusive society. And suppose we had a collective dream called an ethical foreign policy? 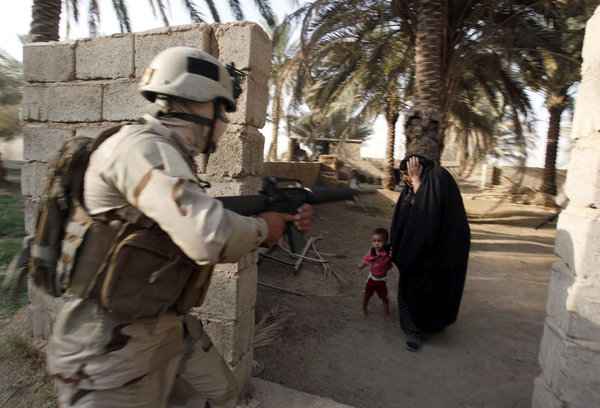 The release of the Chilcot report today, July 6, heralds the United Kingdom's seven-year quest for the truth over Iraq, although whether it will find the truth in the myriad of volumes and documents in the Report is another question. As I said at the time, and before the invasion, the USA and UK were about to commit one of the most monumental mistakes in the history of humankind and certainly the most serious breach of international law in recent times.

Iraq - the four-letter word in response

To those who level any accusation whatsoever against any country anywhere on Earth at any time, there is a four-letter word in response: Iraq. Never again can those which perpetrated this monstrosity of injustice claim the high moral ground in any form whatsoever.

The invasion of Iraq in 2003 was based upon a tissue of lies, peddled around the international community, sold at the United Nations Organization, debasing the nobility of international law, rendering the international community to the status of second-class also-rans and showing a total disrespect for responsibility, for nationhood and for each and every law, convention and precept enshrined in our collective civilization since the Treaties of Westphalia in 1648.

It is telling that the said treaties 350 years ago were signed in two rooms, one for Protestants and another for Catholics. Iraq marks a similar two-tier approach to international relations and diplomacy, namely the Anglo-Saxon Syndicate (ASS - USA, UK and Australia) versus the rest, later to morph into the FUKUS Axis (France-UK-US) with a similar invasion of Libya based also upon lies.

So the FUKUS and ASS Axes today bear visible witness to the fact that the Sinister Six Sisters, the BARFFS Lobbies (Banking, Arms, EneRgy, Finance, Food, PharmaceuticalS), can come together any time they wish, enabled through the political class whose strings they pull, and force an outrage upon humankind, killing hundreds of thousands of people, destabilizing a State, deploying military hardware against civilian targets, just because corporate greed eyes resources or a geo-strategic position.

This can be called anything but ethical. Ethics engenders telling the truth, it approaches crisis management following the fundamental precepts of diplomacy and democracy - debate, discussion, dialogue, it seeks to resolve differences using the legal forums in existence and with the legal power to act, in this case the United Nations Security Council.

So ethical was the western foreign policy in Iraq, that it was based upon pure barefaced lies about Iraq's Weapons of Mass Destruction program, lies about its chemical warfare facilities, lies using forged documents about procurement of yellowcake uranium from "Nigeria" (which doesn't have any), lies about the WMD delivery program, in the event a dossier based on a doctorate thesis copied and pasted from the Net a decade earlier and sexed up by Blair's office.

Worse, not only did they destroy a sovereign state and render it dysfunctional - even today bombs are going off almost on a daily basis, and the man who helped pull down the statue of Saddam Hussein in Baghdad claims it is the worst thing he did, because now there are one thousand Saddams swearing they will get revenge. They did the same in Libya, they are trying to do the same in Syria and they are eyeing up other victims for the same unethical, immoral foreign policy to be practiced.

And even worse still, they blame others, Russia for instance, for actions that have simply not been committed, accusations which are unfounded and accusations which themselves are more barefaced lies. The USA and UK invaded Iraq, Russia did not invade Ukraine - the NAF are perfectly capable of defending themselves against Fascists sent to murder them by Kiev. The USA and UK invaded Libya, Russia did not invade Crimea, which voted in a Referendum to rejoin Russia, as the Falklands Islands/Malvinas voted to retain British territory status.

Western foreign policy: lies, more lies and yet more lies. And they dare to make claims against those who follow international law to the letter. Proof of their policy are the handful of agents provocateurs present on the comments sections of newspapers which practice freedom of expression, such as the Russian media, reiterating the same lies and making anti-Russian comments across all the pages of all the articles.

The hearts and minds of humankind are not, however, with these spreaders of hatred or the liars which formulate western policy. Articles such as this and the indictment which follows belong to the new page of history which will form the backbone of the 21st century. What we hear from the West are the cries from a sinking ship.

My indictment of NATO over the Libya outrage