To add to the wanton destruction of world heritage in the museums of Mosul, Islamic State now proudly shows a video of the total and complete destruction of the ancient city of Nimrud, including its unique archeological treasures dating back to the thirteenth century BC. But what about the rumors that the USA is supporting Islamic State? 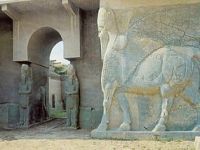 After Kosovo, after Afghanistan, after Iraq, after Libya and after Syria, the high moral card linked to Washington's foreign policy and that of its Poodles in Europe unfortunately does not exist. There is no moral card and if there is a card at all, it is a very low one without any value.

True, the United States of America and its Poodle in Chief, Britain, led the charge into Iraq based upon lies, after a decade of sanctions had caused the deaths of hundreds of thousands of children, destroyed the State and created the conditions for ISIL, later Islamic State, to appear, and watched as it spread throughout central and northern Iraq and eastern Syria.

Watched, and more, some say, because it was a useful tool to deploy against President Assad. They watched as terrorists in Syria used chemical weapons against Bashar al-Assad's forces and civilians, then lied again blaming President Assad as a pretext to go to war, until Moscow saved the day with the D-word, Diplomacy.

Allegations of US involvement with Islamic State

And now we have reports from Iraqi popular forces who have claimed to wiretap communications between the United States of America's armed forces and Islamic State militants, pointing towards the purposeful supply by the USAF of weaponry, medicines and food to IS.

The source of these allegations is Iran's Fars News Agency, and let us be honest, the Iranians have attacked nobody and to date have not been caught lying. The liars are those who consider themselves their enemies.

Fars News Agency (FNA) in turn quotes multiple sources, which claim that the USA is prolonging the conflict, making sure the attacks against Islamic State are cosmetic and while bombing raids are filmed taking off from aircraft carriers what do they actually drop? And where? According to the Commander of the Ali Akbar Battalion, fighting in Iraq against Islamic State, "the wiretapped ISIL communications by Iraqi popular forces have revealed that the US planes have been dropping weapons and foodstuff for the Takfiri terrorist group".

Speaking about "regular contact" between the US armed forces and IS, he referred to sentences like "a share of the ammunition" and "you will also receive your share". He claimed "The US forces have provided a lot of help to ISIL" and mentioned dropping points such as Spiker Base in Hay al-Qadessiya, Yassreb and al-Ramadi.

But there have been other reports. FNA quotes an official as having stated that in February "western powers" were already supplying Islamic State, while Jafar al-Jaberi, Coordinator of the Iraqi popular forces, states that the USA is trying to help the IS terrorists to return to the places that have been liberated by his forces. There are eye witness reports of US aircraft making drops in al-Havijeh, Kirkuk, while in al-Khas, Diyala, "coalition planes" were seen above the town "and they carried the Takfiri terrorists to the region that has been liberated from the ISIL control". Other reports state that drops have been made to Islamic State militants in the provinces of Diyala, al-Anbar and Salahuddin.

It does not end here. The Deputy Chief of Staff of the Iranian Armed Forces, Brigadier General Massoud Jayazeri, was quoted as saying "The US and the so-called anti-ISIL coalition claim they have launched a campaign against this terrorist and criminal group - while supplying them with weapons, food and medicine in Jalawla region.

Indeed, as far back as December, Majid al-Gharawi, Iraqi Parliamentary Security and Defense Commission Member of Parliament, said that US aircraft were supplying Islamic State in several locations, stating that the USA and its allies "are not serious in fighting against the ISIL organization because they have the technological power to determine the presence of ISIL gunmen and destroy them in one month".

Jome Divan, leader of the al-Sadr bloc in Iraq's Parliament, claims that "The coalition has not targeted ISIL's main positions in Iraq". Nahlah al-Hababi, senior Iraqi parliamentarian, considers that "the international coalition is not serious about air strikes on ISIL terrorists and is even seeking to take out the popular forces from the battlefield".

She added that the precision air strikes are launched in areas where the Kurds are fighting, to help the Kurdish Peshmerga but the strikes in other areas are not so precise.

Conclusions: As stated in this column at the time, when the US-led coalition decided to breach every fiber of international law in 2003, attacking Iraq based upon lies, the foreign policy of the USA and its NATO allies would never again be able to claim one ounce of credibility. Unfortunately since then nothing has been done to redress the situation, in fact the conviction that the pariahs in this world are the USA and its NATO allies (the more active and aggressive ones, namely the FUKUS Axis - France, UK, US) has only been underlined and confirmed.

There will be those who do not believe the Iranian news agency which quotes these multiple sources, and would only give any credibility to a western corporate media outlet. But it is precisely the western media that lies all the time, bases stories upon invention and imagination, and presents a squeaky-clean media package daily which runs along the same lines as the caprices of the lobbies which control these media groups.

Informed people these days go to the social media to find out what is really going on. And for what reasons should we disbelieve Fars news agency? With so many voices saying the same thing?

As for Islamic State, quite apart from the humanitarian crimes, such as murdering children for reasons known only to a psychopath, raping girls, beheading women for wearing red jackets, the World Heritage they have already destroyed belongs to humankind, not to them and anyway how can statues from ancient times, which were built before Islam existed, thousands of years before Islam existed, be considered as idolatrous? These crimes are a cultural outrage. The ancient Assyrian city of Nimrud, which was already ancient when Alexander the Great passed by and saw it before the Romans existed, will, for the best reasons, remain forever in the hearts and minds of humankind. Islamic State and those who fund, aid, abet and arm it, will do so for the very worst.