Pledge of the New Republican Party

As a candidate for political office in the New Republican Party I HEREBY PLEDGE: 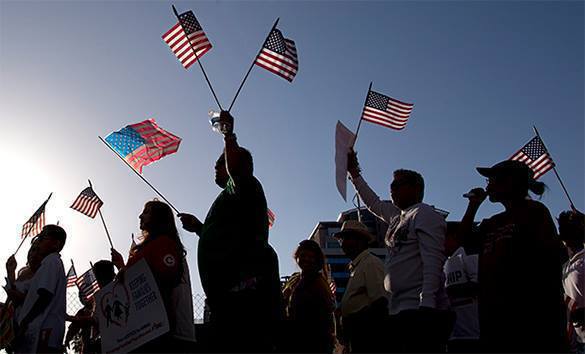 1.      To prey upon the gullibility of members of the Middle Class, and to exploit their irrational hatred of the poor, by pretending to support their interests while screwing them over at every opportunity;

2.     To fully partake in the legalized bribery sanctioned by the United States Supreme Court in its corruption endorsing Citizens United and McCutcheon cases;

3.     To ensure that the rich and privileged become richer and more privileged;

5.     To call myself "pro-life" when it comes to the unborn, yet not give a damn about the health and well-being of people already here;

6.     To place the reproductive choices of women into the hands of rich, white men and pseudo-Christian businesses, and to only respect women who do not insist on being treated like human beings;

7.     To hate Mexicans, African-Americans, immigrants, Native-Americans, LGBT people, people of different religions, unarmed people killed by cops and wannabe cops, and those who complain about it;

9.     To fully exploit my alleged Christianity for self-serving political gain;

By faithfully following this ten point pledge, our party can, in the words of our presidential candidate, "Make America hate, [oops, I mean] great again."

Although the above "Pledge" is satire, like most satire it is grounded in truth.  The Citizens United case, for example, theoretically gave "free speech" rights to both corporations and labor unions.  Yet, what happened in reality is Republican governors in several states, like Wisconsin, Michigan, and Indiana, passed deceptively named "right-to-work" laws that both undermine the financial ability of labor unions to engage in "free" speech (thus leaving corporations the only effective voice in the political arena), and depress wages so that the middle-class has to work harder and longer for less.

Also, let's not forget the numerous Republican attacks on the Health Care Reform Act (aka Obamacare), which currently provides health insurance to many Americans once unable to afford it.  In perhaps the most egregious attack to date, Republicans recently won a lawsuit that declared portions of this act unconstitutional.

The judge that made this ruling was none other than Rosemary Collyer, a sociopathic, Bush-appointed, judicial "magician," who makes her alleged "respect" for the Constitution appear or disappear based upon her personal and political biases.

For example, Collyer conveniently ignored the very existence of the Constitution when she decided that the president of the United States has unbridled authority to extrajudicially execute American citizens, yet she invoked this same Constitution in her anti-Obamacare ruling-a ruling that experts predict will result in increased health insurance premiums for millions of Americans, and the ultimate loss of such insurance for many of them.

One must also remember the United States Supreme Court's ludicrous decision in the Hobby Lobby case, where a group of predominantly white, rich, male Supreme Court "justices" decided that artificially created entities, otherwise known as "corporations," can have "religion," and therefore deny benefits to their employees based upon these alleged "religious" beliefs.

In addition, pundits, and even casual observers, cannot begin to follow America's current presidential campaign, and the events leading up to it, without discerning the role hatred is playing in "electing" a new "leader":  Republican candidate Donald Trump, for example, denounced Mexicans seeking to immigrate to the United States as drug dealers, criminals, and rapists, and even suggested building a wall on the American-Mexican border; Trump was also slow to disavow the open support of white-supremacists, even as African-Americans were being castigated by "conservative" media for their protests against police violence and for creating the "Black Lives Matter" movement; victims of such violence, like Trayvon Martin (killed by wannabe cop George Zimmerman), and Eric Garner were branded as "thugs" deserving of death for wearing "hoodies" or selling untaxed cigarettes; and some Republican-controlled states endeavored to ban Syrian refugees, while Trump called for a "total and complete shutdown of Muslims entering the United States."

And, finally, let's not forget the relentless attacks on the LGBT communities ever since same-sex marriages were legalized.  Republican governors in North Carolina and Mississippi have passed laws openly allowing discrimination, and Republican politicians in several other states are unabashedly expressing contempt for members of these communities.

In fact, so rabid is this lust for discrimination that the Republican leadership in the House of Representatives recently used despicable machinations to defeat an amendment designed to protect the LGBT communities against discrimination, when Republican House majority leader Kevin McCarthy disingenuously extended the two minute time limit representatives originally had to vote on this amendment (which stood an excellent chance of passing) to eight minutes, so he could strong-arm his colleagues into changing their votes  The amendment's sponsor, Sean Patrick Maloney, later stated that the children of these Republicans "will remember [their] hate," and even some Republicans called McCarthy's tactics "bullsh*t."

So near the truth

These examples illustrate that the Pledge above is, unfortunately, not very far from the truth when it comes to the "New" Republican Party.  But, regardless of whether one is a Democrat, Republican, or Independent, it would seem that a highly-educated nation like America could find political candidates far superior to the garbage it is being offered.

Perhaps this lack of quality candidates is because most decent, honorable people find the dishonesty, venality, and negativity of politics repulsive, or maybe it's because the two-party system is corruptly rigged against them.  Either way, it is clear that all the hyperbole and aspirations about "hope," and "change" that routinely accompany political elections are pipe-dreams.

After all, even when you place garbage on silver-serving trays, and set these trays on tablecloths made of the finest silk, it is still garbage.

USA: Civil war elections OK for Ukraine, but not OK for Syria
19:40
Putin answers question about further mobilisation in Russia
16:32
Putin meets mothers of Russian servicemen who take part in special operation in Ukraine
15:26
Crimean governor denies reports about Iranian instructors killed in Crimea
14:12
Zelensky continues talking rubbish instead of peace
19:52
Patriot air defense systems in Ukraine will be powerless against Russian missiles
18:08
Zelensky plans to mobilise all Russian-speaking people to get rid of them on battlefield
16:55
Moscow responds to Emmanuel Macron's criticism of Ukraine missile strikes
15:51
Zelensky and the West make Ukrainian people experience hardest winter of all times
14:27
Russia passes new law banning LGBT propaganda in nearly all spheres of social life
19:54
Mountain skier survives as avalanche carries him down the mountain
US skinhead mercenary admits Russia had good reason to launch special operation